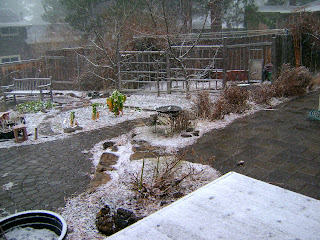 Hmmm, doesn't look like the sunbathing session is going to pan out today. OK, I'll clean out the brooder instead.
'Brooder' being a ten dollar word to describe a large (free) cardboard box filled with wood shavings, and with a heat lamp suspended above it, in our garage. 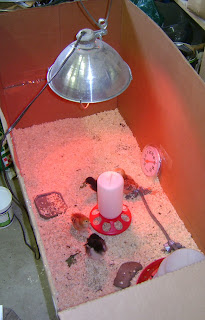 I consider the whole setup fairly professional. First, the overview: 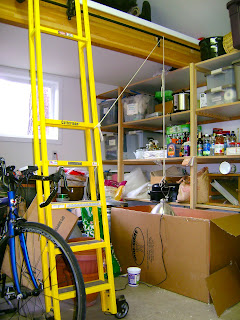 Girl Scout knot, possibly a half hitch. Whatever that is. Height adjustment achieved by moving rolling ladder. 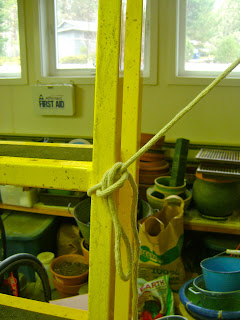 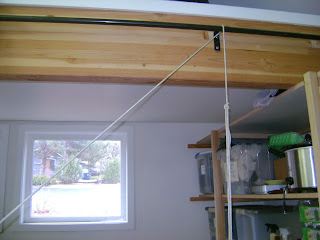 When I got my first peeps 2 years ago, I was going on book larnin' and internet research. I was pretty tentative when it came to 'taming' them. When they all ran away from me, cheeping in terror, on the first day I brought them home, I assumed they would get used to me in time, sort of by osmosis. That didn't happen, though, and it wasn't until they were sexually mature and started laying, and went into "I am a hen, this tall being must be a rooster, I will submit" was I able to touch any of them again.

Since then I have learned a few things. Mainly, entice them with some irresistible food from the very beginning, and they will think I am the hot ticket. Baby chicks aren't interested in much yet -- mine showed no interest in minced hard-boiled egg, fresh weeds from the garden, or chopped nuts. But I had an ace up my sleeve -- something I learned about long ago, that chickens go apeshit over: 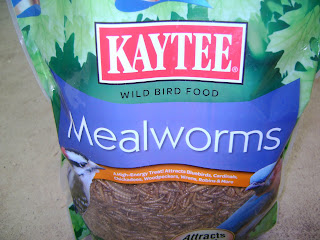 I only recently found these 'freshly oven roasted' (ie dried) mealworms at the feed store. Before that, it had been expensive little tubs of live worms that I kept in the frig and doled out like gold coins when I needed to lure the girls back to their coop. I haven't tried the live ones on these peeps yet, but they go like crazy for the dried ones. Love this on the package: 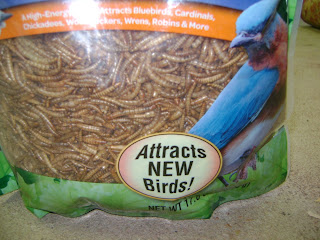 So today I took the peeps out of their big box and added fresh wood shavings, water, etc. while they roamed around the garage. I've been letting them out for a little while each day, just for the cuteness of it, and so they don't have to spend 24 hours a day staring at a brown cardboard wall. Now that they are onto me as Mealworm Provider, I have to step very slowly & carefully to avoid squashing them -- they are right at my heels most of the time. 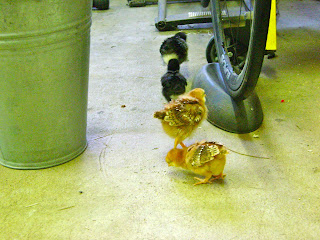 When I sit down to watch their antics, they come running/flying/scooting over and jump up into my lap. Oh, the cuteness. 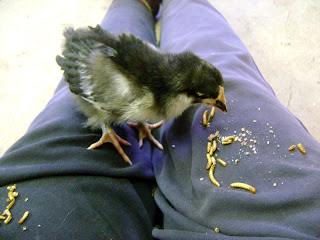 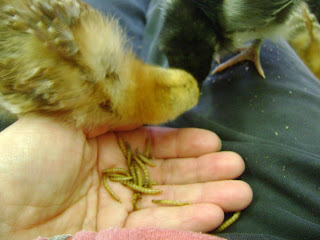 I think it also helps that I didn't get 4 chicks all at once. I got just two at first, and had a whole week to get them used to me (ie excited about mealworms) before I got the second two. The new babies just follow the older, more experienced babies and they are all confirmed mealworm addicts at the ripe old ages of 19 and 12 days old.

The difference between the two pairs of chicks, only one week apart in age, is amazing. The older ones are probably twice the size of the younger. Here they are, side by side. 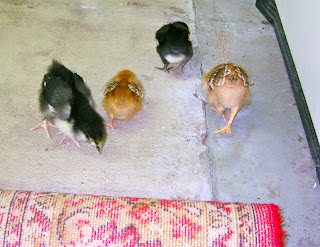 I was worried the older ones might pick on the younger, but haven't seen any evidence of that at all. This time I decided to get two of each color, so as to minimize 'differentness' -- something I didn't know would be a problem when I picked out my first flock 2 years ago. In my lust to have as many different breeds as possible, I got one each of 6 different breeds, and the pecking order thing boiled down instantly into 'everyone whomp on the one who is most different' -- which turned out to be my poor Babe. She had 4 strikes against her: she was black (everyone else was striped, speckled or light-colored), she was a bantam (I learned later that bantams do tend to get bullied in mixed flocks), she was a frizzle (feathers turn outward instead of lying flat against the body), and she joined the flock almost 3 weeks after the other girls, so was always behind.

I have two Rhode Island Reds (Rosie above and Pippa below) 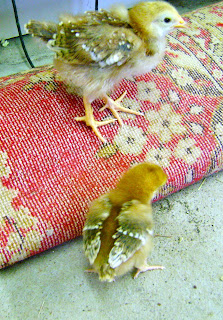 one Australorp (Sam, for Samantha) 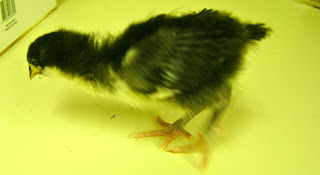 and one Black Sex Link (not named yet -- I need something sweet and unassuming, like this chick's personality so far) -- both of these last two will be all black. 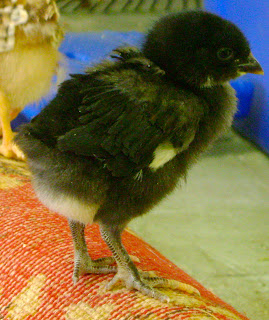 Here you can see that Rosie, the older chick, is already developing pinfeathers, entering the early stages of that awkward teenager-with-zits look chickens have between newly hatched cuteness and almost-mature, ready-to-start-laying, yes-I-am-a-pullet phase at 4-5 months old. Like many teenagers, both the older chicks are all legs. 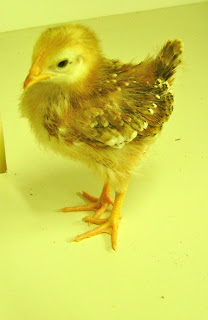 while Pippa and ??? are still adorably round and downy. 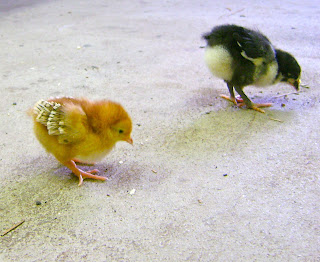 Even at this young age, they have dinosaur feet! 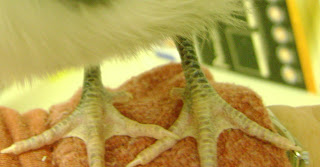 Mealworms eaten, chicks returned to their box, I have one more little task: 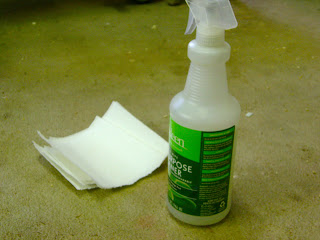