Rain in the desert

It is raining today. Not a summer thunderstorm. Not a misty desert drizzle. A really basic, settle-down-and-rain kind of rain, something we get only once or twice a year. Certainly not in August, in the normal cycle of the seasons. But this year has been off-the-charts nutty, starting with the winter that never ended but morphed without preamble into a long, soggy, Willamette Valley-style 'spring' and then continued (winter) all through June (frost!), and reluctantly turned into summer only in July. This is fall weather -- does it mean our summer is over? Hey weather dudes, this is simply not on!

Still, the sound of rain is always lovely to me. Except for my college years, spent in the redwood jungle of northern California, I have always lived in dry climate zones: from Mediterranean to High Desert. I've traveled a bit in the MidWest in summer and can't say I could ever live in that kind of humidity. So the sound, smell and sight of rain is welcome to me, always.


The kitties are disgusted and have settled happily into warm nooks indoors. The chickens are having an indoor 'time out'. My girl Betty has laid an egg a day (with one day off) since she started laying on my birthday. Hawkeye, my Ameraucana, laid her first (green) egg yesterday, alas, on the floor of the henhouse rather than in a nice nest box. But still, it shows a proper spirit of henliness. Nothing so far today, but it's a start. As for the other girls -- ahem, ladies -- can you read my lips? can you say ' we are slackers'? I'm hoping that spending a day inside, staring at Betty's latest effort, will inspire everyone else to get with the program.

I have a lot of indoor jobs I could be doing. Phone calls. Lesson planning for the upcoming year of piano teaching.

Or I could look through some of the books I recently checked out of the library for inspiration in designing a new garden border. 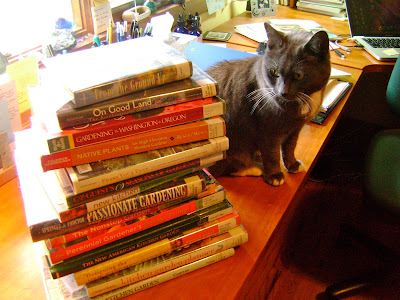 Oops, Alix doesn't approve of any activity that doesn't involve adoring (and petting) her. 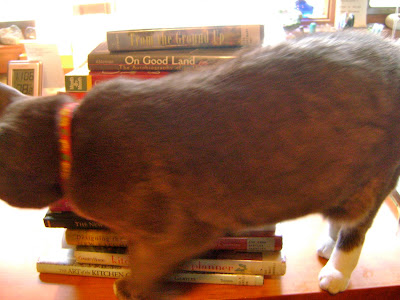 But ok, blogger full disclosure forces me to admit that, yes, after I went outside to take photos in the rain, I came inside and .... 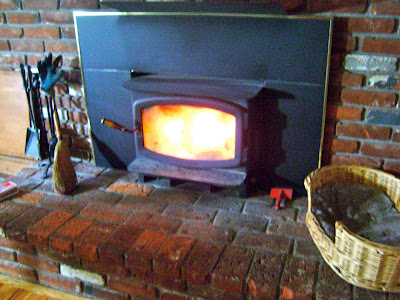 built a fire.
Posted by Unknown at 10:08 AM No comments: Links to this post

Is it a trend? 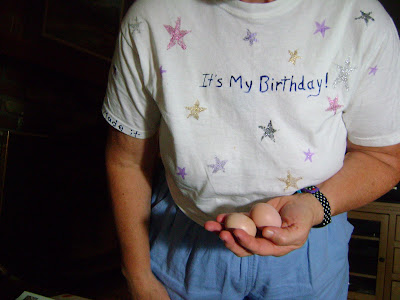 Being fairly new to the chicken ranching biz, I am still figuring things out. Quite often during the whirlwind of the past months, I have found myself -- or more probably, put myself -- in the mode of scientific researcher. Although I have read everything I could get my hands on about raising chickens, I have attended classes and visited other people's coops, and talked up every feed store employee I could drag into my clutches, there is still a lot I just don't know, and will have to wait to see for myself, about chickens.

This makes it all the more enjoyable for me, as I have a slight scientific bent, at least for small personal things in my own world. As far as 'The First Egg' goes, I know that new hens take a while to get the egg-laying thing sorted out. The first eggs are often small and/or oddly shaped. But there are other mysteries yet to be seen and questions yet to be answered.

The girlies have 2 nest boxes, and the straw bedding in both boxes has been trampled down by ???? hens unknown over the past week and more. The first wee egg was laid in the right hand box, and I know it was laid by Betty because she has been quite conspicuously hovering around the place and looks, to my admittedly novice eye, to be the most sexually mature (ie ready to start laying) of all the girls.

But yesterday there was a second egg, laid in the left hand nest box. It is about the same size as the first, maybe a little bit larger, and a slightly different color. The question is, is this Betty's second egg, or is it someone else's? Do hens usually lay in the same place, or do they vary their nest? Does each hen lay a particular hue of egg, or does that vary?

Time will tell, I am sure. And I am quite curious to see where today's egg (see how confident I am that we are well-launched into the full egg-laying mode?) is laid. And if it will be larger, or a different color? 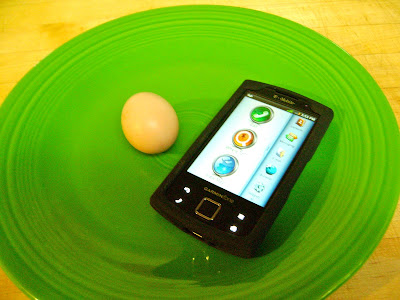 Here it is in a nutshell. Er, eggshell. I had a most satisfactory birthday yesterday, consisting of heights of high-tech and the most basic of low-tech.

It started out with a spot of electritioning by my sweetheart. The most spoiled chickens in the world now have a light in their henhouse, for egg-encouragement during the shortening days of fall and oncoming winter. I don't want them to stop laying before they even start, do I. So they have a light and an automatic timer to turn it on for a few extra hours in the morning and in the early evening. High tech. 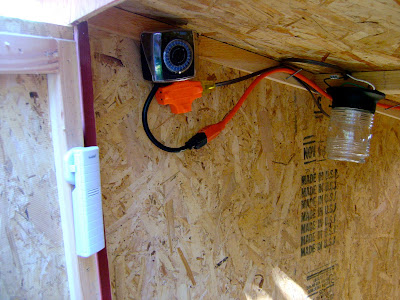 They also have a remote sensor for a 'weather station' (fancy name for a thermometer readout) which sits on my desk. When I get up in the morning I want to know how my girls are doing! More high tech. When I took this photo around 1:00 pm it showed it was 102 F in the henhouse! Poor dears! Maybe a little fan or mini AC unit is needed? 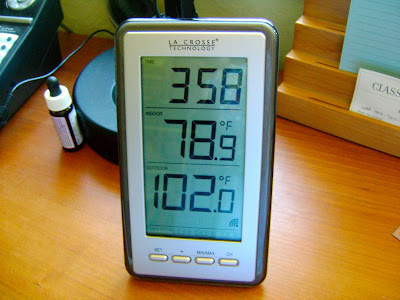 Meanwhile, I was down at my local acupuncturist's office, getting a special birthday treatment. Definitely low tech.

Then my boon companion and I set out to pick out rocks for a garden project I have been stalled on for a couple of years. Namely, turning this mess 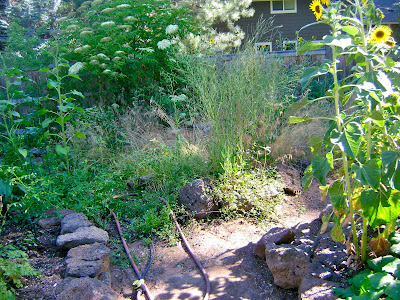 into a nice backyard oasis, with gravel paths and a flagstone-paved sitting area.

Rocks. How low-tech can you get? Especially since they will be installed by hand. Hands. My hands.

But then, instead of heading back towards home, my chaffeur for the day pointed the car east, towards one of the ubiquitously ugly local big box store shopping centers. He was looking forward to setting me up with a cell phone made earlier than 1806. I have had my current cell phone -- begrudgingly -- for about 5 years. I say begrudgingly because I didn't really want one in the first place, but accepted a hand-me-down phone (I was its 3rd owner) only because I was going on a trip without my ace travel companion and needed to be able to call for moral support, etc.

I admit I am still baffled when I see people walking around, talking all the time on their mobile phones. I barely want to talk on the phone when I am home -- why would I want to be pestered by the damn things when I am out in the world? I know that attitude makes me a dinosaur, and I'm ok with that. So it has been perfectly appropriate that I have been using a dinosaur cell phone all this time too. Witness my 10-year old cell phone -- battered, hard to use, and possessing only three functions. Making & receiving calls, sending & receiving texts, and something else. 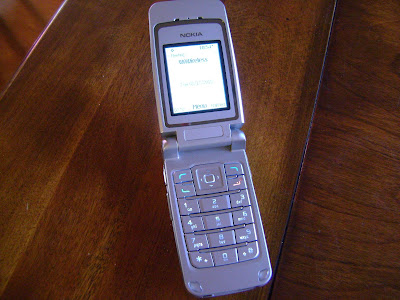 Since I got it, it has boldly proclaimed, on its front display, the cryptic word 'Meeting'. I have asked everyone I know, I have searched the manual 3 separate times, and have never been able to remove it. Ironically, and not too surprisingly, once or twice a month, I actually do have a meeting, but of course since I haven't input that information into the phone, I ignore it. 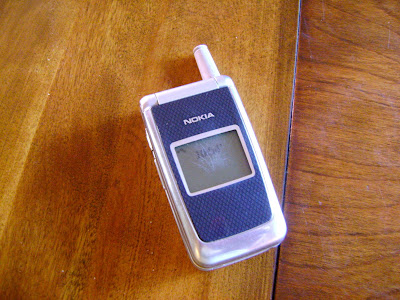 I think we can agree to put this in the 'low tech of high tech' category.

We emerged from the T-Mobile store an hour or so later, with a coolest-of-the-cool, newest-of-the-new (until next week), smarter-than-I-am smart phone. Here's the fun part for me -- aside from the colorful icons which I adore. It not only has a GPS in it -- it IS a GPS. This is one of those epic, life-fulfilling moments one gets if one stays around long enough and is lucky, I suppose.

For the last decade or so I have watched with amazement, I suppose along with everyone else my age, the leaps and bounds forward of all things digital and cyber. But one of the cool things that has managed to sneak up on me is this whole GPS phenomenon. You see, I am responsible for it. Not directly, but through 50+ years of wishing, hoping, fantasizing and just plain magic. I have had a terrible sense (ie no sense) of direction my whole life long. When I was a kid this only resulted in my losing my family now and then on vacations or in large department stores. Nothing too scarring.

But beginning when I got my driver's license I became more and more aware that what the world needed was some kind of device in the car that would have a map in it, know where the car was, and could then show you the route in live-action visuals. I admit I didn't go so far in my imaginings as to think there would be a voice attached to it. If I had, I would have expected an exasperated male voice saying things like: 'no, no, not THAT way. Turn around right now and go back to where I told you to turn.' or 'you IDIOT! why are you taking this exit? you're going to end up on the wrong side of the river -- again!'

And here I am 61 years old, and I've managed to live along to the day when there is such a thing. I tell ya.

The smart-ass phone has a little mount for the dashboard, and it is easy as anything to tell it where you want to go. You clip it in, and out comes a soothing female voice that never calls you names, never loses patience, and never accepts defeat. She didn't know about a couple of recent changes, but we'll give her a chance to learn. I've named her Grace. Highest of high tech (for me).

And then, for the final glorious moment of the day, we returned home to find out that my favorite chicken, Betty 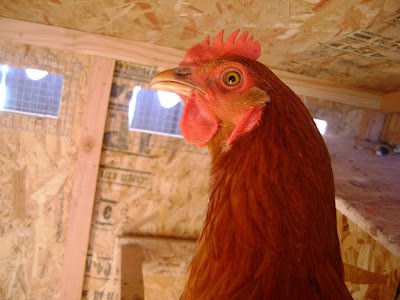 had laid the first egg in our happy new flock. 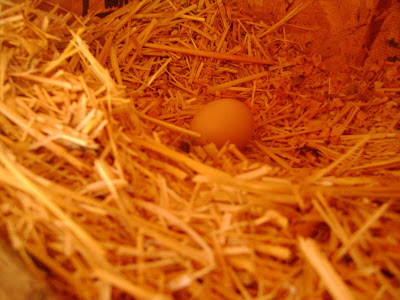 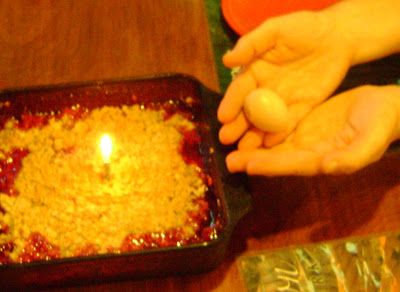 Posted by Unknown at 8:52 AM 3 comments: Links to this post