Uncharacteristically, I watched a lot of the London Olympics. Catalyzed by the success of the British bike racing team at the Tour de France, I was curious to see how they would do at the Olympics in their home country. Thanks to a free app, I was able to watch many events live on my iPad. Here is the view of my breakfast table one day, with three cyber devices operating simultaneously. 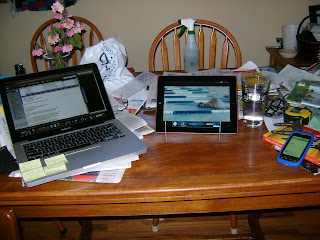 Doing email on my laptop, watching live swimming on my iPad, following on-location OlympicsTweets from a local guy on my smartypants phone. And eating.

Normally I don't watch people throwing odd-shaped, heavy and/or pointed objects, jumping over things, or running very fast in circles. But a local guy, Ashton Eaton, was competing in the decathlon, and was a favorite to win. Not that I know Ashton, but he seemed like such a nice kid, and sure enough, he won. Bend went Ashton Eaton crazy, before, during and after the games. A huge crowd gathered at a downtown theatre to watch the final decathlon events live on the big screen. School reader boards, tee shirt stores, dry cleaners, grocery stores and sandwich shops boasted signs saying 'Bend Loves Ashton Eaton'. And after the games were over and all the appearances on national tv, someone here in town came up with the idea of having a welcome home parade for Ashton.

For various reasons, Bend is the home of a number of other past Olympians, many of whom participated in nordic skiing, but also in track & field and other events. They too were invited to join the parade, with a few short speeches planned for the end of the parade route.

My sweetheart and I couldn't resist being part of such a hero's welcome, and along with several thousand other people, we walked downtown Sunday afternoon to watch the parade. I don't know when I've seen this many people downtown, certainly not for the annual Christmas parade or the 4th of July parade 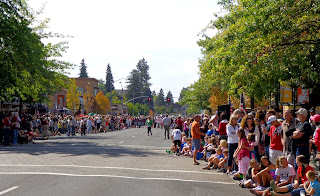 First there were policemen on motorcycles, 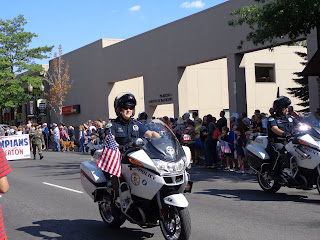 followed by a bunch of people wearing military uniforms and twirling guns.
Some really nice signs 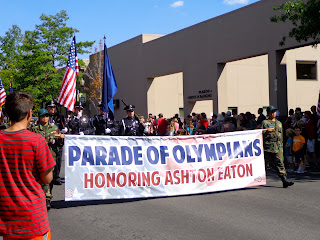 then a bright red bus, borrowed for the occasion from a new company that gives tours of our town. 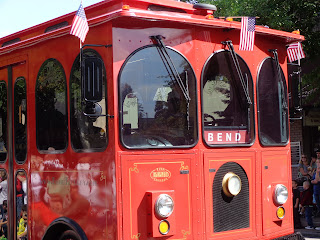 Hmmm, I wonder who's in the bus? Aha! The old fart Dixieland band - excellent 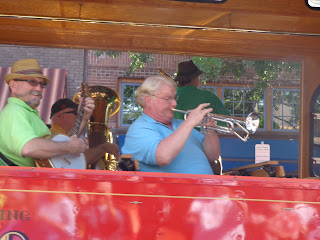 Before moving to Bend, Ashton lived the first 6 years of his life in the small town of LaPine, 35 miles south of here. LaPineans are as proud of Ashton as the Bendonians, so they had a vehicle of their own in the parade. 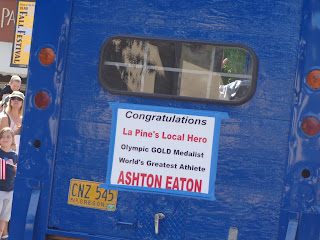 This being very small town America, next we had 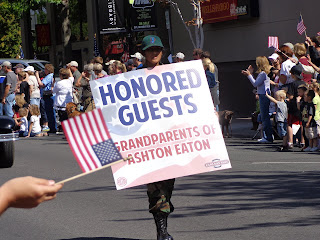 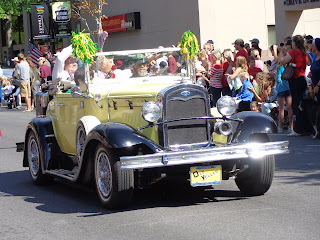 Next came the past Olympians, many of them wearing the various USA uniforms from the Olympics year they attended, with a few Special Olympics and Paralympians for good measure. 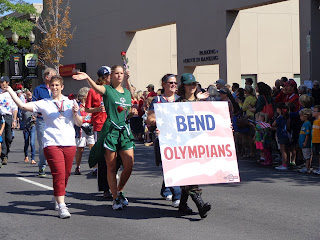 You have to have some of these 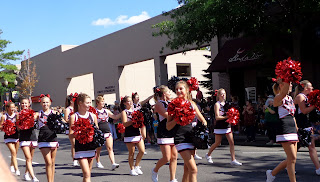 and some of these 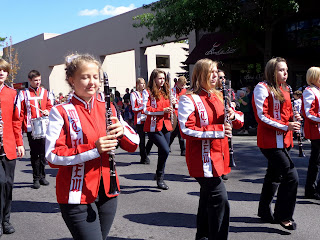 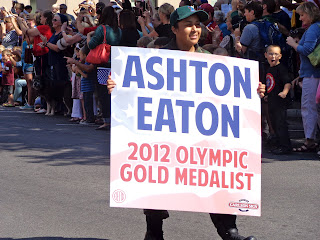 not riding on a float or the back of a fancy convertible, but just walking down the street in jeans and a tee shirt, with his Olympic gold medal around his neck, waving to the crowd, smiling and jumping up and down with pleasure, 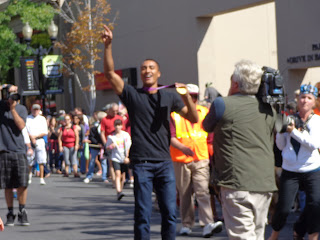 sorry it's blurry, but he was so sweet, waving and holding up his medal.
At the end of the parade, he waded through the huge crowd and vaulted up onto the dais below the theatre marquee 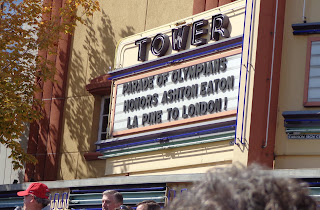 politely listened to a speeches by local officials 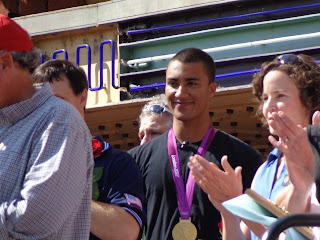 and a short speech by his mom 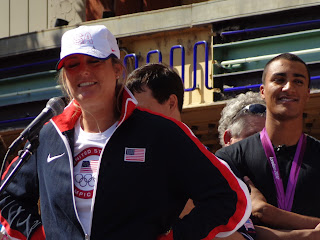 Then he spoke briefly, saying how thankful he was to have grown up in this community, and he said something like "this (the gold medal) was for you". He truly seems to be a sweet, humble person. In an interview afterward, both he and his mother expressed amazement at how many people turned out for the parade. "Wow" was what they said to each other when the parade started. 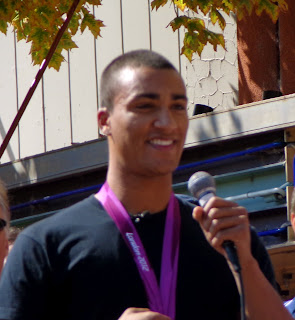 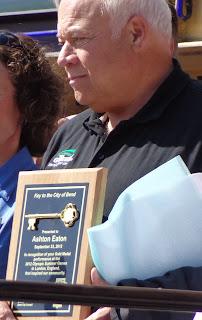 The huge crowd listened and cheered 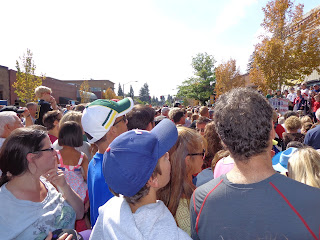 A sea of faces 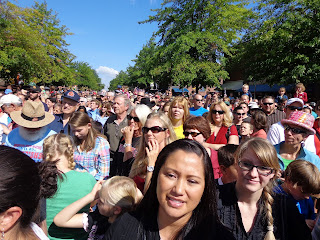 After that, Ashton hopped down from the platform, a path was cleared down the middle of the street for a couple of blocks, and he led an informal 'run' of the littlest kids, down and back. We left to grab lunch, but apparently the line for autographs afterward stretched for many blocks, and people waited patiently and cheerily to talk with him.
There's something about the Olympics, isn't there? It's not a world championship or, for the vast majority of the athletes, even the medalists, it doesn't lead to a lucrative career in sports or monetary payback or endorsements. 10 or 20 or 30 or 40 years later, Olympians look back and most of them, having gone on to live quite ordinary lives in many cases, must reflect that in the end, they did it for themselves.
Posted by Unknown at 6:51 PM No comments: Links to this post

The forests of the arid Western US have a fire-based ecology. Fires are a normal part of the forest regeneration process, and without all of us pesky humans, naturally occurring wildfires would be no big deal as far as Mother Nature is concerned. But we WILL build our homes and cities in and around the forests, and thus fires like the Pole Creek fire, 6 miles west of Sisters OR is a very big deal. 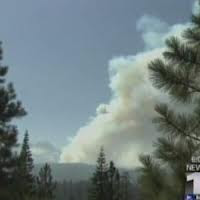 This fire started 11 days ago, high in the mountains of the Central Oregon Cascades. By this morning it has grown to over 17,000 acres and is reported as 20% contained. Smoke moves in choking waves over various communities, depending on wind direction. Yesterday I took these shots of the smoke, rolling into town from the fire to the northwest of us. The sun was just setting, a red, flattened ball over the mountain skyline (which was invisible through the murk), but I didn't catch a photo because I was driving.
Here is one of the waves, coming in low and backlit by the sun. 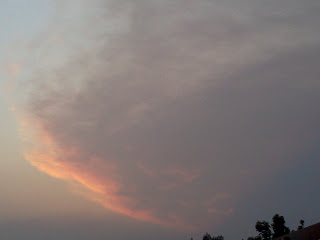 Here you can see another cloud higher up, through the lower level smoke. 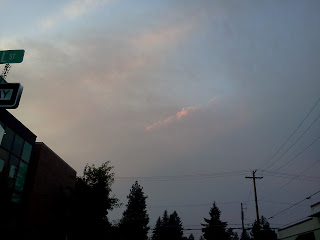 The sky was beautiful in a majestic but sobering way.

Of course Bend isn't getting the worst of it, as we are 20 miles or so away from the fire. Towns and folks on ranches closer to the fire are really having a tough time. Here is a cool photo from NASA, showing the Pole Creek fire and other big fires currently burning around the West: 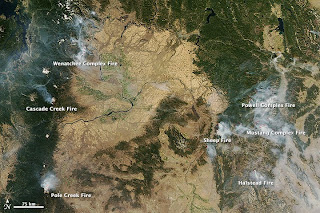 Our normally fabulous warm, clear, sunny fall days are now a bit of a curse, as there is just about zero chance of rain for weeks and weeks. So we check the wind direction before setting out into the woods for a bike ride, hike or just a walk around the neighborhood, and try to spend as little time outdoors, breathing smoke, as we can. Readers, please think rain (but not lightning).