It must be time to introduce this blog's namesake, Arabella Branan Genge Gault -- my paternal grandmother. I chose the name 'Arabella's Garden' for this blog partly because it started with 'A' and thus would head any imagined favorite list of blogs, and partly because my first choice of name 'The View From Home' was already taken. But the biggest reason was that my grandmother was a huge influence on my life as a gardener, and I still think of her often when I admire my asparagus bed, or watch my chickens. However, it wasn't until long after I planted my first garden (see previous post) that I thought back and realized how much about gardening I had absorbed from her in my earliest childhood.

This photo shows her as I remember her first and best, probably in the late 1950's, when she was in her late 60's. 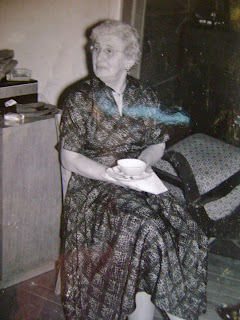 When I first remember her, she was living on a farm in Illinois, whence she had moved after my grandfather LEFT HER FOR ANOTHER (YOUNGER) WOMAN sometime in the 1950's! Fairly shocking in those days, particularly for people in their 60's, but at my age I was oblivious and thought nothing of it. Although she loved her farm, and all her animals, she suffered terribly from arthritis even then and the winters were hard on her, so she began escaping by traveling during the coldest months. She took several ocean cruises, though, unlike the luxury liners of today, these were mostly simple accommodations aboard commercial ships. I'm sorry my memory isn't better -- or more likely, I just wasn't paying attention because I just accepted what I heard without questioning. One trip was on a Norwegian freighter, with just a handful of other passengers -- all single, older women, I believe.

**** Ha! I lied! Paging through her trip journal from 1961, I found a newspaper cutting from the L.A. paper, about her cruise of that year. It says: "(headline) Norwegian Tour Ship to Be Welcomed Here. "Elaborate welcome is planned at Los Angeles Harbor today when the Norwegian cruise ship Bergensfjord arrives between 8 and 9 am on a west-bound cruise around the world. The ship, carrying 371 cruise passengers, will embark 87 more tourists here at Berth 232 D, Terminal Island before leaving at 4 pm for Honolulu." I wonder where I got the idea these were budget trips? I would have been 11 years old and obviously wasn't paying attention to the details. Also had no clue about money. ****


She made long-lasting friendships on these trips, and kept in touch with them long after her traveling days were over. I remember one trip she decided she was going to learn to knit, and, optimistically, she took along needles and a big ball of black yarn to practice. She came home with a big ball of yarn, stretched limp from being knit, ripped out, reknit, ripped out, over and over again. She was not a crafty person, and gave it up, gladly, long before she returned to the States. I'm pretty sure I inherited her lack of knitting talent.

Here are a couple of photos from a Mediterranean trip she took in 1959, at age 67, visiting such ports as Funchal (Madeira), Rabat (Morocco), Tangier, Malta, Alexandria, Naples, Capri, Dubrovnik and Cairo. Here is a great photo of her in Casablanca 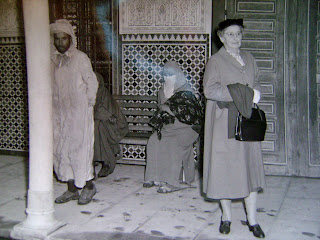 Don't you love the faces in this photo? Grandmother, gazing off into the distance, probably thinking about the beautiful tiles in the wall behind her. A rather furtive-looking Arab guy, looking at the camera, and two heavily veiled women, one of them looking up curiously and am I imagining it -- mischievously?

Here's another, obviously from Egypt. Presumably the two other ladies were her traveling companions, but who is the guy in the fez on the fourth camel? 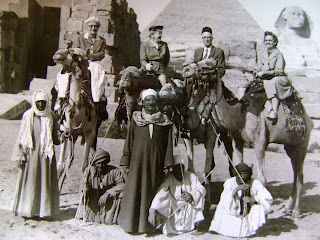 Grandmother loved riding, and had horses at home on the farm. I wonder what it was like for her to bestride a camel? Showin' a bit of leg, there, Billy! 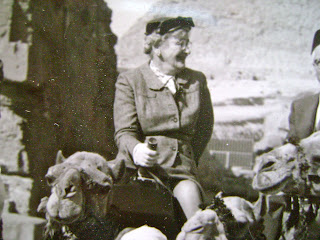 I don't know how many of these trips she made in all -- my memory is, only a few. After that she began coming out to California to stay with us over Christmas, which evolved into her renting a room in a house nearby for the entire winter. Eventually her arthritis became so bad she couldn't manage the farm at all, so she sold it and moved out to California for good. She moved into a nice retirement home and 'farmed' her back patio. More on that another time.

Recently I unearthed some old family papers, and found this photo of Arabella much earlier in her life. No date on the back, but her married name, so possibly after 1913, the year she married my grandfather. Does she look 22? 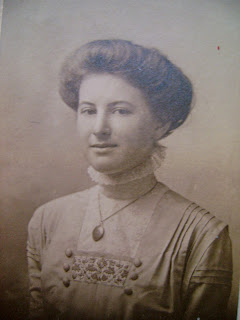 It occurs to me that my grandmother is almost exactly the age of the daughters in Downton Abbey -- probably Mary's age, the oldest. Though a middle class American rather than an English aristocrat, her life would have encompassed the same kinds of social and economic forces that were opening up for people of that era: women's suffrage, labor rights, etc. She too lived through the Spanish Influenza epidemic, which killed her future brother-in-law, my grandfather's younger brother, in 1919. It's only 100 years (next year) since she married!

How strange a thing is time. As a child, I certainly never imagined looking like my grandmother, that old, old woman. Yet this photo shows a strong resemblance to a younger me, and, now that I am approaching the age Grandmother was when she began her travels, I marvel at her courage and sense of adventure, to set out to see the world in her 7th decade.