After all my talk this year about 'global warming this' and 'longer growing season that' I have been struck down in mid-soapbox oration by an unusually (for Bend in recent years) early first frost. According to the local OSU Extension Service, Bend has a frost-free(ish) growing season of 90 days or less, depending on your exact location in town. In many parts of town it's more like 70 days. That's a pathetically short time to mature warmth-lovers like tomatoes, corn, peppers, melons, and -- ahem -- sweet potatoes. It requires choosing varieties with extra fast maturity. When reading descriptions in seed catalogues, one must think 'sub-arctic' and 'tolerates cold soil'.

But last week, Sept 29, it happened. Not the total deep freeze of all night in the 20's, but cold enough that the tops of the tomatoes and beans were nipped black. I was reluctantly forced into my annual 'Dusk-to-Darkness Tomato Pick-a-thon' a couple of weeks earlier than usual. Since for some unknown reason which I may get into at some future date (when I figure it out) I had the bumper crop of all bumper tomato crops in my entire gardening life this summer, I actually have 'too many tomatoes'. Go ahead and laugh, people in balmy climes. I know this is nothing. But trust me, this NEVER happens here. 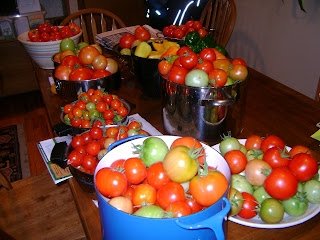 I bet it's been 10 years since we've had a hard frost this early. I define a 'hard' frost as one that actually comes down on the ground and affects my deck and garden plants. This is usually several degrees colder than the official temperature listed by the city, since our south-facing hill and my south-facing garden areas create a banana belt zone in our yard that protects everything for usually an extra week or two every fall.

I've just looked back at my garden records and see that I am lying. Uh oh, it's Old Timer's Syndrome, sneaking up on me ("why sonny, when I was your age, it snowed every year on the 4th of July. Many a year the fireworks froze in mid-air....."). THIS is why you write stuff down in a garden notebook, like the garden gurus always tell you to.

I guess instead feeling smug about my 'long' growing season and superior gardening prowess I'm only going to be able to be smug about keeping good records. This is why gardening in this climate makes people crazy. The only thing predictable about it is its unpredictability. Here's what I found when I went back:

Going further back, I see that in 1985 we had our first snowfall on Oct 7, but it didn't actually freeze that night so I successfully harvested tomatoes 2 days later. I have records back to 1974 (neener, neener), but that's enough weather facts for one day.

No wonder newcomers and oldtimers alike scratch their heads when trying to figure out how to garden here.
Posted by Unknown at 9:35 AM