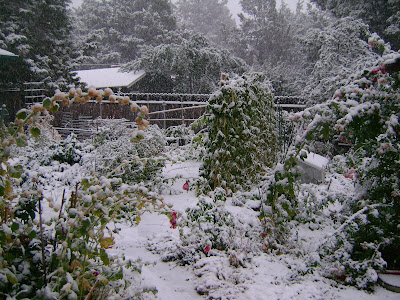 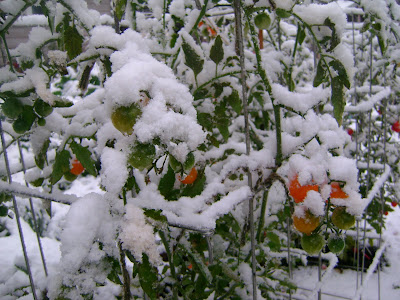 Harbinger of Doom? (ie we're having an early/hard winter?) or just our typical goofy weather? The forecast is for another day of this lot, then temps in the 60's F, rising to 67 on Friday. Go figure.

Not so bad, really. I got the tomatoes harvested and now I can get an early start on pulling up blackened vines and starting the next batch of compost. Most years I stall and stall until it's time to plant new ones in June. But this year, boy, will I be on top of things.

Yesterday was cold and er, rainy (except for the technically-not-snow that fell throughout the day) and I spent most of it cowering, I mean, sitting cozily by the fire, doing gainful indoor tasks. Around 4:00 pm I awoke to the fact that things were going to continue going south (not only the geese, but the temperatures) and if I wanted any of my geraniums and other tender container plants to survive, I'd better hop to it ASAP.

I'd like to be able to say that every year I do this pleasant task in a relaxed, slow-paced and responsible gardenerly manner. That is, I stroll around the deck and bring in a few pots at a time over a period of a week or so, as the temperatures tastefully lower in a gradual, civilized manner. But no. I think that's only happened once in my many decades of gardening. Normally it's a haphazard and desperate afternoon, sometimes on a crisp but sunny day, sometimes freezing-ass windy and raining, with me bundled up in wool hat and vest, the plants shivering and nervous in case I get impatient and start practicing triage sooner rather than later.

In many ways having a greenhouse is a disadvantage, since before I had the space, I had to fit everything into my tiny added-onto-the-carport sunporch. This pretty much limited overwintering to about 15 geraniums and a potted tomato or two. Now, although my greenhouse is small, 8' x 10', I am able to be somewhat greedy, and every fall I manage to squeeze a few more favorite guys in. 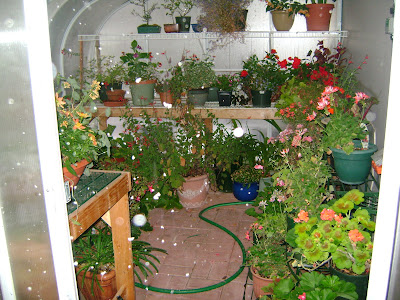 There are still some bigger plants that need to come in before it gets really cold. I left them outside yesterday because they are semi-hardy and can take some light frost and because I don't have any more room at the moment. Now comes the question of what to do about the melons and sweet potatoes, which are hognoiding the south wall of my greenhouse. The melon vines, though copious, have only a couple of small, presumably unripe melons hanging from them. I say presumably because they are somewhat smaller than I had imagined they would be, though how would I know? I've never grown these varieties before. The infamous sweet potatoes are also happily growing along, and I suppose will continue to grow until the next millennium, since the greenhouse will not freeze (I use a small space heater to keep the lows at around 38). Shall I cast these fellows out into the snow now or later? See how long the sweet potatoes grow but call it quits on the melons? The spirit of research is wavering... 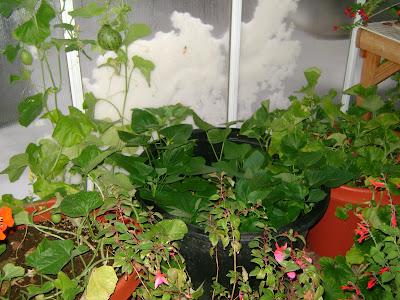