Let's just review the situation. We had seed greed. We ordered crazy things. We planted them in all trust, innocence and -- even in the face of Climatic Reality -- optimism. A clear case of Zonal Denial, but hey -- we gardeners are a bold and audacious lot. We love a challenge.

So there they were, tender green slips inserted in a big black tub in the greenhouse. We tended them. We nurtured them. We talked to them. And now that the um, harvest is mostly gathered in, and thoughts of Over the River and Through The Woods to Grandmother's House We Go (with visions of sweet potato pie dancing in our heads) are lurking on the subconscious horizon, it's time to display our magnificent sweet potato harvest to the world. Ready? Stand back, now. 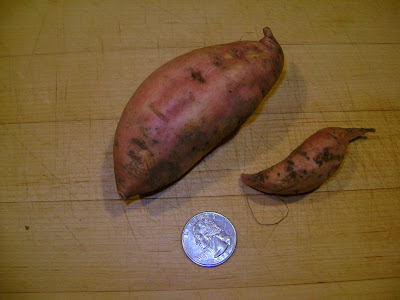 By the way, I had to use the macro-lens setting on my camera to get that shot. And just in case it's not totally apparent how truly tiny these tubers are, here's another photo, with my not-very-large hand in it to show scale. Ready? Here goes Take Two: 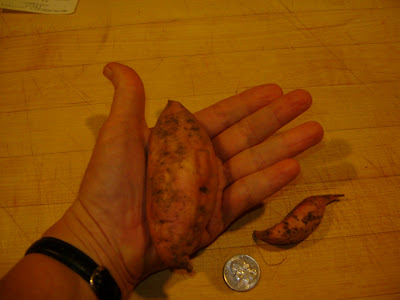 I'm going to blame these pathetic results on my own sweet self. The slips I planted were surely hardy enough. Remember? The literature that came with them promised me that Sweet Potatoes would produce my 'greatest gardening thrill ever'. It said that my harvest would consist of of big 'jumbo' size (2-3 lbs) potatoes. As I read on, I only wished I had ordered 2 dozen.

Lest you have forgotten their initial, rather desperate appearance, here is what they looked like on arrival from Territorial Seed Co in May: 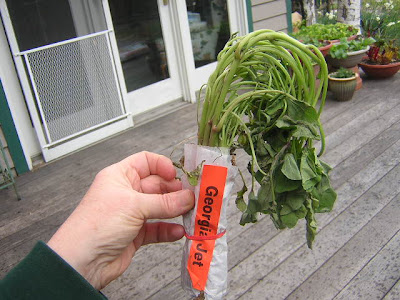 They looked fine in the early stages of growth. But then the crucial 6 weeks of early summer vanished in a puff of smoke and a whole lot of musical events which precluded the planned ongoing addition of soil, to gradually raise the level of the growing tops and create a big rooting area for massive tuber production. In short, the plants sat down in the bottom of the big, deep, black plastic tub and I suspect, had a hard time getting enough sun to really get going. Kind of like trying to grow in the bottom of a deep well. Hallllloooooooooooooo, little sweet patooties -- you down there? 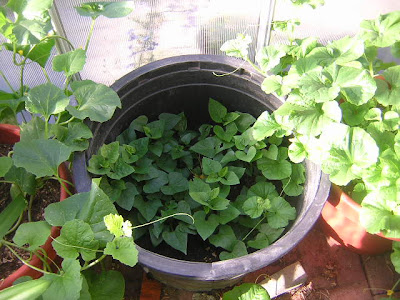 They did their best for me. But I failed them. And to be perfectly honest here, I got bored with the whole thing quite early on. I realized I don't really like sweet potatoes all that much. I didn't really want to bother with the whole soil addition thing. I won't say I exactly had Buyer's Remorse, but I will admit that I came to regret my spring seed greed, at least in the case of sweet potatoes.

So I will eat my tuberous bounty (in about 3 mouthfuls), thanking the sweet potato deva for the good effort, and put sweet potatoes on the list of vegetables I won't lose sleep over not being able to grow in future years.

Or at least until I forget and get a wild hankering to grow sweet potatoes, in 5 or 6 years. If that happens, please show me these photos?
Posted by Unknown at 8:25 AM