What do you mean it's September already?

Where did a month go? Lost in the vortex of getting-ready-to-start-teaching, combined with the intersection of a new camera and a new computer, all of which led to blog paralysis. My brief appearance as Julia Child is but a distant memory. Ironically, several of the people who were at the Sunday Dinner I wrote about in my last blog post are in actual France right now, eating actual French food prepared by actual French chefs. After my own lunch of free hot dogs at the local nursery's 'customer appreciation day' this afternoon, I had to hear about wild mushroom mousse, Duck Magret, simple green salad, local goat cheese and chocolate fondant. To console myself I had to quickly go back outside in order to fondle my newly-purchased ornamental grasses, awaiting planting in my front yard native plant berm. 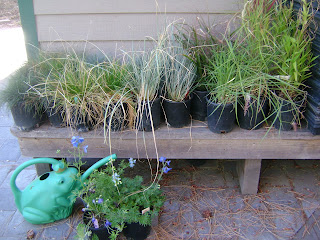 But that has to wait for cooler weather and the shift away from Harvest Insanity which is occurring at unprecedented levels this summer. I blame this partly on global warming. Nobody is going to convince me it's not a reality. With 35 years of gardening in this crazy climate under my belt, I can say unequivocally that it's warmer now than it used to be. I know, it's the classic old timer's rant ..... but it's true. I have evidence, in written temperature records from my earliest days in Bend. But the most undeniable evidence is from changes in my garden. Plants are not interested in arguments or what humans believe about climate and weather. They just get on with growing according to what IS.

In my garden, the plants know it's warmer because they aren't getting their little butts frozen off 2 or 3 times in the middle of summer. First fall frost is a good 2-3 weeks later, most years, than it was when I first moved to this house. In my early years here in Bend, I kept a supply of old sheets handy by the back door all summer long. Before heading off to bed each night, I would check the thermometer just outside, and if it was below 55 F I would go out and cover my tender babies; this occurred at least twice every year, sometimes 3 or 4 times.

Nowadays I rarely bother to check. Partly I'm more blase about the whole issue. Or call it philosophical. Or lazy. But in general, there just aren't that many close calls between, say, the end of June and the end of September. And most years I don't do the 10 pm final, desperate, pick-all-the-green-tomatoes blitz until early October. It's just plain warmer than it used to be, by day and by night.

It used to be that summer evenings (after sunset) were reliably cool, say high 50's down to low 40's, no matter the daytime temperatures. Our dry air just doesn't hold heat the way nice, humid air does, and our proximity to the Cascade mountains produces upslope winds by day and downslope winds by night, which creates dramatic diurnal temperature shifts. When we first came to Bend, nobody bothered with deck furniture because it was just too dang cold in the evenings to sit around outdoors. Oh, every couple of years or so we would have a week-long 'warm spell' sometime in July or August, when the days were 'hot' (90's) and the nights warm enough that you could wander around in shorts after dark. It always felt like a miracle, and on those few evenings you would see everyone out in the streets, strolling around with dazed looks on their faces.

Gradually this has changed, and people do buy deck furniture with some assurance of using it at least a few times in midsummer. But this summer in particular I have been noticing how much warmer our nights are. And so have my plants. Tomatoes are notably fussy about temperature, reportedly requiring nighttime minimums above 55 F in order to set fruit. Well, I'm here to tell you that my tomatoes are partying out there every night, because I have tomatoes like I've never had in my entire life. My frost protection sheets are still packed away in a closet somewhere. And for the first time in my entire gardening life, I have to figure out something to do with all the fruit. This is overtaxing my brain! I know people in 'normal' growing areas have a plan in place for this, but it's a whole new challenge for me. Oh yeah, food preservation.

So I have to do something about this: 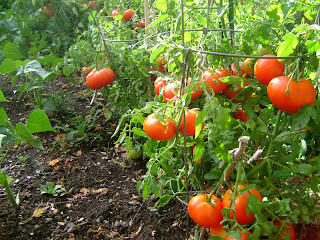 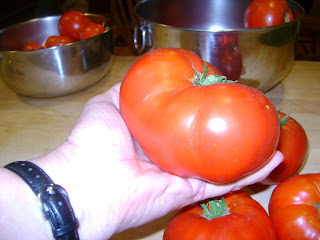