May the Force be with you

Our friends Andy and Ros in Scotland were planning their wedding, and invited us to come, with my sweetheart as Andy's Best Man. A high honor indeed. And an excellent excuse to head for one of our favorite places in the world: The Scottish Borders.

Preparations began in earnest last July, 10 months in advance, in order to get flights on FF miles. Even so, they weren't the greatest flights, including as they did a 5 hour layover in Seattle on the way over, but they were made, and a self-catering flat booked for our stay by Ros. I scheduled my teaching year around the trip, we lined up housesitters, plant waterers, chicken tenders and kitty huggers.

All seemed to be going smoothly, even for the ultimate travel panic/grouch (me).

Monday evening, less than 24 hours before we were scheduled to drive to Portland to catch an early morning flight to Seattle, we went out for dinner to celebrate our anniversary. Over dinner I casually said, "we should see if we have a few Euros" (for a meal during our Frankfurt airport stop) "and, oh yeah, get out the passports."

This is where the Stupids woke up and had their shining moment in the sun. As I took out the passports, I made a joke about checking the expiration dates, and then .... I actually screamed: my passport had expired in 2010. Not last month, or a few months ago, but 2 full years ago.

When I screamed, my sweetheart rushed in to see what was wrong. When he saw the impossible date in black and white, he too collapsed into a chair, holding his head and moaning, "you can't gooooooo!!!!"

It now being well past our normal bedtime, neither of us was thinking very clearly. However, we reached for our computers, Googled, 'emergency passport renewal' and found out that

1 There really was such a thing, but that ...
2 We had to go a regional passport center to do that, and that fortuitously,
3 There was a regional passport center in Seattle at which we could ...
4 Make an appointment for Thursday morning by calling a 24 hour automatic number because...
5. We had this stupid 5 hour layover in Seattle that we had been complaining about for months, that now was looking really excellent, since ...
6. After checking times and distances, it seemed just possible that ...
7. I might be able to buy a ticket on an even earlier flight, go to Seattle on my own, thus getting an extra 1.5 hours to ...
8. Land in Seattle, collect my bags, sprint outside, hail a cab, and make it downtown in time for an early appointment, get a fast renewal, catch another cab back to the airport in time to ...
9. Check in for my flight on time to board at 12:45 for my 2:00 flight to Frankfurt
10. With Don.

There were a few unanswered questions. Such as,
A how long would it take to get the passport, once it got approved (if it got approved)? Was it even possible in less than 2.5 hours?
B If the worst happened and I could get a new passport, but it would take longer than 2.5 hours, could I get a seat on another flight, and if so, what in the hell would it cost?
C If I couldn't get another flight within a day or so, then how would I get home from Seattle, when we had left our car in Portland? Portland is 3 hours by car from Seattle, then another 3 hours from Portland to home.
D But the biggest question of all was, how could Don show up at the wedding without me?!

We had to try.

After a short, fairly sleepless Tuesday night, I taught all day Wednesday, packing, cleaning and getting the gardens, kitties and chickies ready. We left Bend late, at 8:30 that night and drove through pouring rain to Portland. After a few short hours of sleep, we rode the shuttle to the airport and the saga began.

I won't go into all the details, but I will just say that there are extremely nice and helpful people everywhere you go, that I just had some of the best service from a government agency, ever, and obviously, miracles do happen.

Results? Practically perfect, smooth, effortless travel and timely arrival in Scotland. We were met at the Edinburgh airport by the bride-to-be (photo below - think she was excited to see us? And she didn't even know about the passport). We quickly settled into our rental flat in Peebles, after stocking up on breakfast food at the local Sainsbury's (porridge oats, local farm eggs and streaky bacon), visiting the town butcher for meat pies and a Selkirk bannock. We had dinner at The Tontine Inn (established 1808) with the groom's parents and brothers from Yorkshire, and fell into bed at a normal hour.

The other photo shows me looking rather dazed but happy, enjoying that lovely new passport smell while waiting for the train back to the airport in Seattle. It took exactly one hour from when I walked through the door of the passport office to when I walked out with my passport clutched in my sweaty little hands. And I have high hopes that the Stupids will be absent for a good long while.

The mothers of my students all heard the story as I taught my last few lessons, that day we left. I'm quite sure their prayers, good wishes and positive thoughts were instrumental in getting us here with bells on. One of them even said, "May the Force be with you.". Was it ever 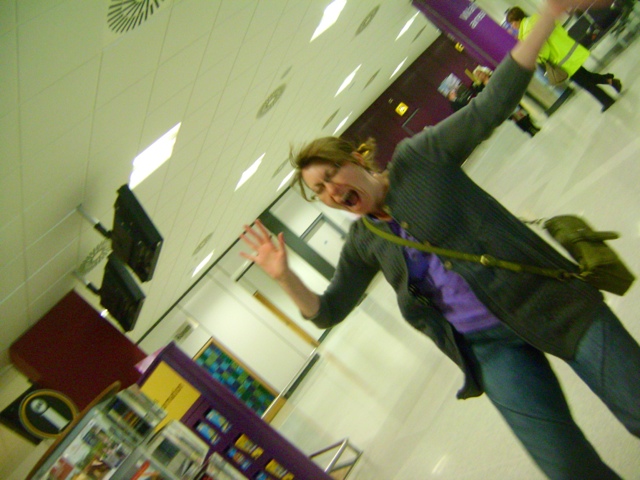 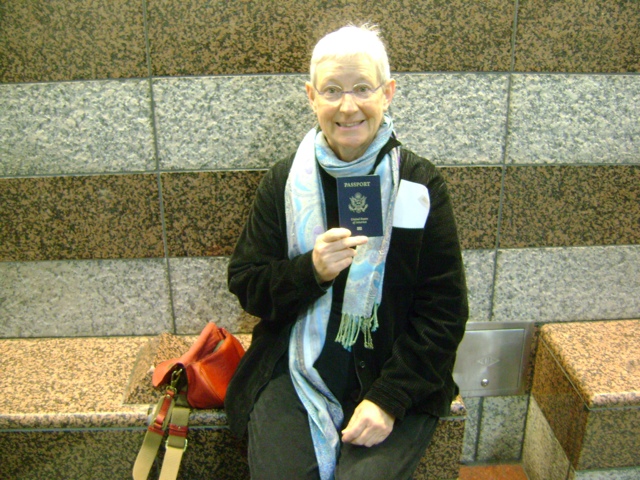 Email ThisBlogThis!Share to TwitterShare to FacebookShare to Pinterest
Labels: Scotland, the Stupids, travel