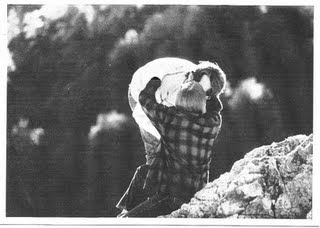 Here we are, caught smooching on one of our first BnB hikes together.

Here we are on the first Earth Day, April 22, 1970, at the Earth Fair in Eureka, California. Another stealth photo by a friend. 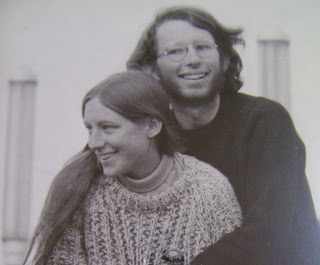 A year later, we married, rather reluctantly, to avert parental wrath at our 'sinful' living arrangements. We didn't particularly believe in marriage, but at the time felt it was worth it to make our lives less stressful. We knew we were going to be together forever, and didn't think it was necessary to have anyone else's permission or approval.
40 years later, we have both come around to a feeling of respect for marriage as an institution worthy of preserving and working hard at. I say that, while admitting that, if I were to get married today, I would have even fewer people present than we did in 1971. And that's saying something.

In retrospect, it seems like a nice hippie-type wedding. We had picked out a grassy meadow, complete with grazing sheep and huge oak trees, near the mouth of the Mattole River, on Cape Mendocino in northern California. 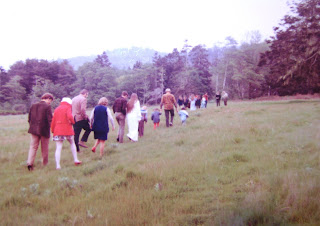 We asked a minister friend to do the job, and he showed up, unshaven and in casual clothes, in proper 'hippie minister' style. My parents and sister drove up from the San Francisco Bay Area. Don's family didn't come (I seem to remember his mum thought we were too young to be getting married) and the wedding guests numbered only 12, including the photographer and 3 small children. 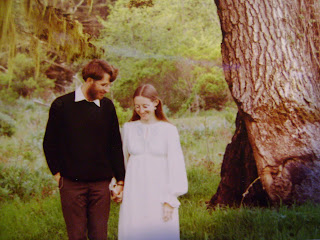 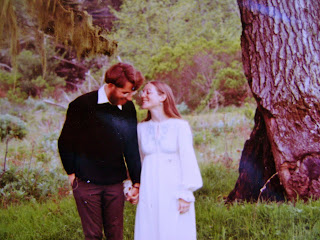 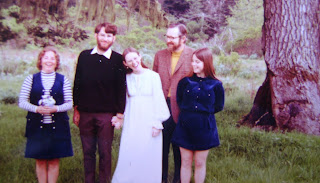 Our friend Mike helped lay out the wedding feast on the tailgate of his 1961 Ford Falcon station wagon: a sheet cake from my parents' bakery, sandwiches, Creamline Dairy milk in the gallon glass jugs, and a case of champagne, of which I think less than 1 bottle was consumed. We weren't much for alcohol, and most people drank the milk.
Neither one of us knew much about 'proper' weddings, but we knew there was something about feeding each other cake. 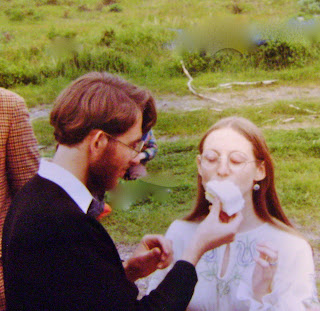 Wedding guests were few but special.
Russ and his fiancee, Nadeine 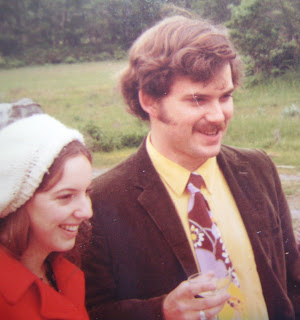 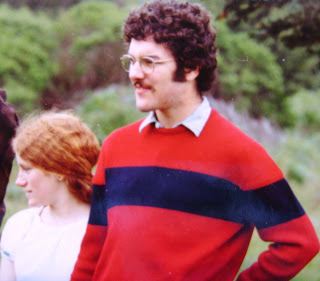 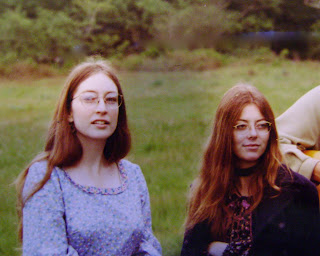 I imagine the whole affair cost less than $100, including the minister's fee, the food, my dress, which my mother sewed and I embroidered with flowers on hem and sleeves, and the gasoline for all of us to drive out there. Even with inflation, I doubt many people get married so inexpensively, or so simply. I'm not saying getting married in a sheep pasture, under an old oak tree, is for everybody, but it suited us both perfectly.

40 years later, we're still together, still sweethearts, wondering how the time could have passed so quickly and still hanging out under trees and holding hands. It has been hard work at times. I always cry at weddings now, knowing the heartbreak and troubles ahead for everyone -- it's the human condition. Maybe if any of us knew what was ahead in life, we wouldn't be so willing to gamble on such things as Love! Marriage! But then, we didn't know, and so we did. So far it's still working out.

Thanks, sweetheart. I love you.
Posted by Unknown at 10:14 AM

Email ThisBlogThis!Share to TwitterShare to FacebookShare to Pinterest
Labels: anniversary