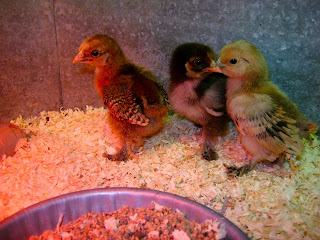 Chick fever. I would like to blame it on my friend Susan, who was 'forced' to get 2 new chicks last week when her new dog turned out to be a chicken killer,thus reducing her small flock to only two 3 year-old layers. I was already weakening, having walked less and less firmly by the brooder boxes full of peeping cuties each time I visited the feed store over the last few weeks. Enough chickens. I have enough chickens. Really.

But the fact is, I have chicken lust, unsatisfied by last year's initial plunge into chicken ranching. I can see right now that I will have to add April to my list of Danger Months for the year. During May and June I try to stay away from nurseries, with their alluring greenhouses full of annuals and perennials, calling, calling, calling to me: 'take us home. put us in your garden. mingle our colors on the deck. create a rainbow of containers. hurry, before it's too late. the season is short. you know you want to.' and so I succumb.

Now it seems I have to stay out of feed stores during late March and April. (But what if my girls need a bag of feed or some straw for their coop? No, just wait a while......)

OK, it's true. I have had my eye on various breeds to try, next time around, when these girls slow down on the laying. I don't imagine I will have the heart to do them in when their laying days are over, rather I plan to put them out to pasture, so to speak. But I will add a couple of new hens to the flock, probably next year, to keep the egg count up. We really love our fresh organic eggs.

So instead, I have managed, this past month, to walk by the peeping hordes of standard breed chicks, waiting for a good set of bantams! to be available. Two things have spurred me to action now .... well, along with the siren call of cuteness at the feed stores.

One -- my poor sole bantam, Babe, of the frizzled feathers, has become a ragged shadow of her former self over the winter. After all my research and care last year, I still underestimated the amount of space the girls would need, once they grew to full size. The run I had designed was just a bit snug, especially under cold, wet, wintry conditions and long hours of darkness. I also underestimated the power of 'pecking order' in a flock, and I have spent long hours, worrying and feeling sorry for Babe. She is the perfect peckee, different from the other hens in every way: smaller, different color, weird feathers, feathered feet .......

I have tried various things to mitigate the problem, but the fact is, she will always be at the bottom of the pecking order. Unless ......... she has some company in her smallness. So I decided to get her a pal, another bantam, with the idea that she would have someone to hang out with in the flock. Babe spends a lot of her time all by herself, a pariah, which saves her from constant pecking, of course, but I can see she is lonely.

Two, I have a new run, so there's a lot more room for all the girls to wander, peck and scratch. Room for a couple of new cuties to flit here and there and find safety from the big girls.

Thus the bantam chicks. Why three if I only want one pal for Babe? Other than chick lust, I am hoping for at least one hen amongst these little guys. Standard chicks are either sexed at the hatchery, or are sexable by color (in the case of sex-links), so when you buy chicks you are about 90-95% sure of getting all females. Last year I got 1 rooster out of 6 chicks -- bad luck, but not unheard-of. But bantams are too small to sex, I guess, so they come only 'straight run' from the hatchery. The chance of getting a hen is only 50/50, so I decided to up my odds by getting three.

These little peeps are already 2 weeks old -- getting a few feathers already on their wings -- but still tiny, compared to the newly-hatched standard chicks. I haven't named them yet, but can already see personalities developing. Again, I couldn't resist getting 3 different breeds, though this was more because these were what the feed store had, than choosing these exact kinds.

From left to right, we have a partridge cochin, a mottled cochin (I think -- the lady in the feed store was a bit vague), and a mille fleur belgian d-uccle (how's that for a mouthful). They should all be beautiful when they grow up, and I'm keeping my fingers crossed that I will get as many as 2 hens. Any roosters will have to be warranteed back to the feed store.

So the metal wash tub is back in the garage, the heat lamp suspended from the overhead ladder track, and the wee feeding and water dispensers are back in action. Peeping abounds. Cuteness rules. Aaaahhhhhhhhhh.
Posted by Unknown at 7:50 AM