I'm very sorry, fellow Bendites. It's probably all my fault. Yesterday, in the giddy hours of our second warm, sunny day in a row since November, I had the temerity to 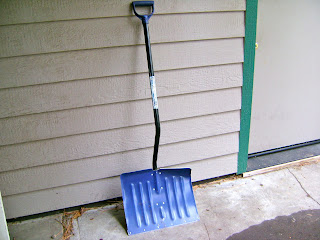 put both snow shovels away for the season 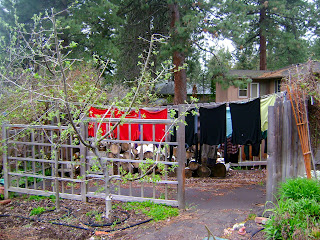 hang laundry on the clothesline (it was all my wooly garments too -- I was hoping for the last time until fall -- double my bad).

It's been a long, cold, wet spring. And still is. The plants don't really seem to mind, and the fact that everything is leafing out and blooming 2-3 weeks later than normal bodes well for our nascent fruit crop to survive unscathed by late spring frosts. Here are my beautiful pear trees in their full glory 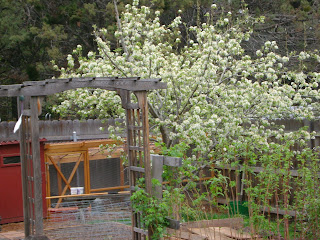 But even those of us who normally laugh at the weather whiners are dragging a bit this year. I had thought that, since the sweetheart and I spent part of yesterday putting together a new drip irrigation system for my new raised beds, the weather gods would be mollified. Rain often follows a good thorough soaking with ye olde sprinklers and hose. Probably it failed this time because today is PPP day.

What is PPP? It's the 36th annual Pole, Pedal, Paddle race, of course. This annual madness occurs each year around the third week in May, and in the week leading up to the race, the signs are everywhere around town: cars with canoes on top, cars with bikes on top, cars with kayaks, bikes and pods on top. People learning how to kayak on Mirror Pond, 3 days before the race. People renting skis and learning how to ski, 3 days before the race. This 'training' style is practiced by a good percentage of the 3000+ participants, many of whom, just once a year, arise from their couches and form teams with other couch potatoes, who jointly assemble rental skis, someone's rusty bike from the garage, a canoe and a grill (for the after party) and go mano a mano against other teams with names like 'Old Men in Skirts' .. 'Just Keeping Up With the Girls' (husbands) ... 'Shakey Buckets' ... 'The Geriatric and the Junior' .... 'Psycho Mega Hose Beast' .... and my favorite: 'Capitol Punishment' (a team of Republican and Democratic senators from the Oregon capitol, working in the best bipartisan tradition).

The interesting thing is that there is a whole other race, with competitors at the highest levels of athletic prowess. Through the years, Olympians past, present and future have come and raced, surprisingly often beaten by the locals -- among whom there are, admittedly, many former and past Olympians in various disciplines. The couch potatoes and the major dudes are all out there on the same course, though, thankfully, sorted into waves to avoid serious clashes of culture.

The race consists of 6 segments, and the top finishers complete it in well under 2 hours. The race begins on the groomed slopes of Mt. Bachelor ski area, 22 miles west of Bend, and finishes by the river, downtown.

1 Alpine skiing -- competitors must first sprint uphill, wearing helmets, boots and goggles, to grab and don their skis. After a mere 1.15 mile downhill run, the competitors switch to
2 Nordic skiing -- an 8 km course on groomed trails. Then there is a change of shoes and a hop onto the bikes for the
3 Cycling -- 21.7 mile, mostly downhill ride to downtown Bend. Off the bikes, another change of shoes and the
4 Run -- 5 miles, on roads, trails and gravel paths, finishing at the Deschutes River, where everyone hops off the bike and into their boat of choice for the
5 Paddle -- .8 km upstream, 1.2 downstream, then .4 back upstream to disembark and leap out for the final .5 km
6 Sprint.

After the race is over, the best part comes. Besides the sore muscles, I mean. And that is the After Parties. Traditionally, the less fit the team members, the bigger, louder and more beer-infused the after party and the grander the war stories. Believe me, they go on into the night. The serious athletes may party too, though I suspect many of them are already making plans for next year.

Judging by the thwock thwock sounds of helicopters over downtown outside my window right now, the first finishers -- the elite athletes and serious, serious soloists and pairs -- are close to the finish line. As for me, I have a heavy day planned of installing drip irrigation, taking down my laundry to dry inside, and transplanting things into the garden. And preparing to hear the sounds of partying until the wee hours tonight, spiced, undoubtedly, of tales of snow at the start line. It's always something.
Posted by Unknown at 11:05 AM