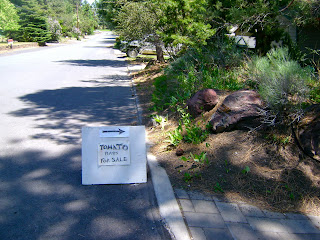 One would hope the fine postal workers delivering our mail each day to be a well-read, literate crew. However, the above words were uttered by the tall, unsmiling man at my front door last week: "I'm a postal driver and I seen yer sign about tomato plants. I brought my mother to get some......"

Every year I go a little bit crazy with tomatoes. Our short, unreliable growing season doesn't give much time for ripening the best-known, beloved gigantic slicers often referred to as 'beefsteak' tomatoes. Experienced tomato-growing Central Oregonians have evolved multiple strategies for dealing with the limitations of our beloved high desert climate. Some plant only under cover, in cold frames or greenhouses. Some plant tomatoes inside Wall O' Waters, and leave them on all season. Some plant in raised beds, against rock walls, or under wide house eaves. I've tried all of these methods.

One of my favorite strategies is simply to plants lots of tomatoes, of lots of varieties. Being obsessive, but also curious, I usually go overboard with tomatoes, ending up with anywhere from 20 to 30 different varieties. Hey, seed is cheap and I look on this as a kind of insurance. I grow about half 'safe' short-season varieties (55-65 days) and half risky but bigger and tastier long-season (for us) varieties (65-85 days). That way if we have an early hard frost, at least I will get something, and if we have a nice long, warm summer and Indian summer, I will also get a good harvest of bigger, longer-season slicers and pasters.

Normally I plant 6 seeds of each variety, aiming to plant 2 of each kind in my garden, and use the rest as frost insurance (in case the selected plants are wiped out by frost untimely during the hardening-off phase). After that I give the extras away to friends. For the past few years I have put a sign out front saying 'free tomato plants' and my neighbors have cleaned me out in no time. This year, in a more entrepreneurial spirit, I put an ad on craisglist for my extra tomato starts. I also put a sign out on the street in front of my house, to bring in walkers and drive-by neighbors. 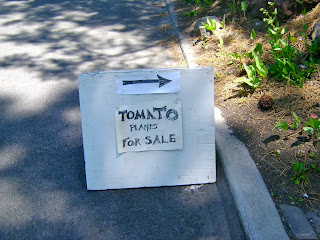 I was a bit miffed last year when a single neighbor or passerby took the entire lot of free plants off the front porch in one swoop, leaving nothing for anyone else. Whoever it was also took all the boxes and trays I had set out. We're talking more than 10 plants here, and I call that both selfish and greedy. So I thought I would make an attempt to keep out such riff raff and perhaps pay for my time and potting soil. 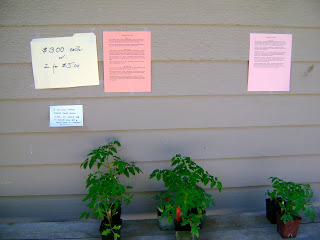 In the time-honored tradition of country farmstands, I put up a sign indicating prices, and a note to put the money in a box in case I wasn't home. In my experience, most people are pretty honest, and will not steal the cash at such operations. As it turned out, I was home when all of my customers came by, so I did the transactions in person.

Interesting people. I'm not sure what would prompt a person to go to all the trouble to track down my house to buy a few tomato starts, rather than stop at a local nursery. At this time of year, even the big box stores sport displays of tomato plants lined up next to the grills and lawn mowers. Strangely, only a couple of the people who came were actually interested in the fact that my varieties were heirlooms or short-season types, or knew anything about gardening at all. But many seemed merely to have shown up at the prospect of ....... what? The price? Most had no clue about even the most basic facts of tomato culture. For instance, that tomatoes come in two different growth habits: determinate and indeterminate..... or that it is important to look at the days to maturity in order to have any hopes of getting ripe fruit ..... or even that they come in sizes beyond 'cherry' and 'non-cherry'.

The postal guy's mother was so unsmiling and uncommunicative, not to mention seemingly ignorant of the most basic gardening knowledge, as to appear downright hostile. Maybe she didn't really want to grow tomatoes at all, but her son insisted. Another woman seemed to have some gardening experience, but demanded to see where I grew the starts, and even my whole vegetable gardening area. A couple of neighbors dropped by, and I gave them the plants for free -- it originally started as a neighborly offering, after all.

In the end, a friend of a friend took my last 7 plants on Friday, and amazingly, I ended up about $50 to the good. Pretty sweet, since I would have grown all those plants anyway. It certainly paid for my potting soil, water, and the electricity to power the soil heating cable and grow lights. Hmm. Next year, maybe I'll grow a few more, put the ad up sooner, and/or offer other vegs. I hope my 'kids' all grow well for the folks that bought them. Maybe I should have insisted on a written disclaimer..........
Posted by Unknown at 7:49 AM

Email ThisBlogThis!Share to TwitterShare to FacebookShare to Pinterest
Labels: tomatoes