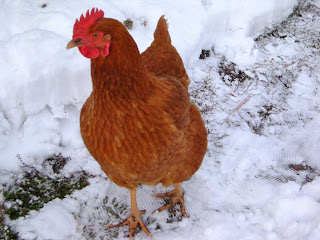 It's my own fault. I felt sorry for the poor chickens last month, stuck in their tiny little house and run while the snow fell and the days were short and dark. Their run was covered by opaque plastic on the top and all but one side, so they didn't even have a view of the rest of the world. I had the best of intentions. I also had extra motivation in the fact that poor little Babe, my only bantam, was getting pecked unmercifully. They were bored, they were cranky, they were a bit crowded. And when chickens are bored, cranky and crowded, they start picking on the lowest hen in the pecking order. I didn't realize the immutability of 'pecking order' until I got chickens. I actually isolated Babe for a while, but it was tough in mid-winter where I had no place to put her outside the henhouse.
Here she is, still incredibly cute, but bald as an egg and pretty scraggly-looking all the way around. 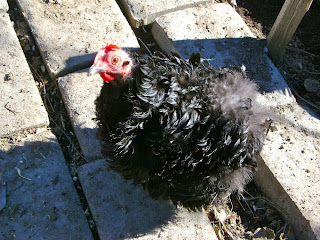 So it all started out innocently enough. First I created a little mini-yard out of the portable dog pen I used last year for the chicky day-spa. 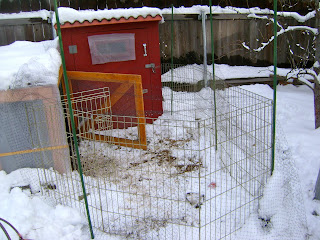 Then I thought, that's not much room. Maybe they'd like to get out into the garden. I shoveled the snow off the paver path to the chicken coop 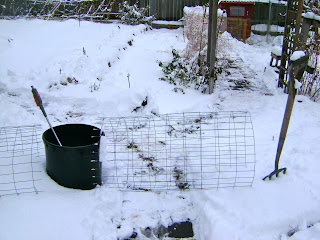 and then up to the vegetable garden space next to the house. 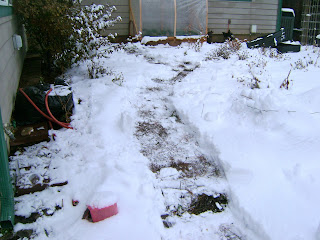 There's snow everywhere except under the house eaves -- they will be safe and protected there and they can scratch around in the dry dirt. Uh huh. I was right, they loved being out in the garden. They scratched around in the few bare places and had a fine time. They hated the snow and stayed inbounds. 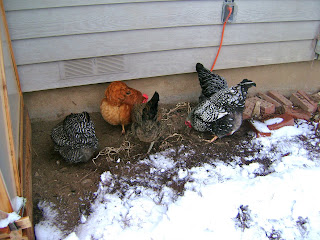 Until the snow started to melt. More and more of the garden was revealed, and opened to the increasing depredations of: Destructo Chickens! Scratching around the empty vegetable beds was one thing. But as the warm days revealed a few perennials, my dianthus became their new favorite. Before they completely demolished them, I managed to cover them with burlap. 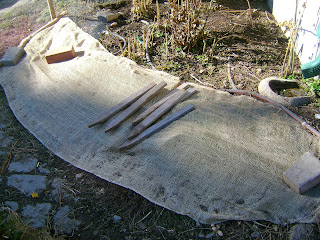 But eventually all the snow melted and now how was I going to keep them out of the garden?

Yet another visit, in an ongoing chicken-related series of visits to the hardware store, yielded a 50 foot roll of 48" fencing, which stretched out to corral the girls into the lower portion of the vegetable garden. This holds the chicken house and run, a couple of small fruit trees and not much else. It is completely shaded by the boundary fence in winter, and nothing much grows there in the summer. They can't hurt anything, because there's nothing there. 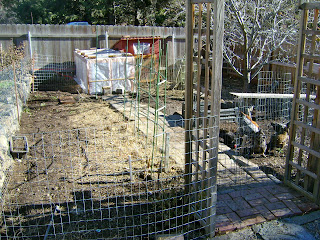 Of course, since there's nothing there, they get tired of scratching in the bare mud and cast their beady little chicken eyes longingly back at the vegetable garden and perennial beds where they were wont to play in days of yore, ie last month. Here they are inside the new 'yard', squabbling over some grass I have just dug up in another part of the yard and dropped in. 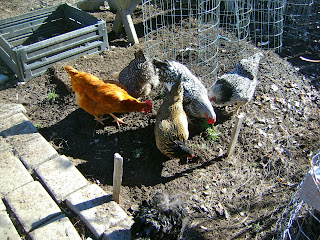 That worked well. For about three days. Then one of the chickens managed to sneak through a hole in the raspberry bushes and out they all came, joyfully exploring (destroying) new floral horizons.

Up went more fencing. That was this morning. It worked for about an hour. Then I found Hawkeye, the most adventurous hen, out in the garden again. She had discovered she had wings. I picked her up and put her back in the pen. Next two different hens had flown the coop (meanwhile Hawkeye had forgotten how, and now it's obvious I'm going to have to think of something else. Once the days get a bit longer, we are planning to re-locate the henhouse and build a secure and larger yard. Meanwhile, what to do.....

Interestingly to me, newbie chicken rancher that I am, the biggest draw in the garden is not the greening weeds or even the tasty perennial plants. It's the Dust Bath !!!!