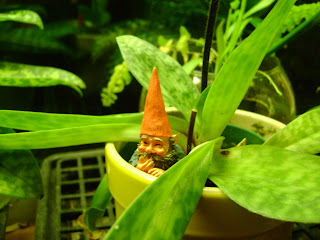 Indoor plants need extra help, especially mine -- as I related in my last post. Outdoors during the growing season, we have the odd bit of garden 'art', and various animal-type creatures (cats, chickens, bees and other insects) moving about to re-arrange and harmonize the garden chi. But the houseplant scene is pretty static, even occasionally desperate, during the cold winter months. Thus I try to incorporate a few smaller assistants for plants on windowsill and sunporch.

Gnomes (above) are obviously quite well-known as helpers. This one seems to be saying, "shhhh! don't disturb the plants!". He is encouraging my only currently blooming ladyslipper orchid, and obviously having some success. In addition, I have a whole extended family of these wee ones, lurking about the place. It being the off season, they are taking a well-earned break, standing around in front of the pumpkins, chatting and telling gnome jokes. 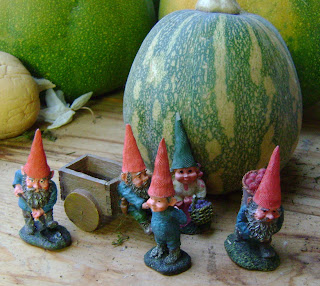 The grand-daddy gnome, Hamish, looks out from the greenhouse window, keeping an eye on the weather. He is actually an authentic Scottish gnome (made in China), so he is perfectly suited to weather-watching. They know weather in Scotland. 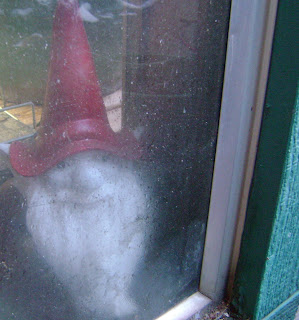 
Standing by, also off duty for the winter, is my cast-iron flying cat. I bring her in for special-needs situations. 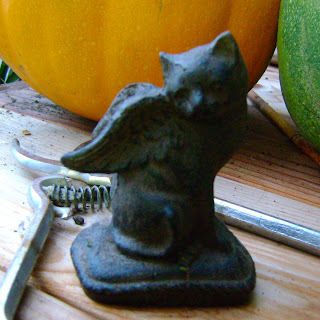 Here is the plastic frog, standing in for the real Mr. Frog, who lives in the wall but is too shy to come out for visual admiration.

This little bird -- I think he's a junco -- is off duty, hanging out with the orchids and waiting to go back out to the miniature tree shelf on the back deck. I love juncos. 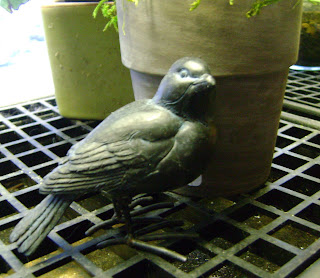 The Flying Pig is new, and has never really been tested in action. I think he has great potential. He is currently overseeing snow shoveling activities outside. 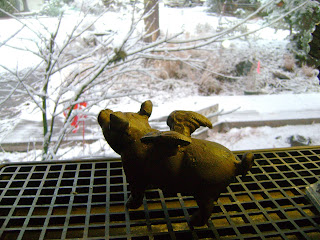 For the tropical set, Gorilla reminds me to keep water in the pitcher plant bowl. 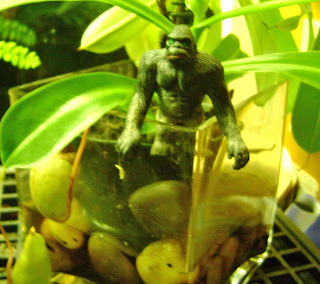 Hanging above the orchid section is a scary Green Man figure, reproduced from the ceiling of Roslyn Chapel. 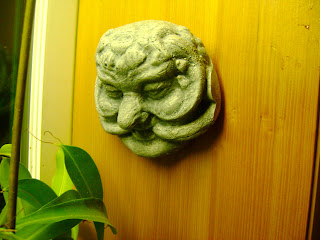 Back in my office, my own personal windowsill gnome quietly encourages my garden-planning efforts. 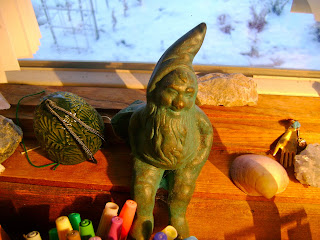 It is good to know I have lots of company in the garden.
Posted by Unknown at 7:45 AM