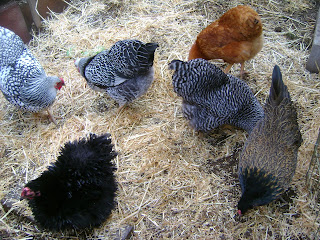 Before I got chickens of my own, I had never stopped to think about how many, many words, common expressions, figures of speech and sayings we have in the English language, related to chickens. One day last summer, I started a casual list of such things, thinking, well, I'll bet I'll come up with 20, maybe 25. I kept the list on a small pad on my desk and whenever I thought of another expression, I added it to it. To my amazement, the list grew to ........... well, what do YOU think, fair readers? Take a guess, right now. Make your own list, if you're curious. In the meantime, let me begin sharing my list with you. Hint: it's going to take more than one post. Ready?

In the order they occurred to me, here they are:

1. Pecking order.
Everyone has heard of pecking order, and in fact, I have used this expression on many occasions myself, referring to everything BUT chickens, up until last spring, when I first got my girlies and started seeing it in action. I was shocked to find out that a) they really PECKED and that b) there was no arguing or fooling around or 'teaching' them not to be 'mean' to the peckee. Pecking order is immutable and has to be dealt with. I expect other birds also have pecking order, but I am quite sure this expression came from humans' longtime association with domestic fowl.

2. "Chicken!!"
As in, 'coward!'. To my surprise, I haven't found chickens to be particularly cowardly. Instead, they seem sensibly cautious about trying new things, including going into a new space, eating an unfamiliar food, and seeing large animals (and strange humans) coming towards them. They are prey animals, and it makes sense to duck and cover, retreat, squawk in alarm (ooh! ooh! there's another one for my list!) when facing potential threats.

4. "I ain't got scratch"
Similar to 'chicken feed' -- "I have no money". After observing my girls literally scratching away, often over ground they have already scratched away at for the last 6 hours, or in the case of their covered run, the last 9 months!, it is obvious that scratching is life to a chicken! To not have even one crummy seed or bit of food is poverty indeed.

5. 'Chickenshit'
Similar to #2, calling someone a chickenshit is an even ruder way of saying they are cowardly.

6. 'Bantam weight'
As in boxing or wrestling. After watching my tiny bantam hen bobbing and hopping around the standard size hens, I have a much better feel for this description of the smaller fighters. Ya gotta be plucky if you're that small. Sometimes you get beaten, but you have to get right back up and rejoin the flock.

7. "feeling a bit peckish"
Another reference to pecking. I first heard this expression in English tv and movies, probably initially on Monty Python. It tickled me no end, even as a girl, because it seemed such a clever, urbane, cool, understated English way to say, "I'm hungry". 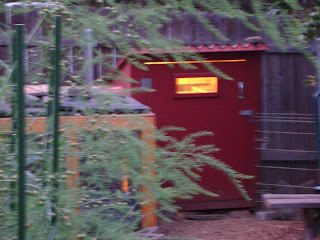 8. 'getting up with the chickens'
Well, yes. Even without a rooster, the girls are up early and they are NOT very quiet. As soon as the sky lightens in the pre-dawn, they are talking, scratching around in their house, and soon, bawwwkkking away. This winter, they have a light on a timer in the henhouse, which goes on at around 5:30. This time of year, that is almost 2 hours before it gets light outside, but there they are out in the back yard, demanding treats! playtime!

9. 'something to crow about'
This expression implies that roosters crow for joy, which I don't think is exactly the case. But still, that crowing is a boisterous, exuberant sound and anyone watching a rooster strut around the yard, crowing, feels certain something important is being announced.

10. 'ruler of the roost'
Another rooster-related expression. (I wonder how many refer to roosters, vs how many that refer to hens. I'll count.) Another assumption, that the rooster is king. I haven't had the pleasure of living with a rooster, since they are forbidden in the city limits. My chick that turned out to be a guy had to be warrantied back to the feed store. However, from what I have seen and heard, roosters seem to consider themselves the rulers.

OK, that's the first installment. There are lots more chicken words to come. Stay tuned.
Posted by Unknown at 11:37 AM