A study in contrasts

In a frenetic but obviously cosmically-aligned concantenation of events, I spent the first part of last weekend in periods of contrasting elements, arranged side-by-side. On Friday I presented a program for our local independent music teachers' group on 'internet resources for music teachers' which went as well as could be expected. Of course there was a technical glitch just before it started, which was resolved with a bit of sweat and desperate quick-thinking. The second technical glitch occurred in the middle of the talk, and went unsolved.

I am far from an expert on all things digital, cyber and electronic, but I had a good time putting a lot of information together and sharing it with my friends and colleagues. So, the first contrast was the information itself (high-tech) presented to a bunch of teachers of acoustic instruments, mostly piano (decidedly low-tech, even we could say, gravity-powered).

Then I threw some clothes into a suitcase and headed north for a music technology workshop, some 3+ hours away by car. My guide was Grace, my birthday GPS smartypants phone, decidedly high-tech 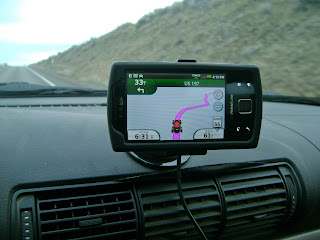 Poor Grace. Although I had put in my destination point (Cascade Locks, Oregon, on the Columbia River) there were 2 possible routes, and she chose the most obvious one, which goes over 2 mountain passes, while I planned to go the less obvious way, up and across the high desert plateaus to avoid traffic and potential snowy roads. I'm sure there's a way to specify a particular route but I don't know what it is. Thus Grace was quite determined to get me to the other road, once I got to the junction point.

One of the things I like about Grace is that she doesn't really 'argue' at times like this. But she is VERY determined and persistent in the face of what she is undoubtedly thinking is sheer human idiocy. Once I turned off onto my chosen route north, she continued for at least 20 minutes to find roads that would get me over to her chosen route. I tried to reassure her that I knew what I was doing, I had been this way before, I knew the territory (I have switched her voice over to 'Australian English' so of course I know the area better), but she was having none of it.

It was a relief to get beyond the last possible turnoff and get her resettled into MY route. Which, to give her credit, she did without a single complaint. After that I attempted without success to engage her in conversation to help while away the 2 hours of driving that followed. I think the next generation of GPS's should include a social interaction program.

Alas, when I reached Cascade Locks, I realized I had accidentally programmed in the wrong address so that Grace took me first to the local school (high tech failure due to low-tech human error), then a rather seedy motel with a name similar to the correct one (human error again), and finally, to my nice clean Best Western, which I spotted with my own low-tech human eyes, down the street from the parking lot.

We were running a bit late now, it was getting dark, and I still had to check in, eat dinner and get to my workshop by 6:30. Grace couldn't help me navigate to this, since the workshop was being held at a teaching center in the middle of the woods, and she really didn't know where it was. I had to follow good old-fashioned printed directions (low-tech) snail-mailed to me (low tech) by the instructor, by the fading light of a short mid-February day. First I had to cross this cool bridge (over the mighty Columbia River), right next to my motel: 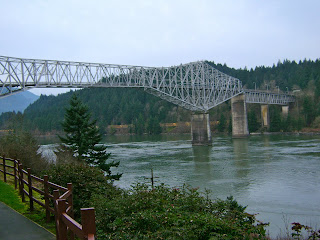 This is the Bridge of the Gods, named after an older natural stone bridge (lowest of natural low tech) from 'Indian Legend', long since washed away (like the Indians.....). We made it, Grace and I, and the evening session of the workshop, an introduction to Sibelius, the coolest music-notation software ever, was wonderful. Very high-tech. 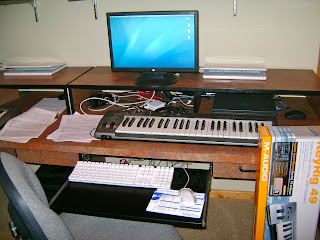 The setting, just a few hundred yards above Bear Creek outside Carson, Washington, not so much 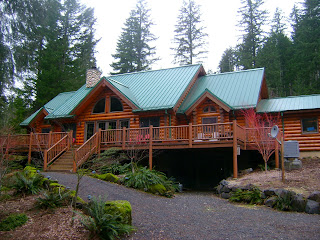 Finally, the drive home Saturday afternoon. Back to low-tech, I crossed the bridge for the final time, 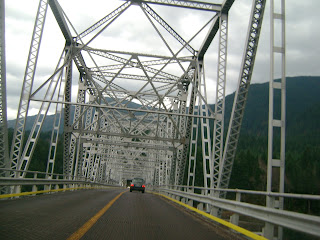 paying my toll of $1.00 to the friendliest tollbooth person I've ever met. When I had first crossed the bridge, she was so friendly and relaxed that I made bold to ask her, 'so, why IS it called Bridge of the Gods?' and she smiled, leaned out the tollboth window and told me all about it. 'Have a nice evening' was her parting comment.

Cascade Locks is a small place, and everyone I met there was super friendly. Then, before I headed for home, I had to check out the mural painted on the bridge support on the Oregon side: 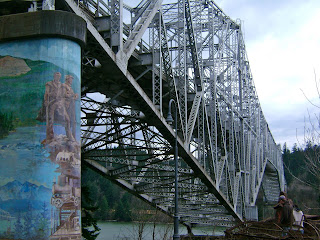 It goes from left to right in chronological order, and I liked this side because it shows, from the top down, all the original inhabitants of the area: eagle, coyote, bear, mountain lion and (look closely) sasquatch. :) 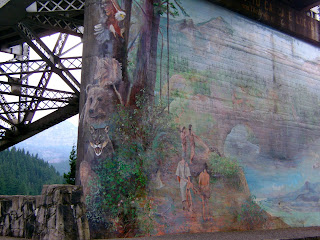 Here's the main body of the mural. Not your average bridge support. 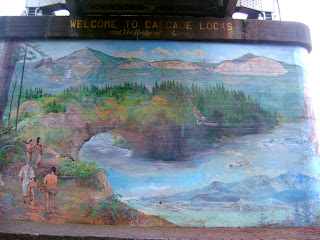 Here's a photo of the mountains in the background of the mural, just beyond the bridge. Apparently the rockslide that formed the original rock bridge calved off from these mountains. 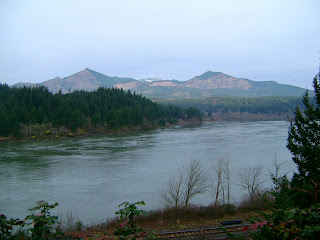 The Columbia Gorge is an incredible place, and I am sorry not to have photos of the more spectacular portions. The most famous sections, with waterfalls and towering basalt walls overhanging the road, are west of here. The day was cloudy, and I speeded east with the aid of a powerful tailwind, with the storm gathering behind me.
i 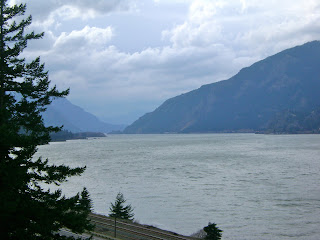 Once out of the gorge, the road rises to a high plateau and for miles and miles, I drove by winter-greening hills of wheat, flaxseed and fruit orchards. 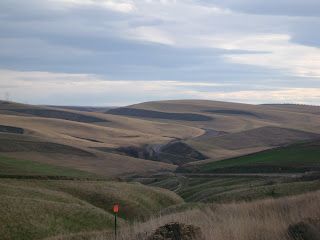 After that, I re-entered my familiar high desert, still up high. To the west, over the Cascades, the clouds continued to roll in, 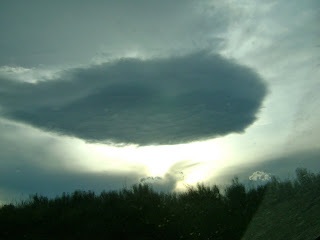 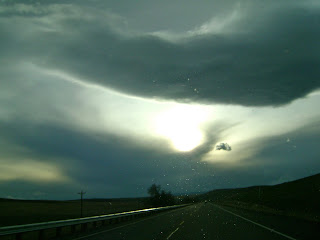 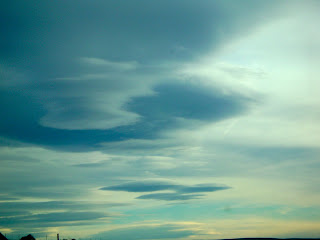 getting closer and closer, until eventually the mountains themselves were engulfed. Here you can just see Mt. Hood, cloud banners streaming by, about to disappear. 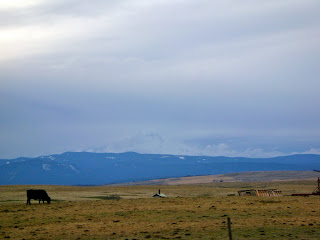 At last, the road heads back down towards home ground, below 4000 ft of elevation. It's a long hill! 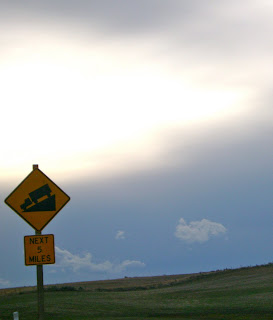 I arrived just after dark, as the storm winds hit Bend. Sunday was more low tech. Stay tuned. The story ain't over.
Posted by Unknown at 9:48 AM