Signs of the Season -- waxing philosophical 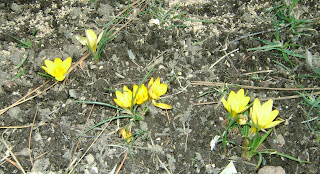 Since becoming a chicken rancher last spring, I have started observing seasonal cycles in greater detail than ever before in my life. Growing up in the San Francisco Bay Area of California, in a beautifully mild Mediterranean climate, I pretty much took the seasons, such as they were, for granted as a backdrop for kid activities.

When I began gardening in my early 20's, I was living in the rainy, foggy, perpetually damp redwood belt much farther north. My main focus was keeping the banana slugs out of the garden patch and coaxing reluctant tomatoes to bloom in the overcast summer months (definition of summer: fog instead of rain). I looked at the morning fog each 'summer' day and assessed the possibility of its melting off. It rarely did, but I did begin keeping an eye on the weather in a way I never had before.

Fast forward to my first garden in Bend a few years later. Suddenly there was snow in the winter and plenty of sunshine in the summer -- with frost possible any day, including summer. I became expert at checking the outside temperature before retiring to bed. My rule was, if it was 55 degrees or lower at 10:00 pm, with a clear sky, I covered things. Gradually I learned freezing was unlikely unless it was 45 degrees or lower. But still -- once those tender babies were in and growing well, I watched the weather like a hawk. And I acquired a good understanding of the word 'microclimates' as I learned the warm and cold spots of my south-facing, sloping yard.

In my 30's I became a serious student of astrology, and my knowledge of seasonal energies and plant growth gave me a quick and powerful grasp of the principles of the turning of the seasons from a more cosmic perspective. The symbolism of the various signs, planets, angles, and transits made perfect sense to me on a deep level. I reached out to the stars and looked at the night sky with new eyes.

As I turned to a more conscious co-creative gardening partnership with nature in my 40's, my perception of the seasonal energies deepened further. My 50's were an inward time in many ways, and a decade when I both integrated all that came before, and let go of a lot that was no longer useful, in my personal life and in my garden.

And then came chickens!

Suddenly 'daylength' meant a lot more than, "wow, cool, it's the Winter Solstice, the days will be getting longer from now on". Now the shortening days of late summer meant I needed to decide if I was going to install lights so my chickies wouldn't molt and stop laying in the short days of winter. Now I understood why ancient Celts celebrated the early February holy day of Imbolc (which morphed into the Christian Candlemas and the modern joke-holiday of Groundhog Day), with its 10 hours of daylight in early February, as a time when 'the back of old man winter is broken'. Plants, if protected behind glass or cold frame plastic, resume growth after a winter of stasis. And chickens, within a week of our reaching that magical number 10, began laying more regularly. Even with the lights in their henhouse, set at 13 hours of light, the girls had slowed down over the winter.

Back to plant world, see those cute little yellow crocus up at the top of the page? They are always the first to bloom in my garden, usually by mid-February or a little sooner. With our crazy out-of-sequence winter --- early fall snow, cold snowy November and December, 6 week balmy spell in January and early February, followed by two huge snow dumps and a third spell of temperatures hovering around 0 degrees F, this year they didn't bloom until early March (when the photo was taken). A few days later I took this photo: 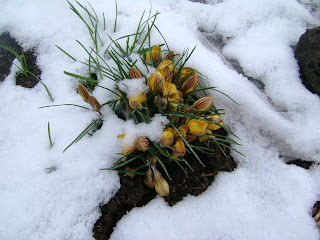 Still, the clearest harbinger of equinoctial energies occurs every March in my kitchen. On March 18, it looks like this: 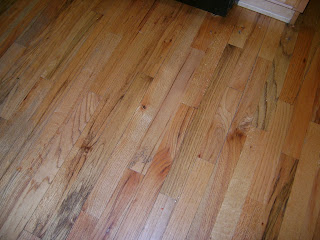 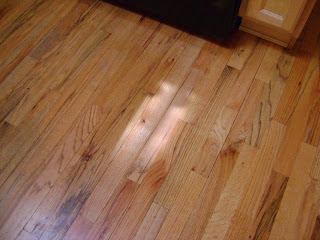 Overhead is the cause: 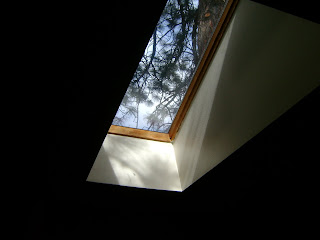 Due to the serendipitous placement of this skylight, just over the peak of the roof on the north side, we get a beam of light on the kitchen floor beneath it, 2 days before the spring equinox. Being close to 45 degrees north latitude, the sun reaches just high enough on that day each year to give us a taste of living inside a prehistoric stone circle. Floorhenge. The beam of light reappears near the fall equinox, and then disappears for the winter.

It's a pretty magical planet we live on, and it's good to have these reminders throughout the turning of the wheel of the seasons.
Posted by Unknown at 7:28 PM