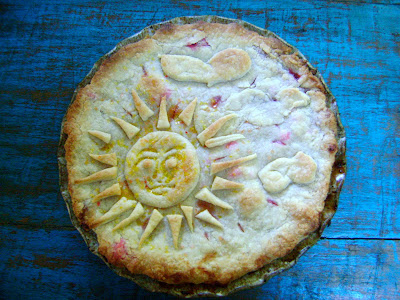 Once July rolls around, three things happen around here in quick succession.

1. Tour de France (first in the heart of my sweetheart). He dresses to match the flag 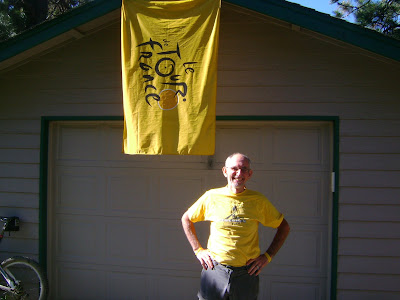 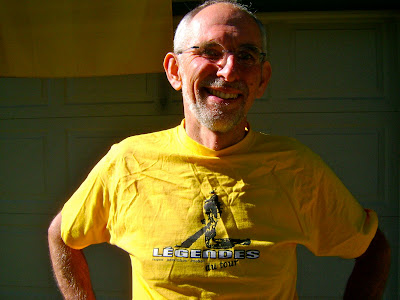 His shirt reads: 'Legendes du Tour' ......... a bit of tongue-in-cheek for him, as, at age 59+ (racing age 60), he is usually the longest-racing participant in state mountain bike races. The announcers have recently commented, as he crosses the finish line, "and here is one of the legends of Oregon racing......". I guess the difference between being a 'legend' and being a pretty good but not spectacular amateur racer is continuing to show up. 'Last man standing' might eventually apply here.

2. 4th of July burger bash at our friends'/partners' house, this year billed as 'Faceburger'. Pie Man Don makes another yummy cherry pie, and my crust decorating efforts this year resulted in a cheery scene of Mr. Sun, with a few clouds added to disguise, er, flaws in the crust. We are not Betty Crocker. The pies are fabulous, the crust flaky and good, but we're still working on crustal neatness.

3. And, starting well before July actually begins, the Bend Piano Monster Concert, 2010 Edition. Here I am, showing off our t-shirt, lime green in honor of one of our student participants. After playing in the concert last year, she reportedly wore her Monster Concert t-shirt to school every Tuesday, all school year long (presumably the day of her weekly piano lesson?). She told me her favorite color was lime green, so Rae Ann, this year's color is for YOU! 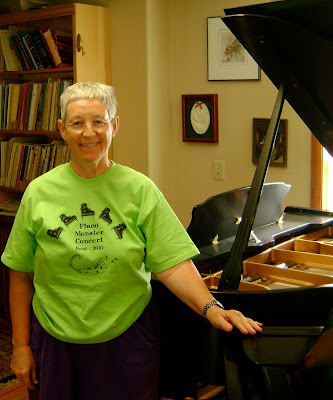 The Monster Concert consumes almost my entire brain mass, not to mention hours of the day, from mid-June to mid-July, and this year is no exception. I have so far managed to find 10 minutes each day to water my poor garden and take the chickens their early morning treat, but other than that the garden is in limbo mode. Somehow I forget how my time disappeared after the first heady days after school (and piano lessons) were ended last year, and this year was the same.

Spring was so long and so cold and rainy that I eventually had to choose between planting my exploding-out-of-their-pots tomato starts and having them freeze, and not getting them in until the middle of July. So they froze..... but survived with minor damage. 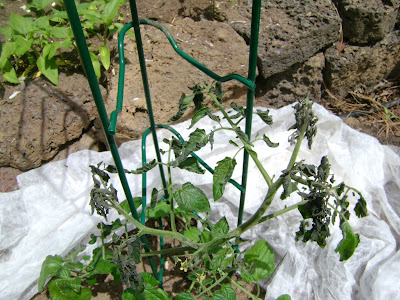 In typical Bend style, we saw frost on the roof of the house on Sunday, July 4, and three days later temperatures had hit the 90's. The poor plants don't know what hit 'em.

Here are annuals from the nursery, patiently (or not) waiting for me to have time to pop them into containers for summer. Once again, it's going to be a bit late. This is what happens to Monster Concert organizers who don't hit the ground running after the last piano lesson. 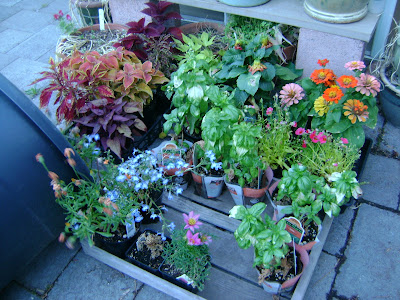 I left a shade covering over this same flat just one night, and this little guy snuck in a wee home for himself on one of the coleus starts 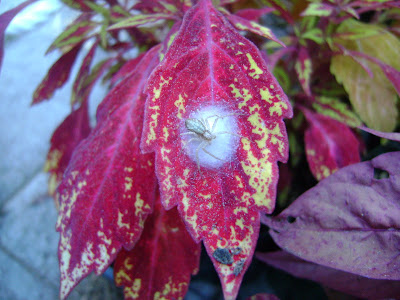 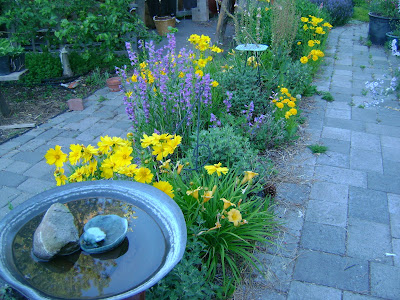 which bloom beautifully despite neglect.

And here's something that always seems weird to me: peas in July 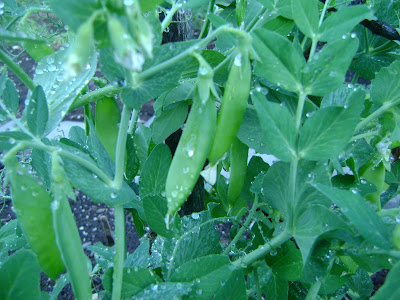 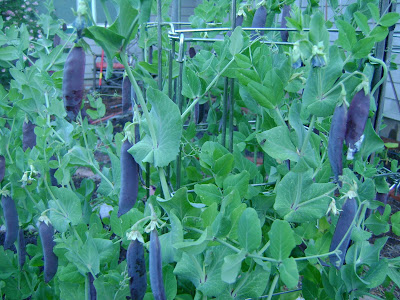 but that's when we always have them. These snow peas were planted in mid-April, and started blooming June 25 -- a bit later than normal because of the delayed summer, but not by much. The purple-podded ones are a centuries-old shelling variety, which I 'planted' from volunteer sprouting seeds, also back in April.
And here is climbing rose 'Claire Matin' which is blooming almost a month late, as are all my roses in this wacky year. 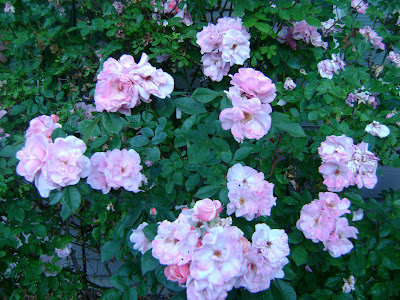