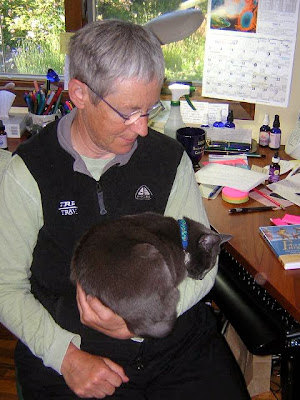 It's always best not to judge by appearances. Last week my beloved kitty (aka Small Portable Cat), Alix, single-handed-- er, single-catedly attacked and chased out of the yard a large dog (a bloodhound!) that was running around the outside of the chicken run, scaring the heck out of the poor chickens.

I was inside the house, doing something at my desk by the window. Hearing a sudden ruckus out by the chicken coop, I glanced out and saw the dog, barking and jumping around like a huge dork, causing all kinds of squawking and alarm among the chickens. I ran outside, still in my jammies and slippers, and grabbed the first 'weapon' I could find: a shovel. When I got to the coop, I could see Alix coming out from behind the run, fur standing on end, hissing at the intruder.

First I tried the "here doggy, nice doggy" ploy, hoping to entice the dog away without my getting bitten in the process, but it only distracted the dog for a minute -- then it went right back to barking at the chickens. But Alix the Fierce was not having any of it. She puffed up even bigger and advanced on the dog, which was completely oblivious to its fate. Suddenly, Alix jumped on the dog's head, hissing and biting and scratching -- much to the dog's surprise. The dog yelped, tried to back away, then fled for the exit -- with Alix the Hun in hot pursuit. Our big black cat, Rupert, who normally guards and protects us from the depredations of such villains as The Evil White Cat Across the Street, was just arriving along the dog's flight path, and although he puffed up too, he didn't join in the chase. The dog rushed out the carport and ran for dear life. The last I saw of it, it was halfway up the block above us, running as fast as its legs could carry it, howling 'arooo arooo arooo'. Alix watched it go, presumably in satisfaction for a job well done, while I nearly fell on the ground, laughing. 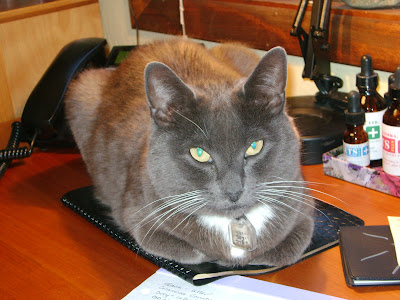