And now back to our regularly scheduled summer programming 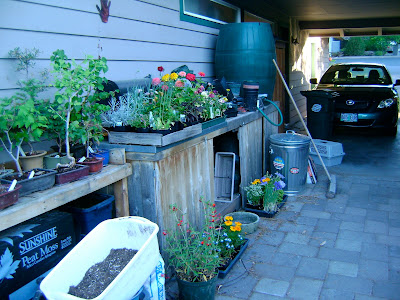 The piano frenzy is over. July is half gone. What's a neglected garden to do with itself?

Water, water and more water. The temps have been in the high 80's and low 90's for a while now, after the longest, wettest, coldest spring I can remember in decades. We essentially went from winter to summer, with no spring to speak of. I didn't water some parts of my garden until late June, which would normally be a death sentence for plants in our dry climate. But this year it just kept raining and raining forever. Many Bendites were heard bemoaning the fact that they might as well be living in the (green, wet) Willamette Valley.

However, even though many years we don't get summer until July, once it comes it stays and stays. Day after day, week after week, month after month of clear, warm (usually not too hot) sunshine, perfect for bicycling, gardening, and one of my favorites: Home Improvement Days.

Since my sweetheart and I work completely different days and hours, we have managed to set aside only one day that is sacred to Married Togetherness, and that day is normally Thursday. In summer it's a bit whackier, but we usually manage. Often Thursday becomes Home Improvement Day. Before our garbage & recycling company offered curbside yard waste pickup (three cheers for Bruce and Betty) our HID's often revolved around festive yet romantic runs to the landfill, using a friend's borrowed truck. Festive because, well, going to the dump has always been a sort of secret pleasure for me, ever since childhood.

In my earliest dump memories, Mom would load us kids up in our '46 Ford pickup and off we would go to the dump, which was, in those pre-environmental-awareness days, located in the salt marshes of San Francisco Bay. It was a scary yet enticing place to a small kid: both bleak, with giant windrows of burning garbage, and rich with the smells of rotting garbage, marsh grasses, and the cries of the wheeling sea gulls. It was smoky --ha! Imagine open burning in a modern landfill! We were absolutely NOT allowed out of the truck....... but more than once we sneaked out the passenger side door while Mom was occupied with emptying the truck bed. It was probably truly a dangerous place, but we couldn't resist a quick scan of the ground next to the truck before scurrying back in to Mom's yells. Once I found a tiny plastic doll which I kept for years.

The festivities around here this week include manly deeds of repair and womanly addition of new livestock to the urban farmyard.
First up was the all-important preparation for summer lounging. Don ordered a repair kit for our LaFuma chairs and restrung them. Ya gotta have a lounge chairs in a proper garden! 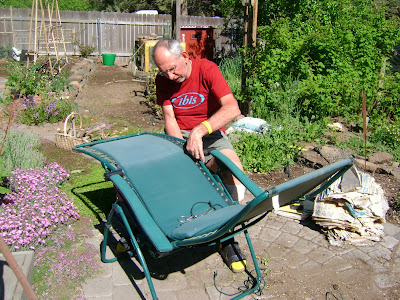 Then he changed the tire on my faithful garden cart, which had suffered a serious breakdown 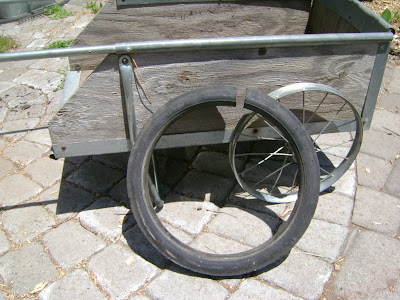 Living with a bike mechanic has its advantages. And dudes, check it out -- the new tire is a whitewall! 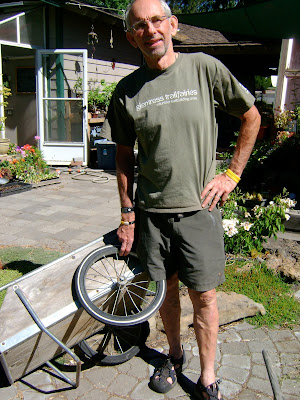 Perhaps this would be a good time to put in a plug for Garden Way carts? My sweetheart, sensing early on in our marriage that this gardening insanity probably wasn't going to go away, bought and assembled this cart from a kit for me back in, oh, 1972 or so. It came with all the hardware -- all he had to do was buy and cut the wood and put it together. I don't remember the cost, but it was damned cheap, and the thing has lasted and lasted, outside in all weather, for all these decades. The fact that, 38 years later, one of the tires broke, does not upset me. The other tire, not pictured, has had a severe wobble since our friend Rod borrowed it to move bricks, about 30 years ago, but even my ace bicycle mechanic husband can't true it. Still, it works.

Meanwhile, I assembled a worm bin. It's my second time on this, and I confess that, now that I have the girls I probably don't need one anymore. But I had ordered the worms 6 months or so ago, from a local worm rancher and couldn't resist the chance to go out to their place, admire their giant worm bins, and pick up my new livestock.

First, an old storage container with a weather-wrecked lid: 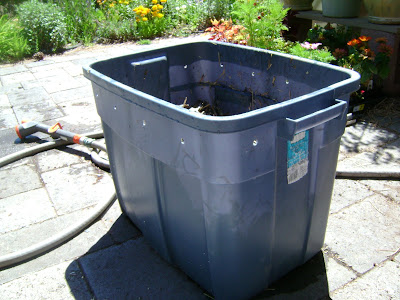 Next, bedding for the kids: shredded newspaper, old dead potting soil and a few handfuls of straw 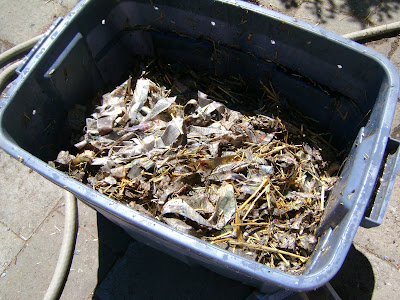 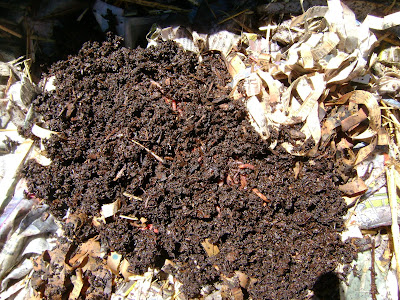 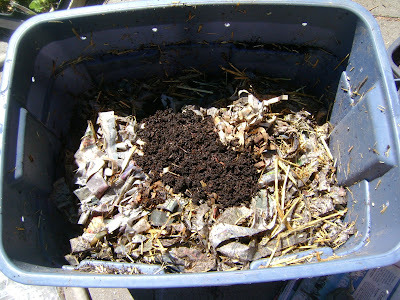 Cover with a nice newspaper blanket 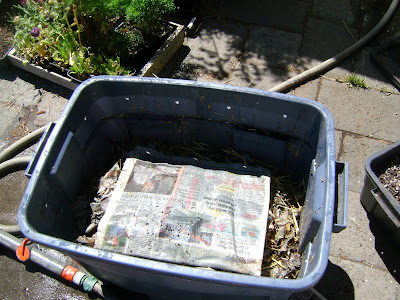 Put on the lid 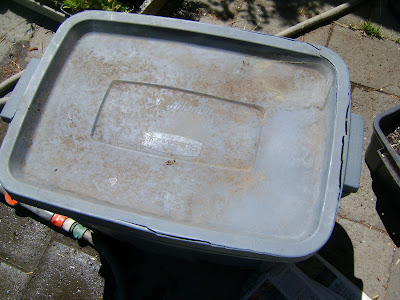 And under the eave of the front porch they go. Surely it's good feng shui to have earthworms next to the front door?! 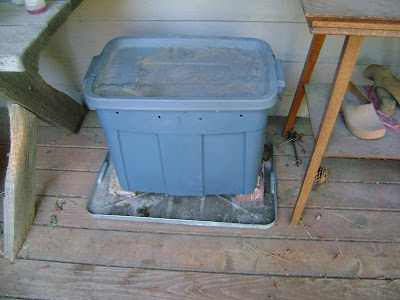