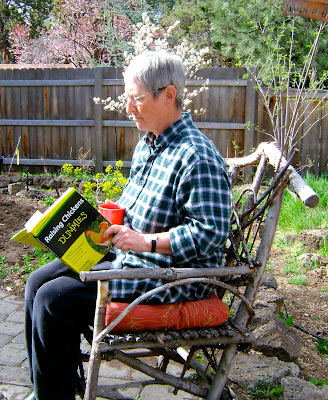 Did I mention chickens? After 35+ years of pent-up chicken lust, I finally have chickens. Almost since the beginning of my gardening life, almost 40 years now, I've wanted a small flock of hens to complete the picture. To be honest, my personal experience with chickens up to just recently, has been minimal. Various relatives on both sides of my family have had chickens, but in my childhood visits, they were just part of the scenery to me.

My grandmother (Arabella - this blog's namesake) lived on a farm in Illinois, and during her annual escape-the-snow-in-winter visits with us, she told us many stories about her horses, sheep and other livestock. My favorite stories were about her pet chicken, Chick-a-biddy, that used to follow her around, 'just like any dog would'. I was quite charmed with this idea and vowed that someday I too would have such a chicken, and would name it Chick-a-biddy. Growing up in suburbia, there were no chickens anywhere close by, but once we left home and the parents moved to a more rural area, my mom, perhaps returning to her hillbilly roots, got some chickens, which produced the first blue-green eggs I ever saw.

When we first moved here, there was an old couple living on a small farm, right in the middle of town next to the main highway, who sold cut flowers. It was the kind of place with a hand-painted sign next to the mailbox, where you pulled off onto their dirt driveway and chose your flowers, which were sitting in metal cans full of water, and left money in another can on the same table. One time I drove all the way in to meet the owners and they turned out to be these darling people with wonderful old-fashioned names (Casper and Grace?). They showed me their flower beds, their vegetable garden, their barn and their whole place, and all the while banties were skittering here and there, pecking and chuckling around our feet. I fell in love with bantams at the moment.

For many years my chicken dreams stayed in the background, since I assumed the city didn't allow backyard chickens, and my sweetheart expressed a strong desire NOT to 'live on a farm.' However, several years ago I found out that indeed, one could have chickens in town (no roosters) and a few friends began to get hens. I was increasingly jealous. Then, last spring, 'eat local', 'grown your own organic food' and 'backyard chickens' all came together in my life when suddenly, without warning, Don changed his mind about chickens.

I nearly crowed with delight, and started making plans. 3 people at the bike shop have chickens and they all encouraged me to go for it. In the end, though, I realized I was just too busy with a couple of huge projects that wouldn't be coming to fruition until mid-summer, and I didn't have the time and energy to also deal with starting chickens until it would be too late to get chicks locally. Reluctantly, I decided to wait a year.

In the meantime, I did research. I read books about chickens and coop design. I visited friends' coops. I subscribed to Backyard Poultry magazine (I know, that's really nerdy). I scoured the internet for sites about chickens. I read chicken blogs. I ordered chicken supply and hatchery catalogs. I took copious notes. I attended a showing of the wonderful documentary film about backyard chickens, Mad City Chickens. I met a whole bunch of 'chicken people' and found they were just my kind of people. (Who knew?) I took a class on chicken-raising from the county extension service. In short, I went chicken crazy.

Pretty early on, I realized I needed an additional reality check. Yes, I wanted chickens -- but my own in-person experience with chickens was pretty much nil. What if I got chickens and then didn't really like being around them? Maybe I was only in love with the IDEA of having chickens? Time for a field test. On a blistering hot August day last summer I went to the county fair and scoped out the poultry barn. I always love going to the fair, especially seeing the 4H kids with their pigs, goats, sheep, llamas, calves and horses. But I haven't hung out much with the poultry end of things, so that was my mission.

Wow, I never knew there were so many kinds of chickens. Being a show, there were a lot of more decorative types of chickens, and lots of gorgeous roosters, which of course I can't have, but also lots of regular old laying breed-type chickens. One HUGE rooster (a cochin, I think) was the size of a small dog. In the end, I came away with some definite opinions about what breeds I wanted, and the assurance that I really would like to hang with some chickens.

This spring I'm super busy again, but the chickens have risen to top priority as I realized the feed stores probably wouldn't have chicks for much longer. Armed with my Top 6 list of Best Chicken Breeds for me, I headed out to do serious chick availability research at all the feed stores within 15 miles.

Right. What was I thinking?! I never got past the first place. The minute I walked in the door and heard the cheeping in the back corner, I was a goner. I emerged an hour later with a box full of chicks, a feeder, a waterer, heatlamp and a sack of feed.

I rushed home to set up my 'brooder' -- a galvanized metal washtub rescued from the garden, full of -- ta da -- chips from the remnants of the birch trees that were cut down recently. Once I got them in there, they look mighty cute, though a bit stunned by their traumatic journeying. Hmmm, that box looks awfully small...... 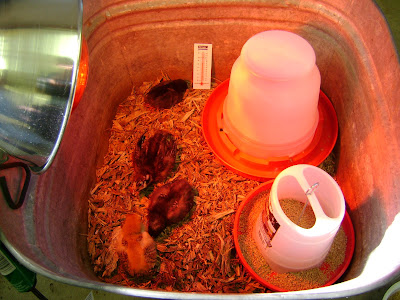 And then I started to worry. What do I know about birds? Practically nothing. I've been around cats my whole life, and they just naturally tell you what they want. They also cuddle right up and purr. Chickens don't purr. They don't cuddle. They just sit there, looking scared, peeping faintly.

Worse yet, we had to leave for a dinner date an hour after the chicks arrived. I could hardly bear to leave my babies. When we returned home after a really nice time with friends (our hosts have chickens too so I at least got a short chicken fix while I was away from my own wee darlings) I rushed to the garage with great trepidation. I was afraid they would all be dead of roasting (heat lamp too close), freezing (heat lamp too far away) or just sheer trauma. But there they still were, perking up a bit now and pecking cutely. Still, although I had a strong urge to sleep with them, my sweetheart refused to leave me there in the garage overnight.

The next morning they were still fine, and so I think we are all going to be ok. Meanwhile other members of the family are also taking an interest: 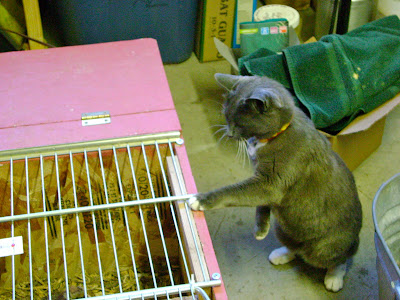