For a gardening blog, there has been precious little gardening reported so far this year. I think I'm working too much. Plus the weather has been totally crappy all spring (after a balmy but useless-for-gardening-purposes winter) and we have had about 3 warm (as in t-shirt) weather since March. The plants waited and waited to leaf out, green up, sprout, etc. but have finally given up in disgust, waiting for sunshine and toasty temps, and are growing anyway. And freezing their little plant butts at night.

It seems like all of the semi-decently warm days have coincided with my heavy work days. I know I'm making excuses. And full disclosure forces me to reveal that, while it's true the spring has been cold and unfriendly, there is another reason I'm so behind in the garden: my chickens. Omigosh, they are such a distraction, I can't believe it.

I go out with excellent intentions to do 15 minutes of weeding. On my way out to the garden, I pass the chickens. Then I have to stop and er, make sure they're alright. Sit down and watch for a while. Eventually get up and actually go out and start weeding. Hmm, what's this: an earwig? I bet the chickens would like to eat a tasty earwig. Pillbugs? Cutworms? Centipedes? Even my precious earthworms? Yes, they all get collected in a bowl and thrown into the chicken box and instantly the mayhem begins.......

Personalities are developing. Hawkeye and Olive are the fastest at darting in first, and quickly snapping up multiple bugs. Betty waits for an opening, then dashes in and usually grabs something big and yummy and long. Lucy doesn't seem to bother much with pecking her own bugs -- she waits until one of the other chicks picks something up, then chases her around and around, trying to steal it.

After extensive reading, talking with friends who have chickens, and looking at a lot of coops in a local chicken coop tour, I finally decided on the kind of coop I wanted, and a friendly local woodworker is making it for me. Meanwhile, back on the (chicken) ranch, my chicks are growing and growing and growing -- I can't believe how fast. Outgrowing their borrowed brooder. Earlier last week, when the weather was (briefly) warmer, I created a sort of outdoor chickie day spa for my girlies, out of a second-hand portable dog run, some hardware cloth, a tarp, some cardboard, composter parts and boards. 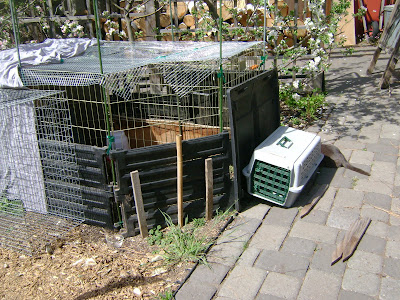 As you can see from this interior shot, it is quite luxuriously appointed with actual soil, grass and exciting fresh, outside air. 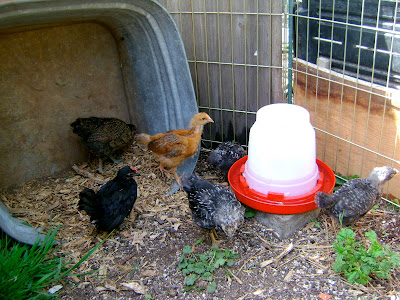 It has a certain poor white trash look that really adds to the ambience of my weedy garden. I'm not the only chicken fan in the family, either: 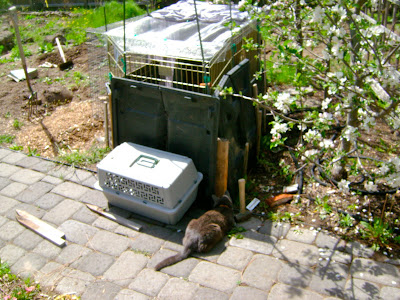 After only a few days of 'warm weather', it got cold again -- hard frost at night and cold, blustery days -- so I kept the girls inside day and night. I borrowed an additional wire cage and split the chicks between the two, to give them more space. Am I spoiling them? Probably. Between anxious new motherhood and desperation at not having permanent quarters ready, I may be overdoing the 'keep chicks warm' aspect. It's so hard to know if the REALLY have enough feathers to stay warm when I've never had birds before, not even a parakeet.

It's pretty hilarious, trying to get them out of their night-time quarters and into the cat carrier I use to move them in and out to the day spa. They know I'm the bringer of tasty treats, and they really really want out of the cage, but I'm so big and scary when my hands come in and grab them that they just have to squawk and peep and run away. Sometimes they peck me, and this morning I am pretty sure I heard ..... a crow. Or at least the first attempt at one, by Maggie. Or should I say 'Max'? 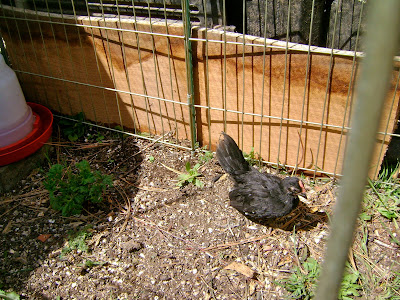 I never suspected chickens would be so funny and entertaining. Dealing with Maggie, if she turns out to be a 'he' might not be so funny. We are allowed chickens here in town, but hens only. Roosters are deemed too noisy for the city. And I'm not sure I would want a rooster, either, though I would be willing to give it (him) a try if I didn't worry about annoying my so-far unsuspecting neighbors. My plan B for roosterization is a bit fuzzy at this point, but I may have to step up the planning. Keep your fingers crossed it was just galline laryngitis.
Posted by Unknown at 9:00 PM