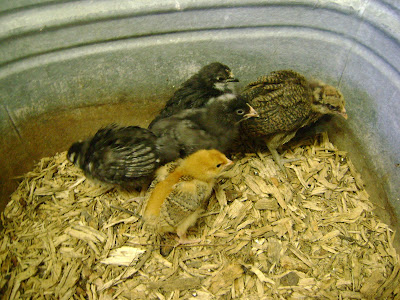 I know, you can only see 5 chicks in that photo. But there were 6. Or maybe the 6th one came later. I had to go to 3 places to fill my little flock. Why 6? After researching chickens until I had memorized all the books, I wanted one of each kind. Not having the space for any rare, endangered or strictly-for-show darlings, I still had a short list of 4-8. Maybe it's my personality. Last year I had Seed Greed. This year I had Breed Greed.

Want to meet the girls? Not all have been named formally -- some names may change as feathers come in and personalities develop. But here are the Final Six Chix, in all their original cuteness.

First is Lucy -- small but spunky, like my mom, whose name she bears. She is supposed to be a standard Columbian Plymouth Rock, but she is looking awfully small compared to the other girls, and I fear she may turn out to be a bantam. In my inexperience, I can't tell if she is just a lot younger than the others (ie a week) or truly smaller; time will tell. There was some confusion at the feed store about this. In the meantime, and regardless of her current smallness, she doesn't put up with any guff from the other chicks -- or from me. 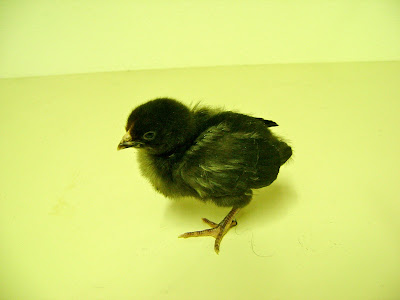 Next is Olive, a Silver-Laced Wyandotte. (get it?) Olive is definitely bossy - I named her after a childhood friend. She is brave and not as afraid of me as the other chicks. Always on the lookout for food, and gets more than her share of any treats (worms! spaghetti noodles!), by nabbing fast and snatching away from others. 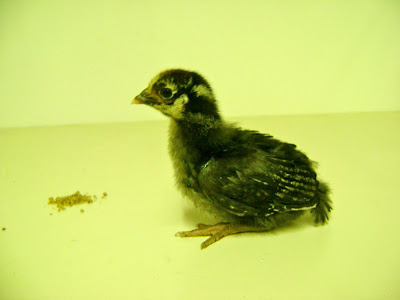 This is Priscilla, a Barred Plymouth Rock. Priscilla seemed like a good Pilgrim-type name. I definitely feel like chickens should have comfortable, old-fashioned names, and Priscilla fits the bill. In case she turns out to be a bit kinky, I can always think of her as Priscilla, Queen of the Desert. 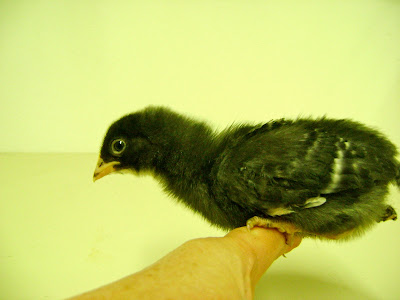 This next chick may or may not be called Pinky, after a Canadian aunt of the same name. She is a Brit Red, apparently a Rhode Island Red hybrid, but I can find almost nothing on this breed on the internet. The feed store catalog had a vague drawing of one, and it looks like she will be a lighter-than-your-average-R.I.R when she feathers out. Meanwhile, she is quite blonde. My sweetheart, the newly re-instated Canadian/US dual citizen that he is, thinks she should be called Elizabeth, after 'his' queen. While I am all in favor of people in other lands having queens, I am not personally interested in having one. And I'm not sure I want to be calling a chicken 'Elizabeth'. I fear it will devolve into 'Lizzie' 'Beth' or hey -- maybe 'Betty' would be ok. (Old family joke.) In the meantime, here she is, the prettiest chick in the coop so far. She is not wild about me, except as a feeder. 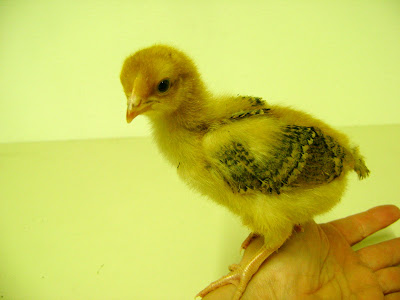 This is Hawkeye, an Ameraucana -- she will lay green or blue-green eggs. Her name may change too, since I suspect she will lose her distinctive hawk-like patterning around her eyes. But maybe not. Ameraucanas come in several colors, and I don't know how she will look when she gets her adult feathers. She will have ear 'muffs' -- I can hardly wait. She is the biggest (oldest) and fairly dominant. 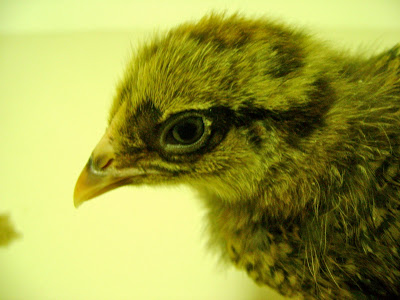 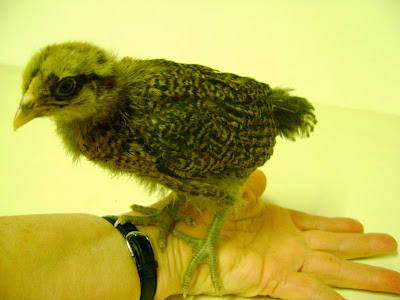 And finally, here is Maggie, an Australorp. I had to go to a third feed store to find her, and she is the scraggliest chick of the bunch. In my chicken newbieness, I didn't know whether she was actually unhealthy, or just at an awkward spot in her feathering-out. In the week that I've had her, she has calmed down and is looking a bit sleeker. I think she's ok. She is definitely the wildest, thinks I am Satan Incarnate to Chickens whenever I enter the room. Sigh. I guess they can't all be pets. Australorps are famous egg-layers, and she will be a green-tinted, iridescent black all over. 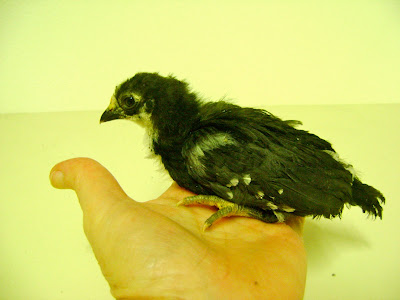 That's my little flock. And, as these photos were taken an entire week ago, they are now completely outdated. The girls are much bigger, and a couple are nearly feathered out. I can't believe how fast they are growing and changing. I am excited to see the new feather colors and patterns coming in. I am also getting nervous because my outside coop is not yet built. But plans are afoot and I go on a city-wide 'tour de coops' tomorrow, for ideas and inspiration.

And here they are in action: