They came, they saw, they asked questions -- Back Yard Farm Tour Day One 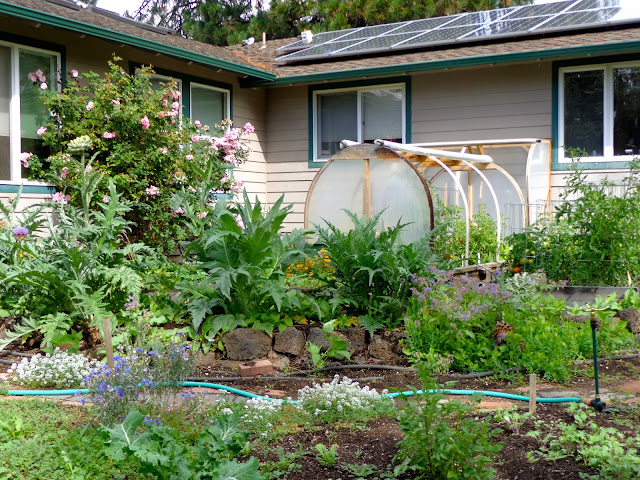 The 2013 Bend Backyard Farm Tour is history.  On a beautiful sunny Saturday, I had over 100 visitors to my 'farm'.   I was so busy I never had time to take a break, and didn't get 'lunch' until the last guest departed, a little after 4:00.

I was so busy I never even took out my camera, so I have no photos of the day -- sorry.  Just for the record, though, here is some of what they saw, under this morning's cloudy skies rather than the bright sunshine of Saturday.

The entrance to the back garden 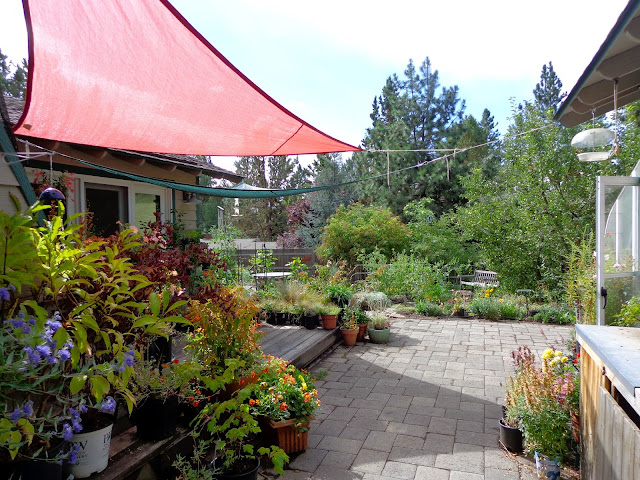 leads to a large selection of nursery pots, full of perennials waiting to be transplanted into the front yard.   I think most people just thought they were colorful container gardens.   Shhhh 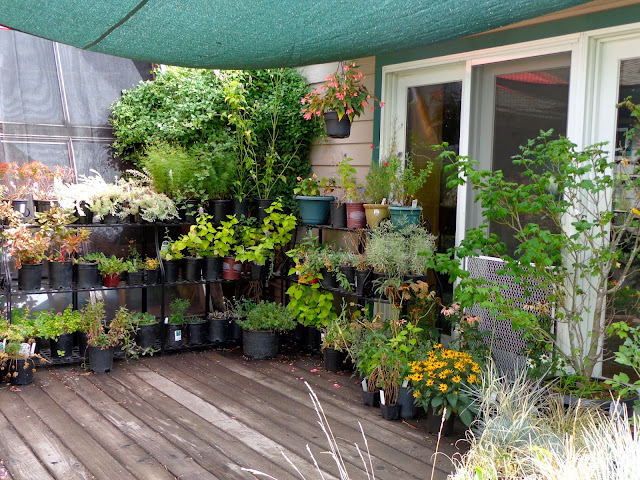 I will say that I was surprised by some of the questions I got.   I always expect to answer questions about tomatoes 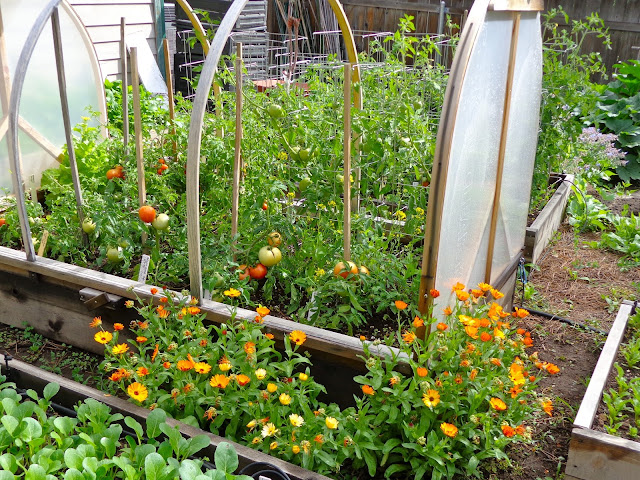 and dealing with deer -- which I did.   A large percentage of my visitors each year are newcomers to Bend and/or gardening in general.  Most newcomers arrive from balmier and/or wetter areas such as Seattle, Portland, or California, and I share the usual caveats 'frost is possible any day of the year' 'add tons of organic matter, the soil here is mostly sand' and 'choose varieties for short season maturity'.   This year, though, I had a most unusual experience, when I got to tell newcomers from Paisley, Oregon (south and east of here, even drier and colder and higher in elevation than Bend), 'hey, you'll love it -- it's warmer and we have a longer growing season'.

But I also found myself expounding on such random topics as:  why the big old weeping birch trees are dying all over town (they are being stressed by rising temperatures), the need to water trees and shrubs, especially newly planted evergreens in the winter (they frequently die over their first winter because when the cold, dry air dries out the foliage, the moisture cannot be replaced via the frozen soil) ...... best non-bee-attracting annual flowers for restaurant window boxes (how would I know, since I plant everything I can that attracts bees?!  ..... what to do for aphids and powdery mildew on lupine cultivars (take 'em out and plant native varieties which are never touched by either).   It's amazing what knowledge you pick up in 40+ years of gardening.

Of course I answered lots of questions about chickens, 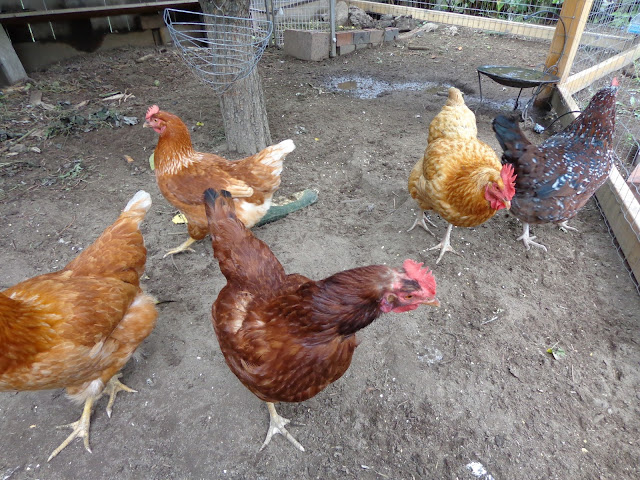 including 'what do you do to keep them warm in winter?' (nothing -- they have feathers and down that will protect them as long as they are dry and out of the wind), 'what kind are those spotted ones' (Speckled Sussex) 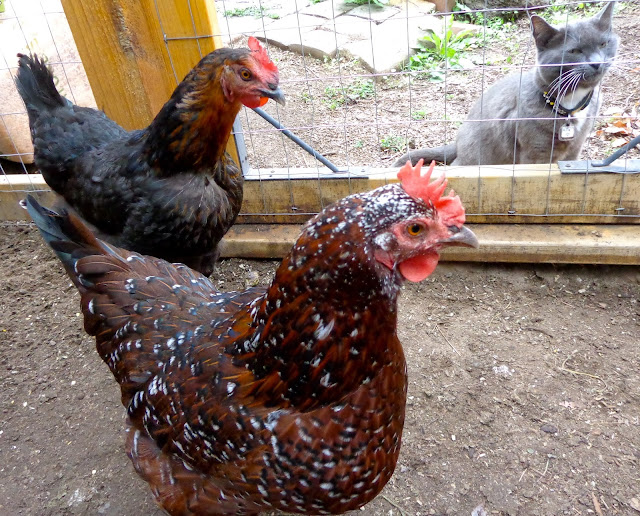 and 'why is that chicken in prison?' (because she has gone broody). 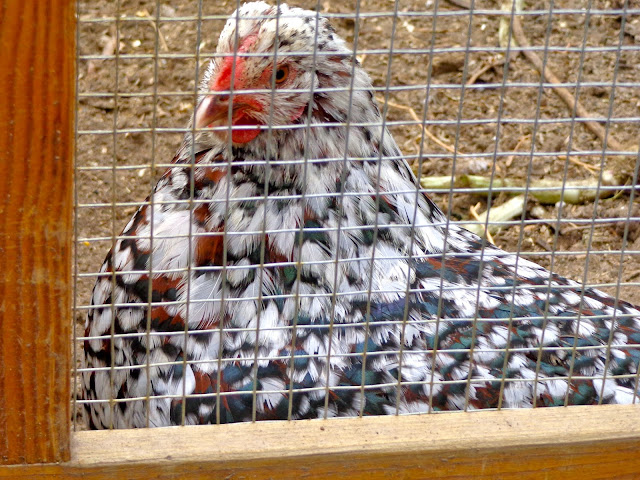 Also, does your cat attack the chickens?  (no, but they definitely keep an eye on each other) 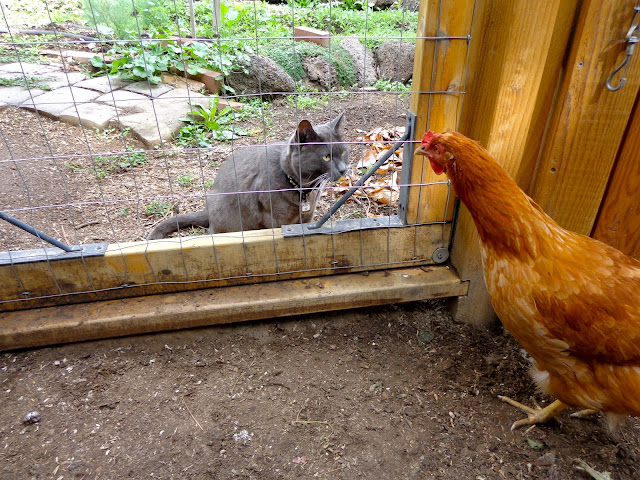 Every year there is one plant in particular that for some reason intrigues people, and everybody asks about it.   One year it was asparagus -- most people have only seen the early spring sprouts that appear magically in grocery stores and don't recognize the beautiful ferny leaves of the mature plant.   Another year it was borage, which I allow to go to seed because I love the blue, star-shaped flowers, and so do the bees.

This year people did ask about the borage and the asparagus, but the big surprises were fruit trees ('you can grow fruit trees here?!') 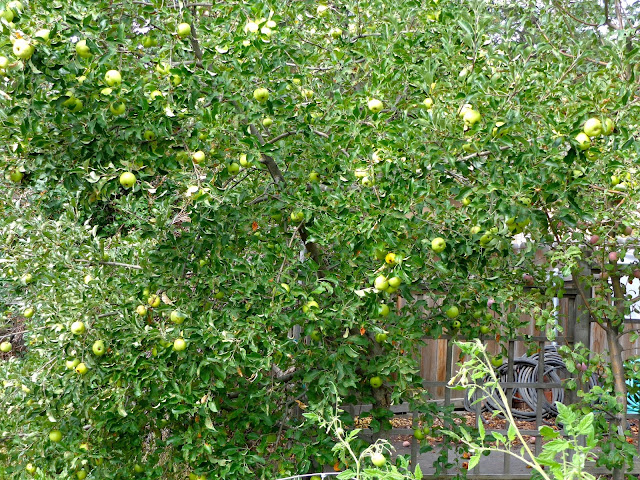 and my favorite question:  'what is that flower that looks like an artichoke?' (it's an artichoke). 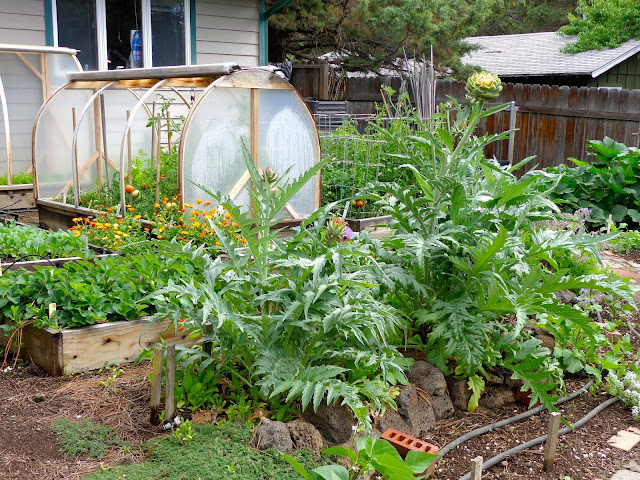 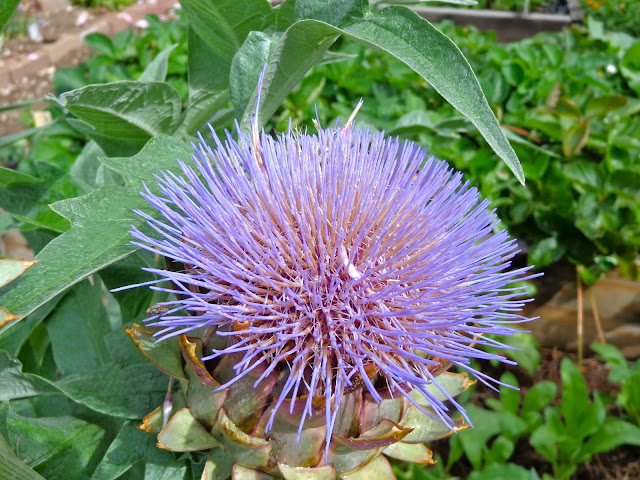 Overall, it was just fun to talk with a bunch of really nice, curious and often well-informed people, many of them experienced gardeners themselves.   Although there is a healthy locavore movement, and a recent crop of small farms raising vegetables and herbs locally, it seems many people still don't know much about how to raise their own food and are eager to learn.  I hope some of them went away with a spark of an idea to try a few kale plants this fall and next year.