I went, I saw, I got wet -- Backyard Farm Tour Day Two

With my own duty as official backyard farm host completed last Saturday, I set out the next day to see what others had growing.  Most of the tour stops on the second day were closer to actual farms than backyards.   I only made it to three before getting rained out, but they were pretty cool.

The first was a garden in an alley, behind a row of traditionally (boringly) landscaped newer homes on fairly small lots.   There are no backyards in this neighborhood, just an alley leading to garages.  The gardener, Natacha, fills every patch of dirt in the alley, and along the narrow spaces on each side of her house.  Here's the view from the entrance to the alley.   Can you spot it, beyond the second fence on the right? 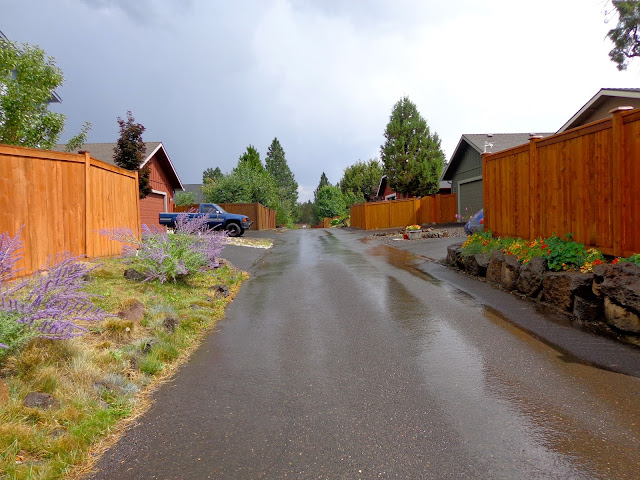 first hints of something a little different: 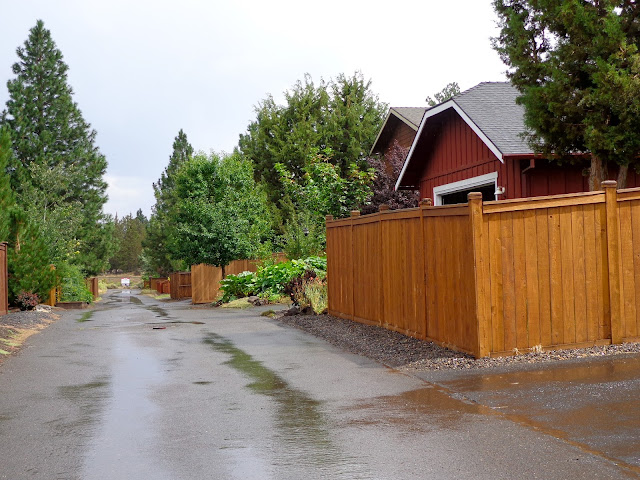 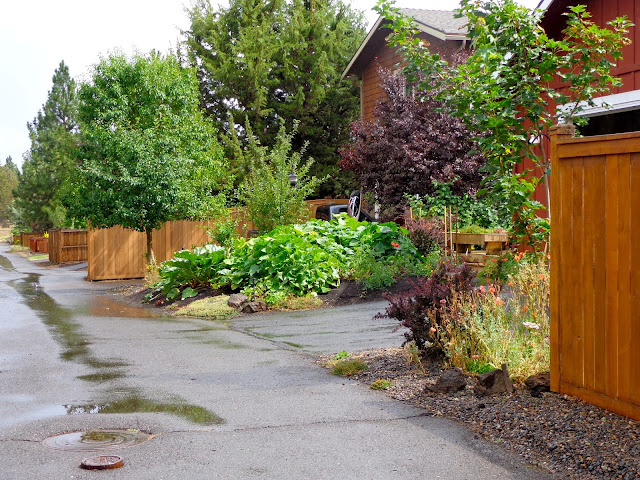 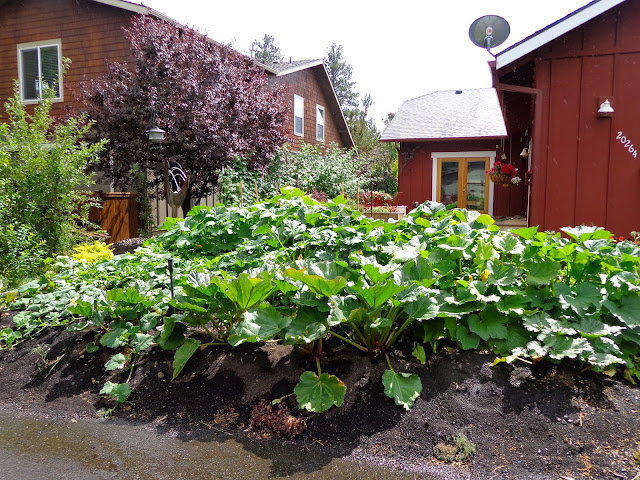 What these photos don't show is a long row of raspberries along one narrow side yard, and a packed potato patch filling the other, along with a couple of rogue zucchini plants hiding amongst the standard shrubbery in the front.  Birdfeeders, fountain and a big deck with planters full flowers and herbs complete the space.  Every square inch is edible.

With a thunderstorm looming overhead, I headed east to look at two herb 'farms'.  The first one, tucked into the back of a 1/2 acre lot (though it seemed much bigger), is still being created.   At one side is a newish vegetable/herb garden with a small greenhouse. 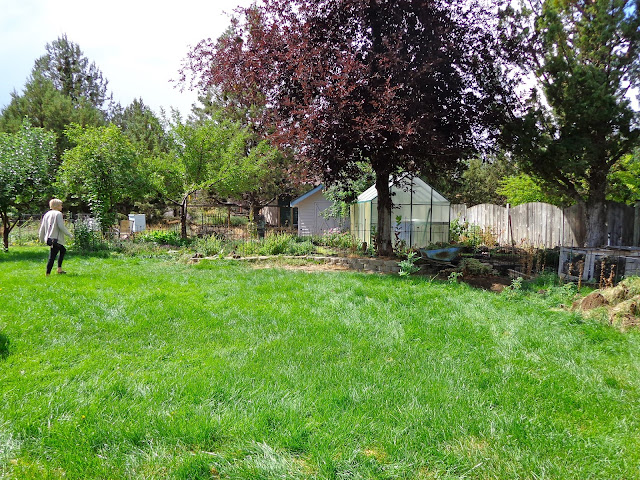 Across the yard stands a 50 foot hoop house, with sod clearing underway for a second house.   Are you sure this is only a half acre? 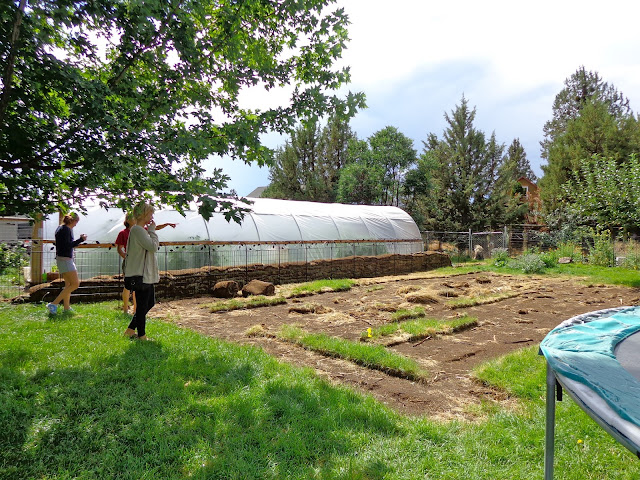 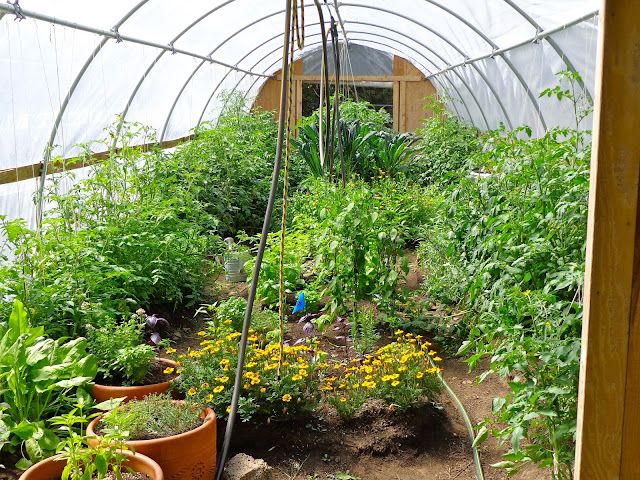 Under showery skies, I drove just a few blocks to another herbary, this one on a rocky, full acre lot.   A longer-established garden included raised beds, cloches, a large enclosed area for ducks and chickens, various sheds and greenhouses, all interwoven with native juniper trees and sagebrush and grasses. 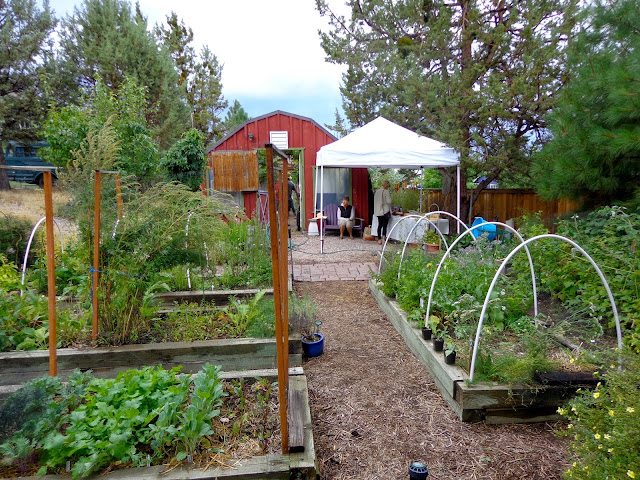 I love seeing what other people plant.   Kale, strawberries, chard, and tomatoes are standard.   Along with the green beings, there were other denizens to be seen.  Chickens.... 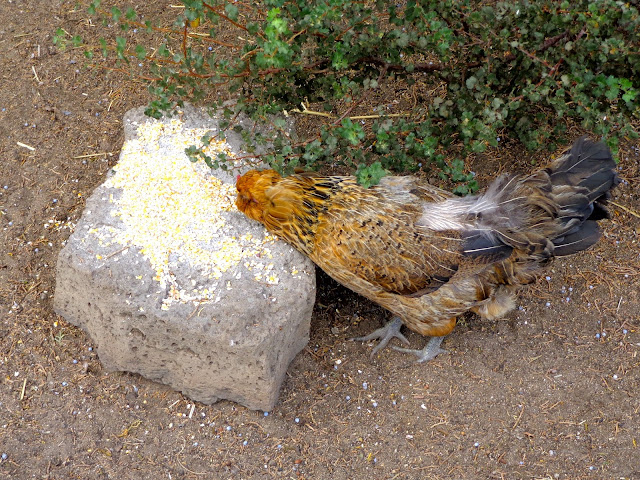 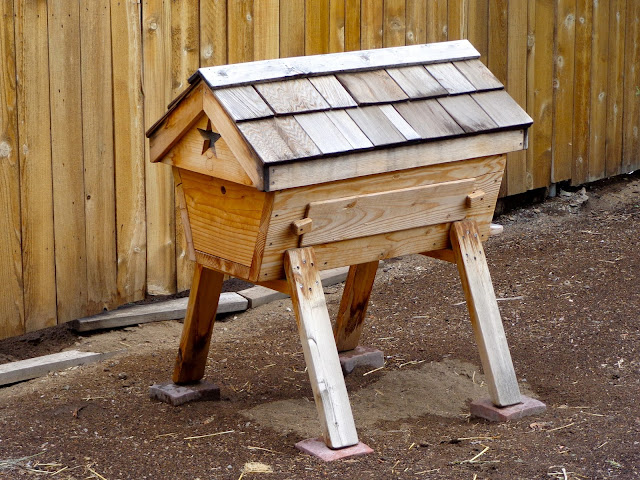 And my fellow tourers.... 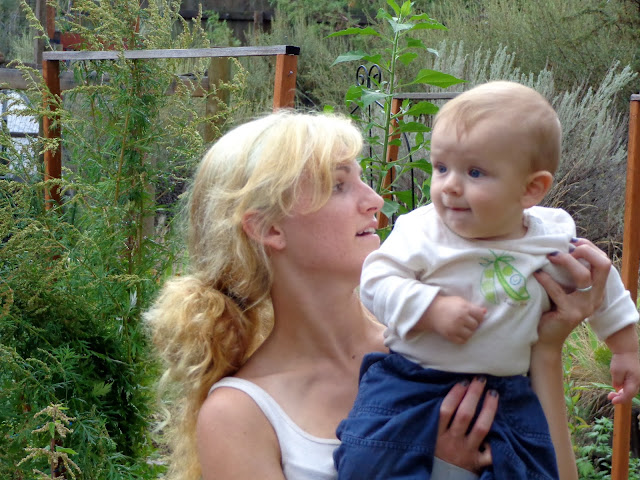 By this time thunder and lightning were right over the top of us.   After spending 15 minutes huddled under the porch of the house, I headed back to my car, parked nearly two blocks away, when the rain let up.   Before I got even halfway there, the storm redoubled its efforts, and despite my best sprinting form, I arrived at my car battered by hail and soaked to the skin.

At that point I decided to give up on the tour.  I was hungry and the storm cell covered miles and looked like it was here to stay (according to the next day's news reports, the storm generated over 7000 lightning strikes in our area that day and evening.)

Besides, I had one more errand before I headed home. 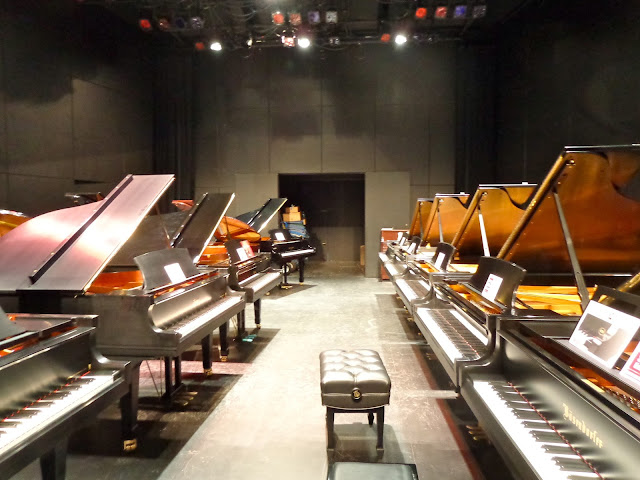 A special sale of fine pianos, onstage at the Tower Theatre downtown, needed visiting.  Pianos needed testing.  To a piano lover, even a wet one, there is no prettier sight than a crowd of shiny grands under lights.