When we bought this house, 33 years ago, one of the main reasons we chose it (in addition to the fact that we could afford it) was its location in town (halfway up a south-facing hill) and its orientation (long east-west axis) on the lot. Lots of south-facing walls to gather and hold heat, wide eaves for overhead frost protection, and a lot that slopes gently downhill, leading cold air down and out of the garden. What was perfect for gardening turned out to be perfect for solar as well. Large trees close to the house are mostly to the north, leaving the south-facing roof open to the sun's daily path. 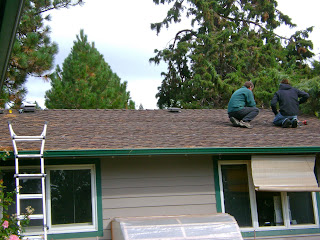 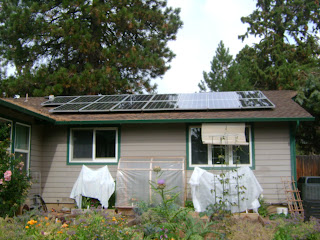 Now that we have our cool solar panels, we wonder why we waited so long to do this. Cost has always been prohibitive -- or so we thought until last August, when we found out about all the federal, state and local financial incentives. Unbelievably, they paid a full 3/4 of the total cost of our 3.75 kw system. Some come in the form of tax rebates, so we will have to wait until we pay our next taxes (April) before realizing them. One was from something called the Energy Trust of Oregon, which paid 1/4 of the cost of the system right off the top -- this is a fund set up through our local power company that we have, as ratepayers, apparently been paying into for years. Sweet!

The other big reason why I haven't been more proactive about researching solar for our home was my own longtime desire to be 100% off the grid -- to generate all of our electricity with a home system. That really would have been far to expensive for us to do, so I just wrote it off and never seriously looked into evolving options.

What I have come to realize is that even if all we do is reduce what we buy, it is something. 'Reducing our carbon footprint' is a trendy, PC term for 'using less', ie conserving energy, which is a smart thing to do in any day and age. In these days of world-wide awareness of global climate change (except of course in our own dear country, where business-as-usual trumps the future welfare of humanity), it seems more important than ever to look for all kinds of small ways to have a less negative impact on the planet that nurtures us. It also seems downright crazy NOT to be taking advantage of the sunlight in our area, where the local Chamber of Commerce boasts of 'over 300 days of sunshine a year). Why don't new houses all come with solar?!

Part of our system includes an online tracking program, which gives us a graphic display of the panels' current production 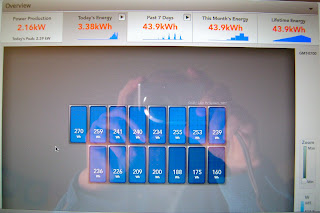 It also shows hourly production. Thus we cheer when the sun is out, and watch the power generation spike shooting upward, then gloomily watch when clouds or night-time roll back in, and down to flat it goes. It's a bit of a bummer, starting with a system in fall, since we are heading into the shortest days of the year. Yet we are still making power, 3 weeks from Winter Solstice. 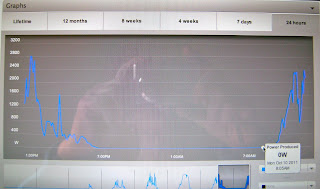 The new electric meter goes *both ways*, and when the sun is shining, we can stand out by the meter and watch the arrow pointing away from the house, indicating that we are not buying, but actually generating more electricity than we are using, and are sending the surplus *to* the power company. So satisfying.

And at the bottom of the online display is a cute little graphic, showing our total carbon offset as 'trees saved' and 'you have generated enough electricity so far to power XXXX houses for one day'. Here is the total after just a couple of days.

I have just paid our first power bill under the new system. It showed that we bought 761 kw from Pacific Power, and generated 112 kw from our system, from the 3 weeks of the month after our system went online. We saved $50 over last year's bill for October -- yay! We'll see how it goes this winter. We are still in the 'balmy' portion of late fall/early winter weather. And as the days grow longer beginning in February, those kws will be increasing. Mr. Sun is our friend!