Many years ago my sweetheart and I became addicted to British tv. Monty Python was our gateway drug, but PBS provided us with many memorable BBC moments in our early years of tv-owning. Hard to imagine it now, but we neither owned nor missed owning a television set in our early years together. My parents got our first family tv when I was 5 or 6, around 1957? but I was off to college before they got a color model. I don't think I watched anything on tv during the 6 years I was at uni, and once we were established in our new home of Bend, we relied on the radio for any and all news of the world -- that and the local newspaper, which came out on weekday afternoons and Sunday mornings. Thus I pretty much missed the entire Watergate era, and listened to Nixon's resignation speech on the radio.

I think we procured our first television set in 1976 -- a cast-off color model (my first) encased in a mammoth credenza-type unit that also included a record player, with yes, I think it had actual stereo and storage for LPs. It was huge and weighed a ton, and my sweetheart and a friend drove 8 hours (one way) from Bend to Twisp, Washington, to retrieve it from his mother's house. The impetus for this epic undertaking was the 1976 Olympics, which for some reason we had decided we wanted to watch.

In those years, the only tv station we could get was OPB (with a special antenna), and one pitiful local station, a CBS affiliate that featured news anchors and advertisements so lame as to be almost unbearable to watch. We set the channel changer (manual -- turn the dial -- how I miss those days) and discovered Brit-coms. One early show we grew to love was 'The Fall and Rise of Reginald Perrin', about a loser-type guy who hated his life and marriage so much that he staged a fake suicide, and began a new life as a purveyor of 'grot'. I don't know if 'grot' is an authentic English slang word, or if the producers of the show invented it, but it made a great impression on us, and has been part of our family vocabulary ever since. Grot is nothing special: useless stuff nobody would want. But Reggie sold it successfully (until he went broke) in his Grot Shop: bad paintings done by family members, homemade wine of hideous flavor: I can't even remember it all.

Fast-forward to today, and grot is alive and well in our lives. As an occasional knitter, I wax and wane in my enthusiasm for the sport. But alas, with rare exceptions, most of my knitted output tends to be fairly grotllike. Witness my latest passion: fingerless mitts. Wow, what a cool thing. Easy to knit, they work up fast and don't use much yarn. Patterns abound in knitting books, magazines and online. Mitts with cables, mitts with beads, mitts with lace fringe, mitts made with multi-colored yarn, mitts for casual and mitts for best dress. Make them all!

After being gifted with an 'easy' pattern by a member of my knitting group a couple of weeks ago, I launched into a pair the very next day. Yes, it turned out to be easy, though I had to make a trip to my favorite yarn shop for coaching on a minor point. Yes, it was fast. Yes, yes, yes. But then what? I put them on and couldn't figure out why, where, or when I would ever actually wear them. 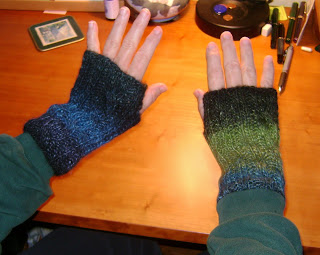 a) I hate things on my hands. I can't stand wearing rings, or having long fingernails.
b) I hate half-things on shirts, pants -- they've gotta be long or short
c) If my hands are cold outside, I want full-finger gloves. If I'm cold inside, I put on another layer and sit by the fire.

But they are so cute! So ...... Dickensian. I saw a prime example on the fingers of Jeremy Brett in a rerun of the classic Sherlock Holmes series only last night.

So I did what any smart person does these days: I Googled my question. 'Why wear fingerless mitts?' and got two opposing answers, both of which I had already figured out for myself:

1) They are stupid unless you are Madonna. If you want to keep your hands warm, wear real gloves instead. If you are not Madonna, and want to look like an escapee from a Victorian poorhouse , go ahead and wear them. Preferably hand-knitted.

2) They are ultra cool. Keep several pairs around for different fashion needs! Look great with boots, tights and mini-skirts.

Uh huh. Right. 'Fashion' and moi don't go in the same sentence. We are not even in the same country. The closest I've ever gotten to 'chic' is 'chick' -- good thing I have chickens.

So I scratched my head, admired them one last time, 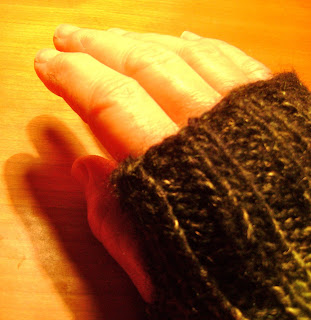 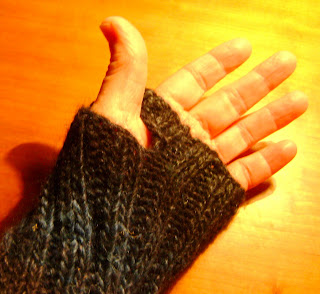 and gave them away to the mother of three of my students. She was thrilled, said she wears them all the time, and when I ran into her in the grocery store 3 days later, she had them on (tasting wine) and said she hadn't taken them off since I gave them to her. She is not Madonna, but they exactly suit her eclectic style. Now her three daughters are all jealous. Ha! I see a project materializing: wee mitts for the kids. Now, where's my stash?!
Posted by Unknown at 8:37 AM