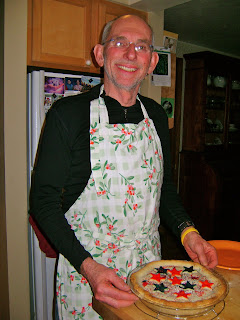 Many years ago, I was the (reluctant and unskilled) pie maker in the family. Then, one fateful day, I was saved. On that occasion I was under pressure to get 'er done, and the crust was not behaving. In fact, it was being impossible, as only pie crust can be impossible. I was younger then, and less philosophical about cooking. I was, in fact, very impatient when foodstuffs did not behave according to my express command. Silly me. So there I was, wrestling with a recalcitrant crust, getting madder and madder as it got less and less crusty, flaky, and light. And then, just like that, I snapped. I picked up the offending dough and hurled it across the room, where it landed -- thump -- against the dining room wall.

My sweetheart, observing this outburst with alarm, took quick, decisive action, and rushed in to stay my hand, which was reaching for the dough, preparatory to stomping it into the floor. "I'll take over from here," he said with a soothing, manly tone, and thus I was saved and so were all future family pies.

He took over all crust-making duties and I happily fell to filling-maker. Eventually he took over that as well, and nowadays I merely decorate the crust, as the occasion demands. We are not a cake-eating family, so whenever a dessert is needed for potluck, party or family feast, out comes the pie dish, the rolling pin, and the apron. His pie-making renown has spread through our circle of friends, bike teammates and other eclectic groups. He taught a local baker how to make crust, and now she too is noted for her crusts and delicious pies.

Mostly we stick with cherry, since that is my personal favorite and it is quick -- no slicing of fruit or fussing with custard or meringue. The crust goes on the top and I go into artist mode. Well, I'm no artist but I can sense a theme.

And so, with no further fanfare, here is a short history of pies around Arabella's Garden, over the past couple of years.

Thanksgiving 2009 -- my first attempt to use food coloring. Mixed success, I would say. 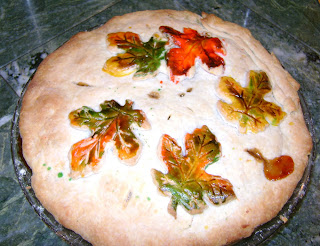 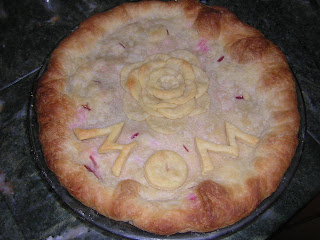 Cyclocross Nationals 2009 --this one is a bit abstract, but bicycles are tough! You can see the riders, the crowd, and the characteristic smokestacks in the Old Mill District behind. 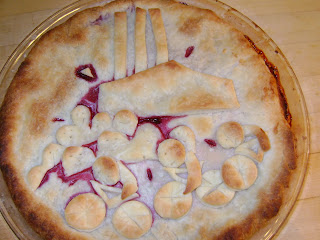 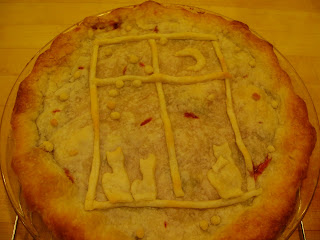 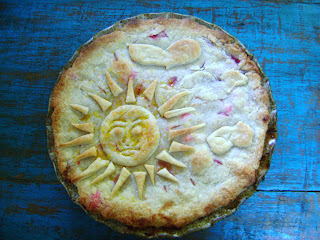 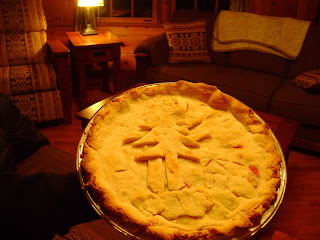 Cyclocross Nationals post race team party. They were all stars! 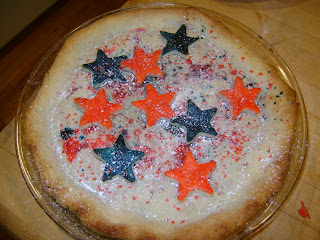 Tomorrow is Christmas, and yet another pie will be born. What inspiration will overtake us?
Posted by Unknown at 11:37 AM

Email ThisBlogThis!Share to TwitterShare to FacebookShare to Pinterest
Labels: pie