It's a long stretch of mind and memory, from the lushness of the garden here in late August, back to the cool, wintry days of March, when I was ordering seeds and well, getting a bit carried away in my annual attack of garden optimism/amnesia. But honesty compels me to come clean on both successes and failures. After all this is not one of those garden blogs with photos of a gloriously weed-free, tastefully landscaped Sunset magazine-worthy garden. And things being the way they are here in Arabella's Garden, it's probably best if I ease into this slowly, one Impossible thing at a time.

Today's report features Artichokes, No 1 on the Arabella's Garden Impossible Dream 2009 list. On the positive side, I can say that my artichoke babies did NOT succumb to the plague of evil-looking black aphids that attacked my first artichoke-growing attempts several years ago. There are a few aphids, true, and they are (ick) black, but only on one plant and there is an ant's nest quite close by so I have left it as a sacrifice to the insect kingdom. Also on the positive side, since I had excellent (for artichokes) germination, I have 3 other healthy plants. On the negative side, I think I planted too late and I doubt the plants will have time to bloom before they are cut down by frost untimely. 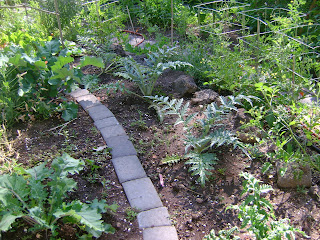 Let me first say that I have incredible melon vines. In the greenhouse. In fact, they are so healthy and vigorous that they are threatening to smother the sweet potatoes. But despite blossoms to Texas I see not a single wee melon. Lack of germination due to bee absence? Could be, though I have gotten fruit on melons in the greenhouse before. The door is open day and night and there are 2 vents also open. Too much nitrogen? I don't know but I am kinda bummed, since the outdoor melons died aborning.

I started them off commendably well - perfectly timed one month before setting-out time, but had terrible germination. Then the babies were either drowned or washed out of their pots in an early June thunderstorm while they were on the deck hardening off. The pitiful survivors died within a week of being transplanted into the garden. I replaced them with seed, but of course that gave them a very late start. I am left with one melon and one cucumber, just now starting to vine. I may get fruit, I may not. I'm not holding my breath or researching recipes. 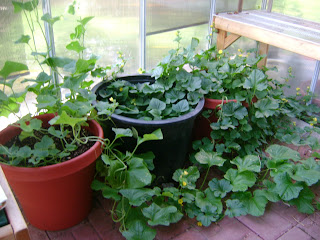 Impossible Dream No 3: Beans for Drying.

Alas, there is no photo because none of the seeds I planted came up. Since I planted 3 different varieties, all from different seed companies and from the current year's crops, I can only blame myself. I was away from home right after planting all of these, and I think the seedbed dried out at a crucial point. Maybe next year.

It's ok to laugh. The sweet potato vines are nearly hidden amongst the melon vines, in the lower photo. They are pretty, though, so I'll have to give a final report in a month or so, after (if) I harvest anything.

This concludes the bummer part of the Impossible Dream Report. Tomorrow I may have better news.
Posted by Unknown at 7:02 AM