Anyone out there recognize these plants? The first one was a birthday present -- most likely it's a bromeliad, but what kind? My experience with bromeliads has been minimal so far, and fatal -- to the plants. I'd like to keep this one alive, it's quite festive and cool-looking. The bloom spikes have these cute little topknots that remind me of pineapple fruits. Any guesses? 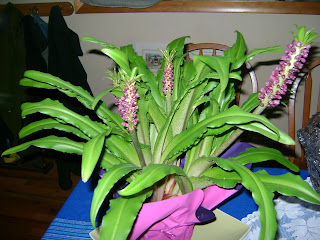 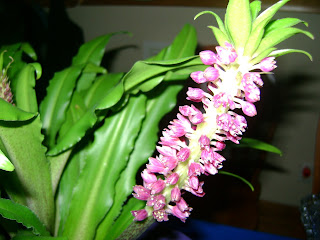 The next one has mysteriously arisen in my front garden for the second year in a row. I vaguely remember planting .... something .... here....... I think.. If so, maybe this was it. I did buy some shade lovers of doubtful hardiness, 3 or 4 years ago at the Portland Yard and Garden Show, and have guilty memories of allowing them to languish for many months in their wee packets of sphagnum moss before finally getting them into the ground in late summer. Not surprisingly, some of them appeared completely dead, but, being an optimist, I planted them anyway. Is this one of those hapless victims, risen like lazarus to reward me for my faith?

I know I bought several epimediums, but this doesn't look much like an epimedium, and besides it's blooming in late summer, not spring. Anybody know this cutie? 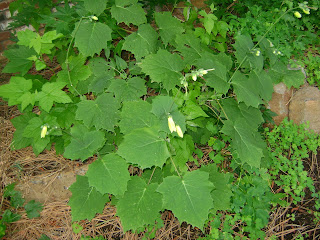 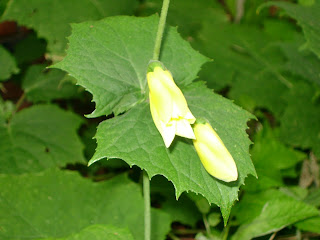