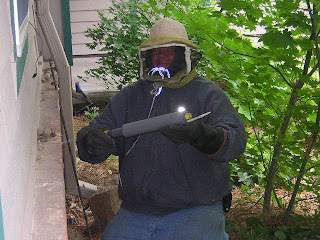 I did it again. I murdered bees. Or rather, I hired someone else to murder members of the bee clan.

A few days ago I noticed yellowjackets flying around my legs while I was turning on the hose to water my front garden. Just a couple, and they weren't attacking me, but still ...........

Looking closer, I could see a telltale hole in the soil, right up against the brick facing on the front of house, with yellowjackets entering and exiting. Uh oh. This is familiar. Last September we discovered a large nest of yellowjackets under the front deck. By 'we' I mean my sweetheart, who couldn't figure out why he was getting 3 or 4 stings on his ankles every time he walked between the garage and the front door. We looked around and found a nice little entrance/exit hole under the fascia board, right in the main walkway part of the deck.

After consulting our environmental consciences and the local 'pest control' guy, we decided we had to do something drastic (for the yellowjackets, anyway) and had him come out and remove, ie destroy the nest. It was about time for piano students to start wending their way to the front door and I just didn't want to see them getting stung. Or us getting stung either.

That nest turned out to be huge -- the guy who used a (somewhat environmentally nonlethal) poison powder to knock out the workers -- said it probably had 40,000 combined workers and larvae. Aiiieeee.

This nest turned out to be much smaller -- they were still ramping up to full size and worker production, since we're about 3 weeks earlier in the year. These guys are valuable predators but they are more short-tempered than the other bees/wasps/hornets we have around here, and once their nests get big they are very touchy and attack anything that comes near it. I am sure if I hadn't noticed the nest now, I would have gotten stung before too long. As it was, since it was only a few feet from the front door and right beneath the hose bib, I must have been stepping right on it each time I turned the water on or off. I was lucky!

So.......... I have bee guilt. I will apologize to the overlighting spirit of hornets, perhaps offer them some flower essences for rebalancing and stabilizing, and hope for all future nests to be far away from the house. Members of the wasp/hornet clan are very sensitive to 'noise' -- both audible and energetic disturbance, and perhaps there is something here that is drawing them to our home environment. A good reminder to be mindful of overall thought patterns in our home, and of the need to keep an open heart towards this home-and-garden as an integral part of the natural world.
Posted by Unknown at 11:15 AM