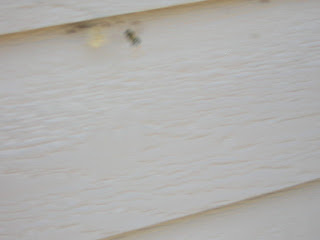 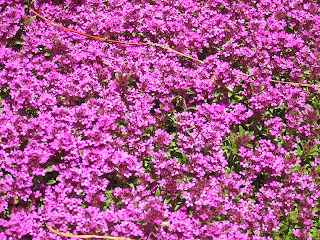 It's bigtime Bee World out there in the garden right now. I've pretty much been an organic gardening purist since I first set foot to spade in 1971. Oh, I've had the occasional fall from grace (emergency semi-killer death stuff for a yellowjacket nest under the front deck last summer) and the occasional minor evilness (wee liquid borax traps for house-eating ants) over the years, but in the main I operate from the principle of live and let live when it comes to critters.

So maybe I have lots of bees, hornets, wasps, and miscellaneous bee-like companions in my garden because I don't spray a bunch of horrible chemicals on everything. But I think it's also because I really like them, and tell them so at every opportunity. By that I mean outright talking, yes, but also I make a conscious effort to keep my mind and heart open and calm when I'm out in the garden, surrounded by these sometimes short-tempered insects. I find that if I move slowly and keep my emotions quiet, they ignore me completely, to the point where I can move among them without any problem and get quite close to observe them.

Honeybees are of course much calmer than their touchier relatives, various wasps and hornets. Honeybees are magical, and I love the sound of a flowerbed full of happy, pollen-covered bees.

In the lower photo you see -- or don't see, because they blend in with the flowers -- a whole lot of happy, happy honeybees, industriously working a bed of blooming thyme plants by my back door. I don't know why they love thyme so much, because the flowers are so small, but every year this bed, which has 3 or 4 different types of thyme growing together, all blooming at slightly different times, is covered with buzzing bees, from dawn to dusk, for over a month straight. The adjacent dianthus, which I love for the fragrance, they scarcely look at. Something for everyone, that's my garden motto.

Meanwhile, the top photo is a somewhat fuzzy shot of an unhappy paper wasp, looking for her nest, which has suddenly and inexplicably vanished before her very eyes. The photo is fuzzy because I was a too nervous to get close enough and stand still long enough, to take a really good, clear picture of her. Live and let live is all very well when things are going smoothly, but I never argue with a mad wasp. She had no way of knowing that I was the one responsible for the disappearance of her nest, of course. I had just discovered a small, 'starter' next (only a few cells and less than 10 workers) inside a cardboard box that had been resting against the house for a couple of weeks, and had hurriedly carried it off to a distant corner of the garden to open up fully.

She and 3 or 4 other sad, mad, and otherwise generally confused wasps spent the rest of the day flying around the former nest site, trying to figure out what had happened to their home and babies (snif) and I suppose, looking for a new place to start over. By the next morning they were gone, and I will keep my eyes open for their next move. I wish them well.
Posted by Unknown at 10:18 AM