In Search of the Vertical 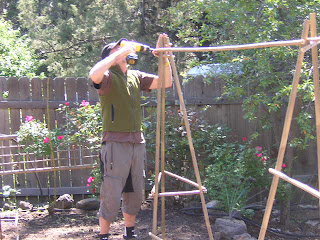 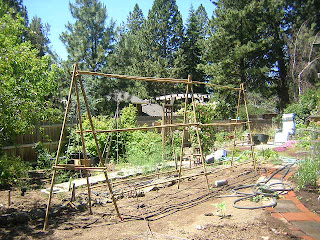 A vegetable garden, particularly early in the season, is largely a horizontal affair. And after a long winter, even an inch of anything green is a thrill. But in the spring the life force yearns upward in a powerful way. Still, most of the vegetables I grow top out by the end of summer at only a few feet tall. That would be asparagus, tomatoes, peppers and peas. I don't usually grow corn here in Central Oregon, most years it's a bust.

Years ago, when I first started gardening, I added bean poles and various other stake-type items without much plan other than to hold up vines. But through the years, I have watched such upright objects act as much more than mere vegetal support. For the human eye, they mostly provide a welcome break from the flat planes of the beds. For birds, though, they are landing platforms, baby-feeding zones and all-purpose resting places for beak-stropping, feather rearranging, danger assessment, and general surveillance, sunbathing and who knows what else.

A few years ago I decided to try building my own bamboo supports from long poles and waxed twine, and mostly they have been successful. I'm no engineer, that's for sure, so I have had my dismal failures. But eventually even the successful ones do rot out at the base, and this spring I needed to replace one long, ungainly pea/bean/sweet pea support that had toppled over in a fall windstorm. It was never very strong, but I had managed to hold it together with more and more wire and twine until it finally crumbled, beyond resurrection.

I ordered a huge bundle of even bigger, fatter, longer bamboo poles (8 footers) than I used before, a new cone of waxed twine, and enlisted my noble mate to help me. I found photos and plans for elegant, pyramidal tomato towers, which I thought would work made out of bamboo, as well as a long, elegant bean structure to replace the fallen one.

The manly one did his best. But alas, the imagined long, lean bean structure was crooked and wouldn't stand up no matter how we tweaked it. In the end it turned into a sort of long bean trellis with flying buttresses. I think it will hold up the beans, but it's no gothic cathedral. And the artistic pyramidal towers morphed into your basic quick-and-dirty 'grab 6 poles, tie them together at one end, splay them out in a circle, stick them into the ground and call them a bean tepee' supports. Sigh.

But already the birds are using them.
Posted by Unknown at 7:33 PM