Who's in charge here, anyway?

It's time for Action! in the garden -- but time does not always correspond to good weather.   We are coming off of a week of rain showers, cold winds and the odd spring snowflake, but heading into some gorgeousness real soon.

My morning garden stroll reveals the pear trees in full bloom, their fragrant white glory undoubtedly unappreciated by the chickens, pecking and scratching below.   They will appreciate the dropped fruit in the fall, and the shade will be welcome this summer.    The foliage also hides and protects the girls from the view of hawks overhead. 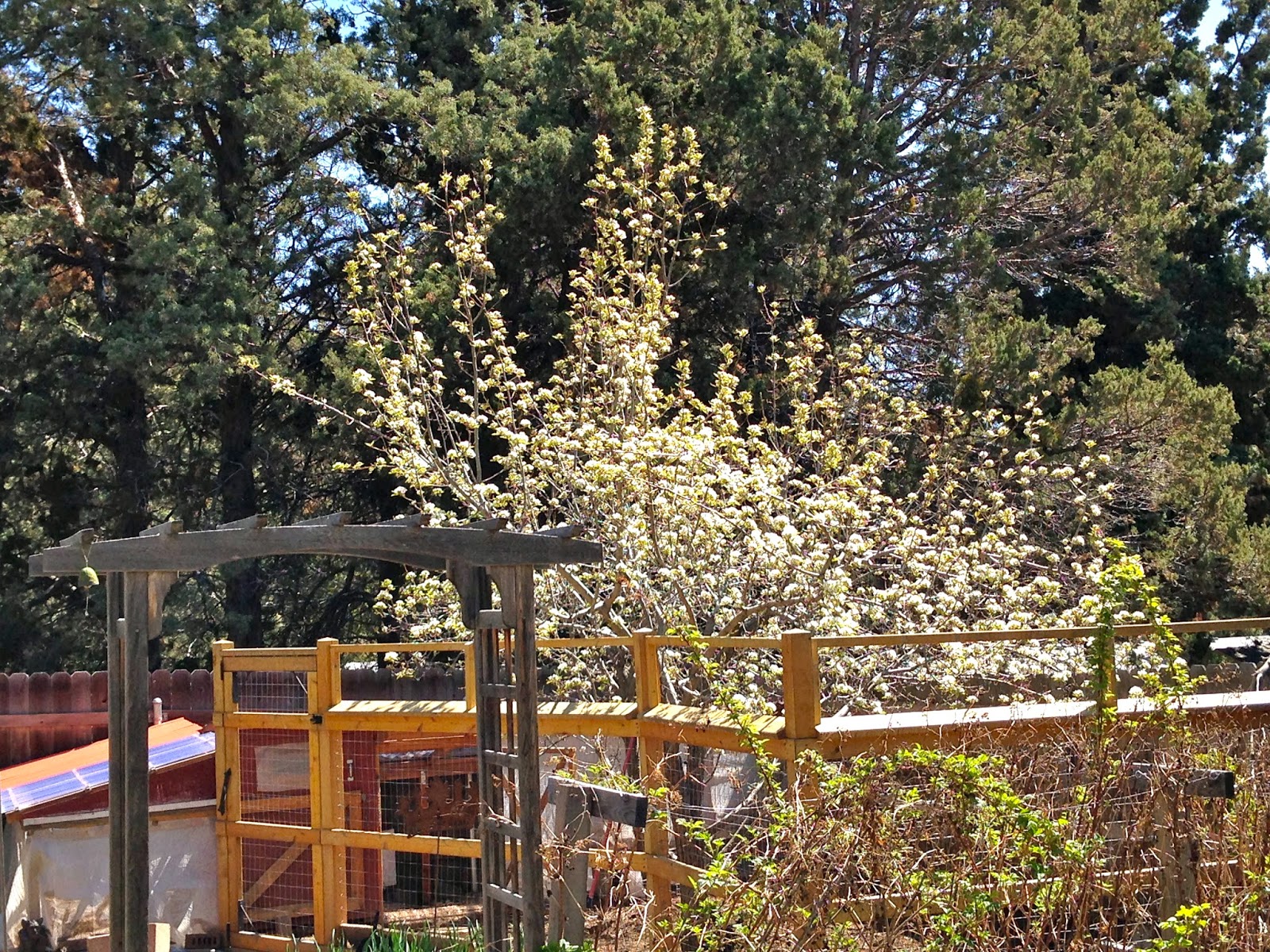 Shifting my gaze a little lower, I see the greening up of the controversial raspberry bushes in front of the coop. 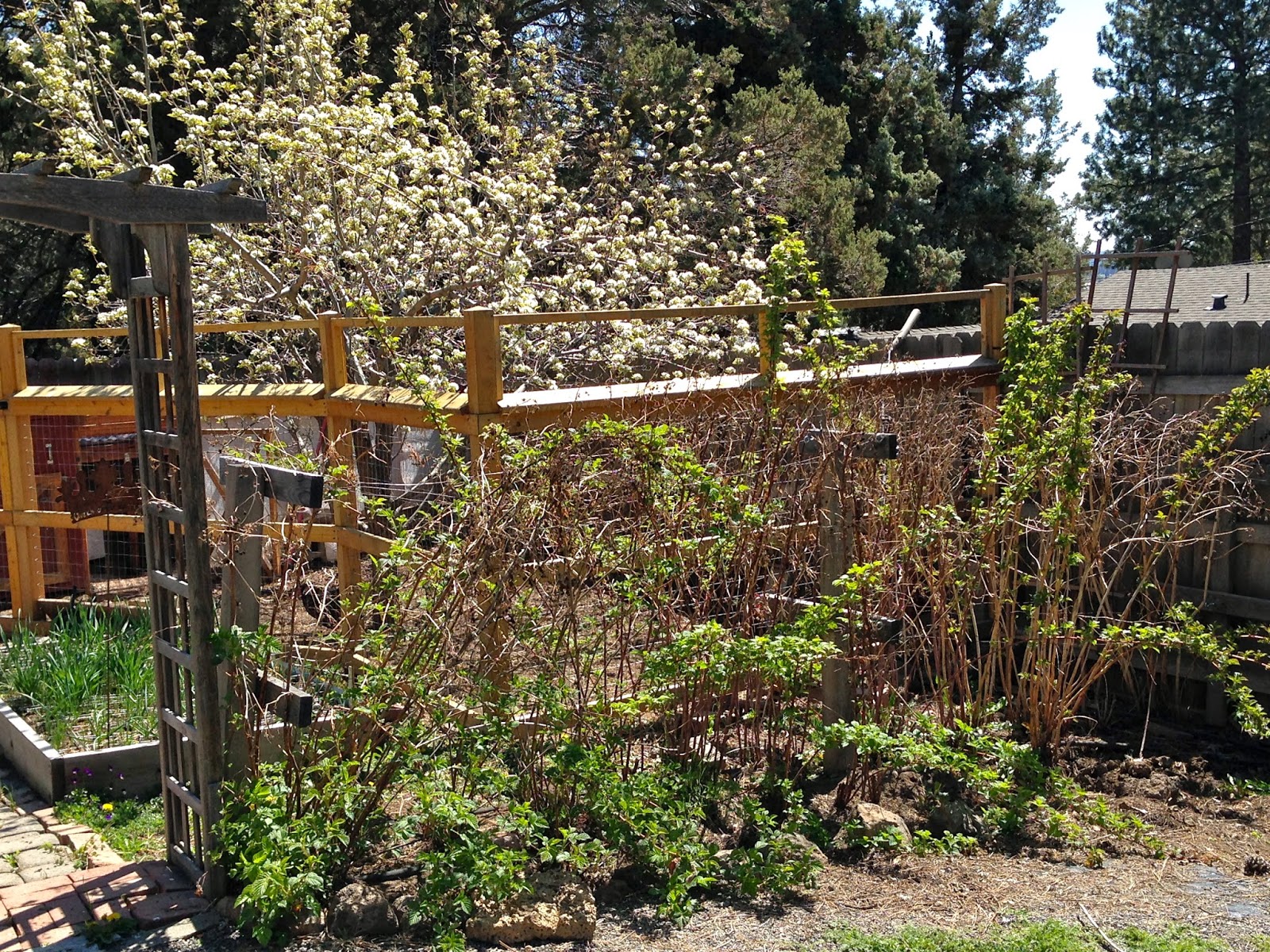 Controversial because they are both prolific (berries:  good) and rambunctious (free-running vines:  bad).   I planted them a few years back as a hedge to divide the back yard into 'rooms', and soon afterwards I got the chickens and they were a good screen for them as well.

But somehow I didn't fully realize how invasive raspberry bushes are, or why garden experts advised that they be planted in containers, or raised beds with deeply buried sides.   I trustingly planted them right in the soil next to a path on either side.   So of course they run everywhere, coming up under my brick paths, in my asparagus patch, my garlic, tomatoes, lettuce....

Personally I'm not wild about raspberries -- they are ok, but for me, soft and blah compared with other sweeter, tarter berries like strawberries and blueberries.   I can take 'em or leave 'em.   My sweetheart adores raspberries, and I confess I planted them mostly for him.   Here he is, picking breakfast a few summers ago. 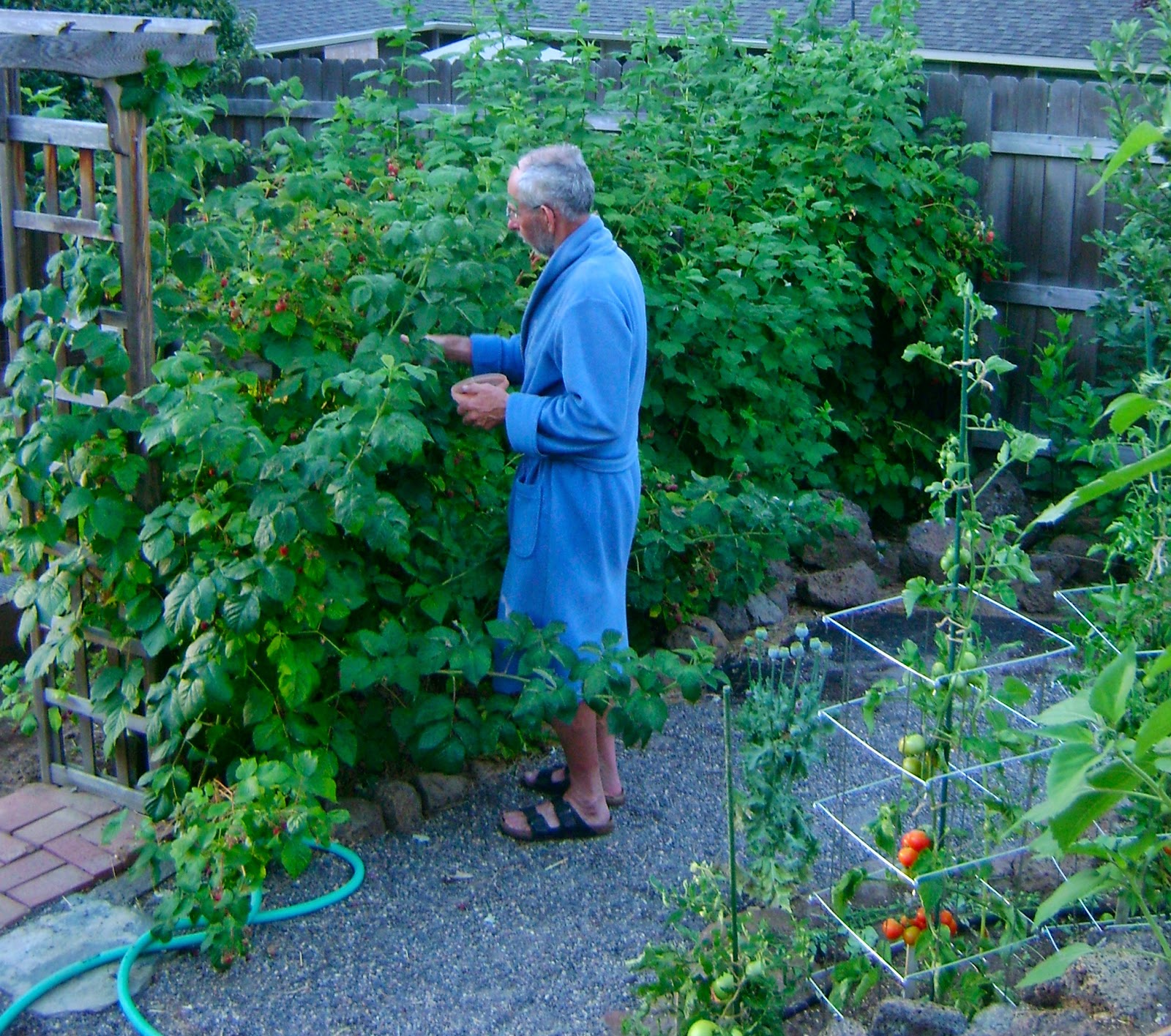 Every year I complain about spending precious spring gardening time digging up raspberry runners, and every year he gives me The Sad Look and points out that he never complains about anything I grow (hardly) and that he built the raspberry structure on my request (true).   So every year I grumble more quietly and dig on.

I don't know why, but this year I woke up one day and thought:  Right.  That's it.   I'm taking them out.   Here's why.   The raspberries literally groan with fruit every summer, but the height of the harvest is a time when the chief raspberry eater is gone for weeks at a time, working on bike tours.   I'm all alone with the raspberries, and I can't eat them all, or keep up with them to freeze.   Lame, I know.  So a lot of the crop goes to waste.  Even the chickens can't eat that many.

But I've been harboring an alternative plan and this year I'm putting it into action.

At the time I decided on a fruit hedge, I was debating between raspberries and blueberries (which I totally love).   In the past 15 years I had tried growing blueberries in various places around the garden, and they never did well.   They basically sat where I planted them, then eventually dwindled down and croaked.   I concluded our climate is too hot and dry for blueberries, so in went the raspberries.

Then I met George Snyder 'deaf blueberry grower' from Culver, Oregon, who sells blueberry plants in pots and claims they are completely winter-hardy, even in Central Oregon.

I was skeptical, but one day I saw a trio of his plants for sale at our local grocery store and when I got home I found they had slipped into my car along with my groceries.  (Yes, I paid for them.)

My skepticism lasted exactly 6 months, until my plants, lined up in front of my greenhouse, not only made it through the winter with no additional protection, but flowered and produced fruit the following summer.  Huh.  Maybe old George was on to something.  Next I dug up the last struggling survivors from my last garden blueberry planting, and put them into the same kind of pots.   They perked up and thrived and, the following year, bloomed and bore fruit. 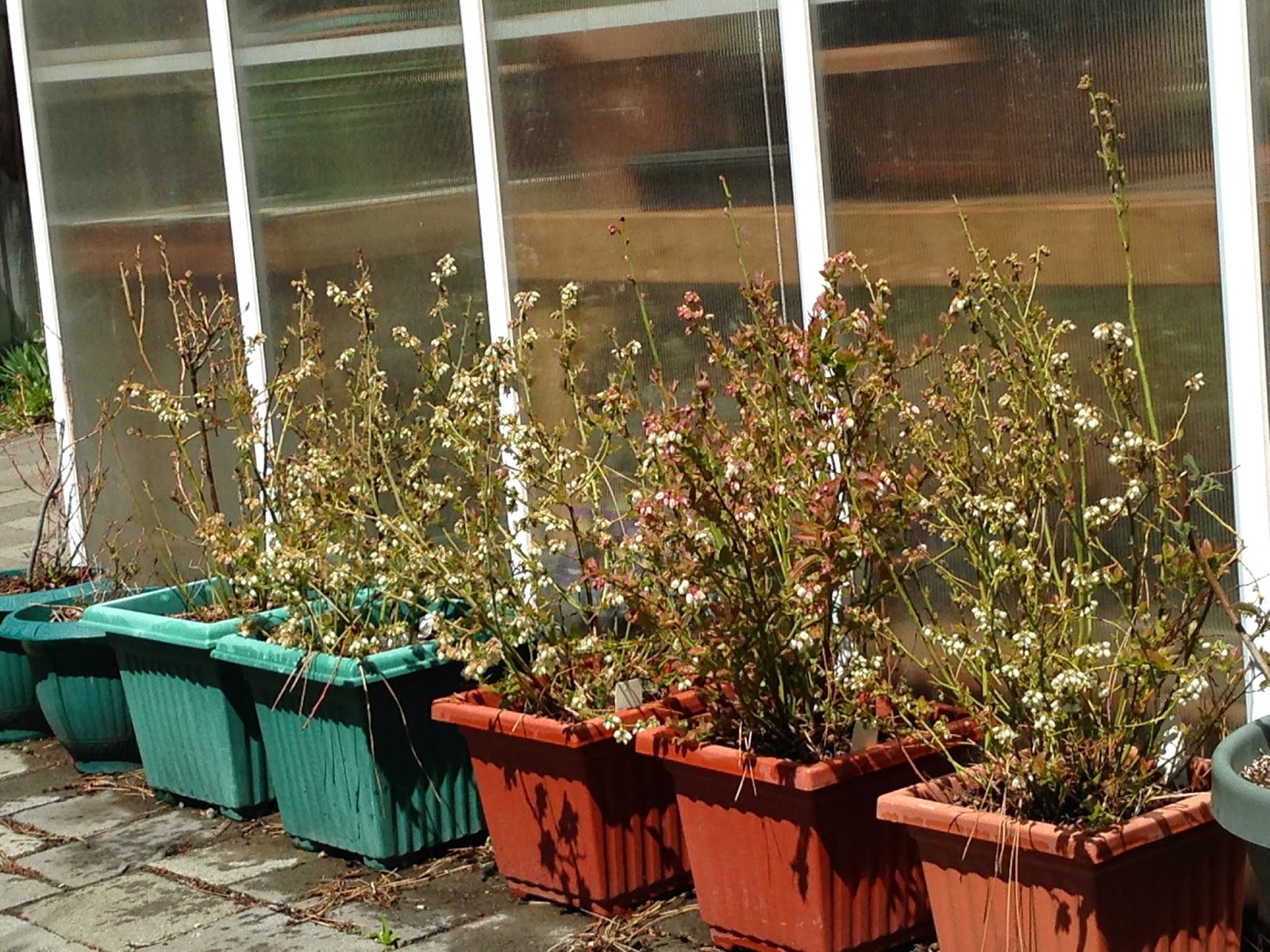 I did ask George what kind of potting mix he used, and he set me straight:  straight shredded hemlock bark.   I splurged on some acid-loving soil mix and used it half and half with the bark, and it seemed to do the trick.   In retrospect I realize that my former blueberry failures came from several factors:   too much shade/too much sun + too little water + soil too neutral.   Go figure -- blueberries actually need acid soil, just like all the experts say.   I guess those token handfuls of peat moss sprinkled around the original plants didn't quite cut it?

Here's my new plan.  Take out the raspberry hedge and move the blueberries into their spot -- with plenty of acidifying soil amendments.  I can't betray the man who built the support structure though, that guy who loves the raspberries, so I have dug up 8 raspberry canes and put them into pots. 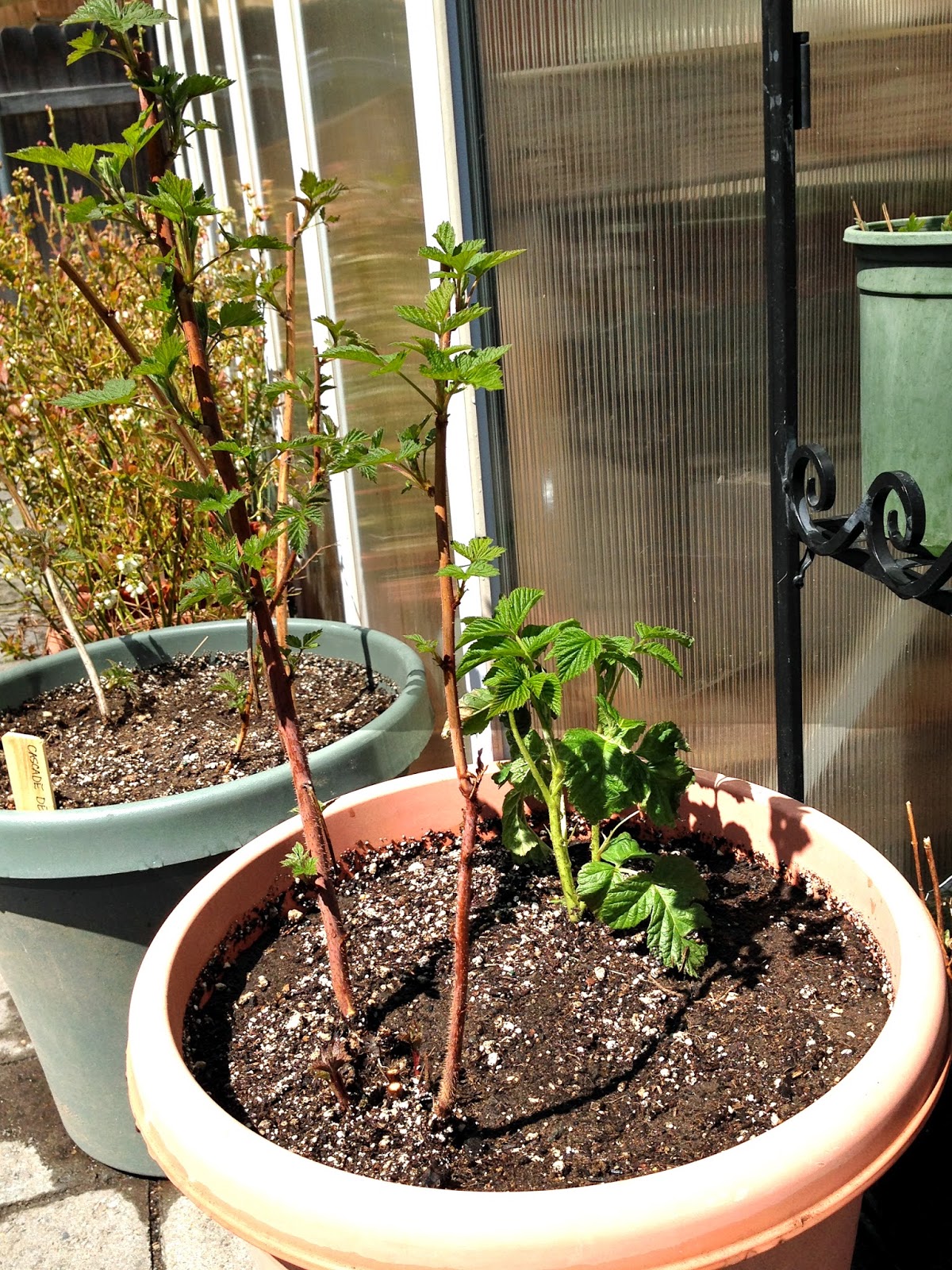 We'll see how they do.   Maybe by the time they are huge and out of control I will have figured out someplace else in the yard to plant them.   The sweetheart will have his raspberries and I will have a blueberry bonanza, with a handy wooden and wire structure to hang bird netting from at harvest time.   I call that win-win.

The morning stroll also took me inside the greenhouse, where I found this 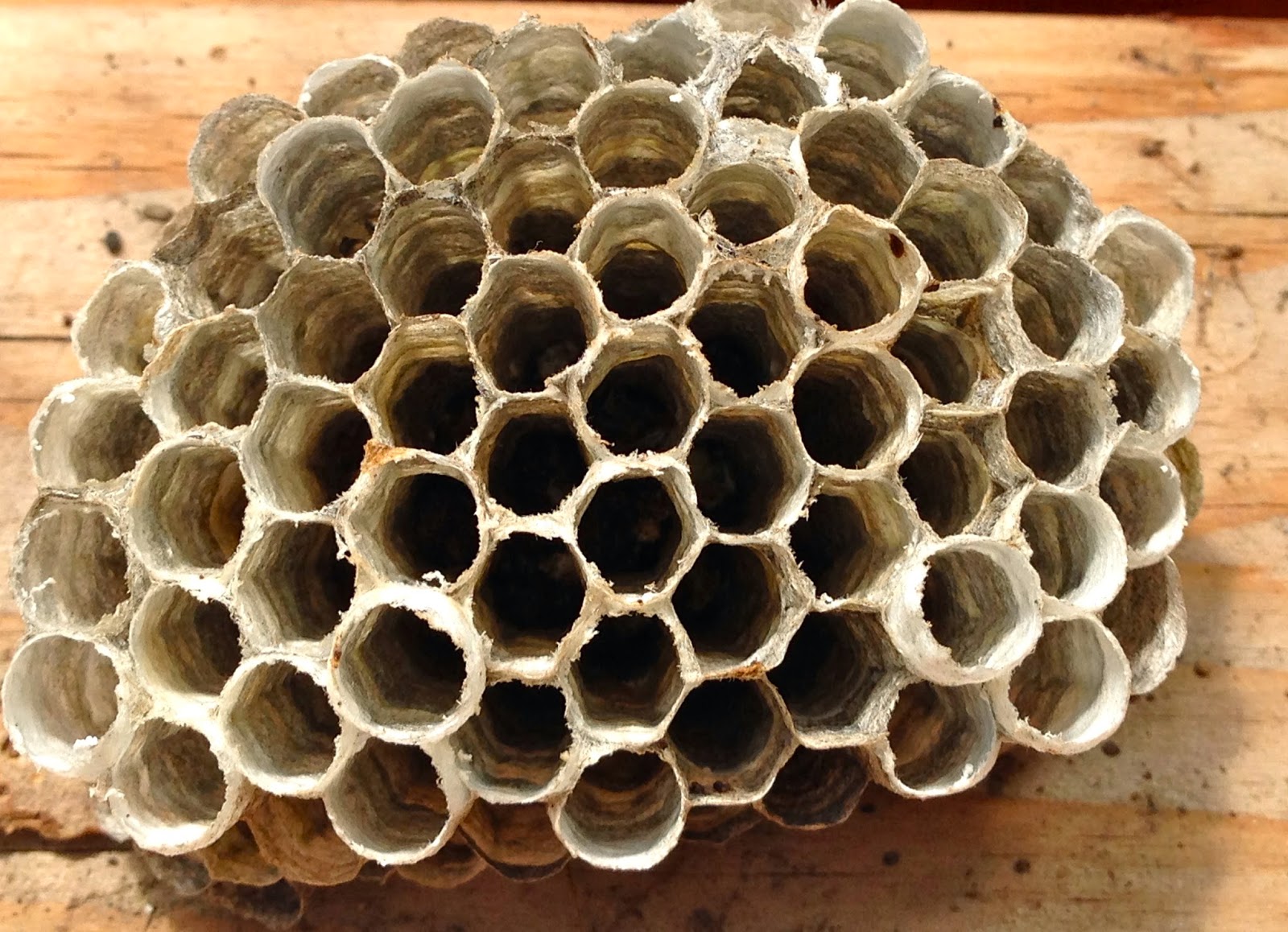 sitting on a potting bench, where it had fallen from the greenhouse roof.   Empty, obviously, left over from last year.   These clever structures are the creations of paper wasps that find the protection of the greenhouse the perfect place to raise their young.   These guys, or rather, ladies, are quite mild-mannered, and so I don't sweep them down unless they are close to the door or other busy spot. 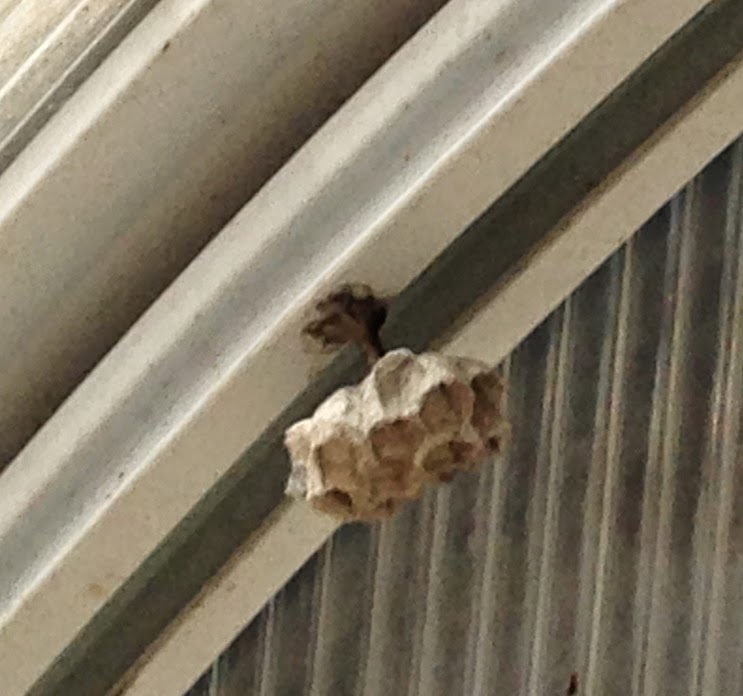 and just last week I saw several new nests going up in different corners of the greenhouse.   Now there is only this 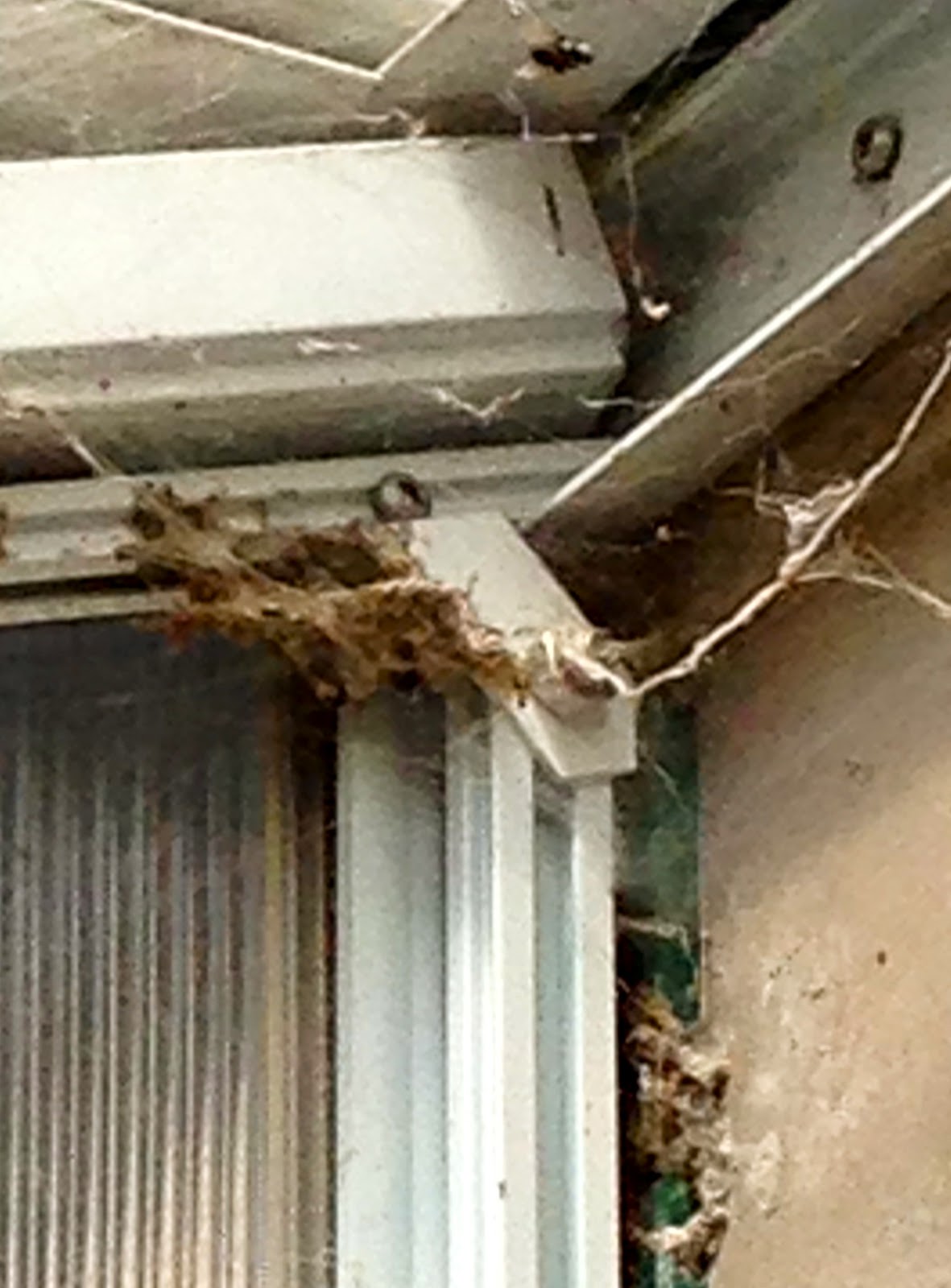 and the fallen giant in the earlier photo.   Where did they go?   Aha -- Several times in the last few days I have startled birds that were hanging around inside the greenhouse.   I suspect they have been feasting on wasps and dismantling the nascent nests.    No need to worry about being stung this year.   Now perhaps I should get the broom and clear away the cobwebs?