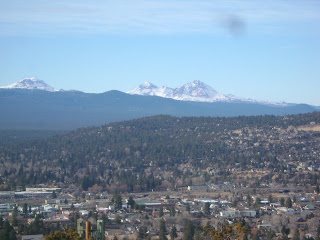 February 1. Time to make those new year's resolutions. What? I'm a month late? Not so. I will admit that everything in my life has been late, the last couple of months, starting with winter.

Winter? What winter? has been the topic of conversation around town since hopes of an early ski season died a-borning, right after Thanksgiving. After a promising skiff of snow in mid-November, we had no precipitation of any kind until the last few days of December, when it ...... rained .03" on the 28th. Pitiful. At least it saved December 2011 from being the driest December on record.

In December 1976, the infamous 'drought year', there was no measurable precipitation at all. That was the year we hiked into Chambers Lakes (7000 feet elevation, in the saddle between the peaks of South Sister and Middle Sister in the central Cascades on my sweetheart's birthday, December 21. Bare ground at 7000 feet in midwinter is unheard of in this latitude. The ground wasn't even frozen. I dug a couple of tiny wild huckleberry bushes for my garden. Shhh, don't tell anyone.

Finally, two weeks ago, on January 16 -- we got a real winter snow dump. Good thing too, as I was getting tired of watering my garden -- dealing with frozen hoses only adds injury to insult (we can talk about the evil agenda of hoses another time). The storm seemed to have caught everyone unawares. Schools were closed. The college was closed. Even Mt. Bachelor, our local ski area, closed. 72" of snow in 72 hours was just too much for even their snow removal equipment.

The chickens, as usual were unimpressed. I thought their new play yard looked quite festive in the snow. 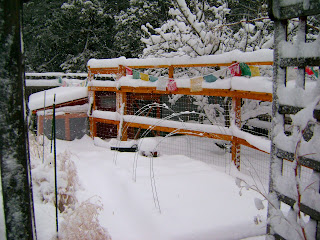 The new girls were suitably shocked. 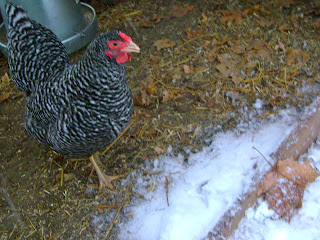 but a few tasty treats soon lured them all out for breakfast al fresco. 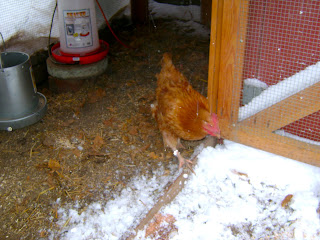 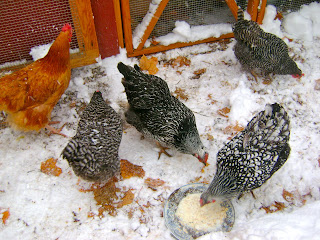 Alas, the new solar panels are not really operational after snowfall. 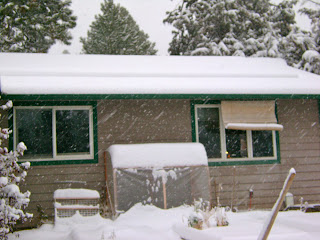 Now here it is, Feb 1 and it still feels like early November. But for us gardeners, it's time for new year's resolutions. Personally, I don't much bother with the usual January 1 kind of resolutions. 'New Year's Day' is a fairly meaningless thing in the real (natural world). A change of one digit in the year but nothing tangible to hang one's hat on. No wonder most 'New Year's Resolutions' go flop within a week or two.

I prefer to hang my resolutions onto something more tangible, or at least visible in my garden. Feb 1 is very close to that magical day (Feb 4 this year) when we hit 10 hours of daylength -- the point halfway between Winter Solstice and Spring Equinox, traditionally considered the first day of spring. This is the time when plants resume active growth. Hardy greens like kale, mache and claytonia, which can sit dormant all winter in sheltered places around the yard, or huddled up in the cold frame, begin first spring growth about now. Depending on weather and temperature, we can start eating the earliest greens from the cold frame sometime in late February, and few weeks later from the open garden.

Admittedly, this (non)winter has been weird even with plant growth. Some of my earliest shade-loving perennials -- pulmonaria and hardy ferns -- sprouted and began showing new leaves in late December. On Christmas Eve I threw some old kale seed into the cold frame, and within a couple of weeks that was sprouting too. 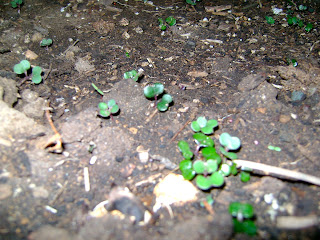 Who knows what 'spring' will bring. Last year we had cold, snowy, frosty weather until nearly the end of June. Tomato plants that went in in mid-month sat there shivering for weeks as the longest days of the year passed by. Then, suddenly, as if waking from a dream, the weather seemed to straighten up, shake its head, and stand up, casting off the cold like an old coat, and begin blasting out heat and intense midsummer sunlight on every bedraggled seedling in the yard. I had sunburn on my tomatoes -- a first for me.

But that's a worry for the future. For now, I will take a good look at last year's garden journal notes, draw up my first seed orders, and get started on those resolutions. For now? 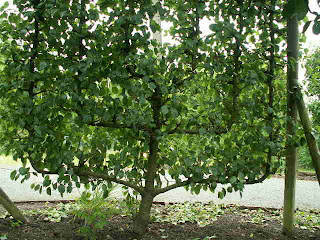 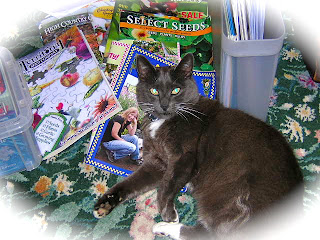 Hint: these are my standard resolutions for every year. Wish me luck.

Oh, and one more: