Yesterday morning I walked out to the back patio and saw this ....... 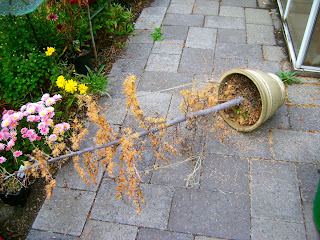 But the next thing I saw was this sad sight, previously a lush pot of sweet potato vines .... 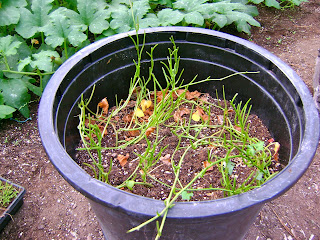 and suddenly I knew the Neighborhood Doom had fallen on my garden.
Further evidence?
Munched squash vine leaves: 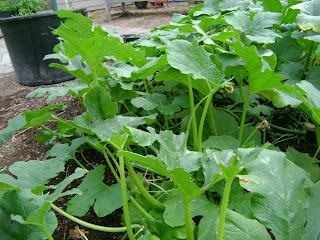 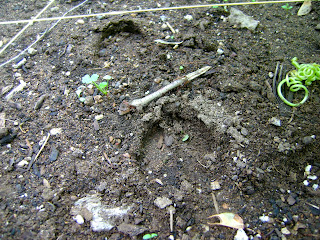 The culprit? A fine large specimen of the local creature I have named Bambiciferus horribilis, but which I more commonly (and rudely) refer to as F...... Bambi. (Feel free to add your own favorite Anglo-Saxon swear words to my own.)

Thanks to the idiot woman up the street who feeds the damned things, we have a fat, happy, herd of deer roaming the neighborhood, alternating her regular rations of 'deer-chow' from the feed store with the tastiest and most beautiful plants in her neighbors' gardens. I have made myself (mostly) immune to their depredations by building a tall fence around my entire back yard. However, there is one gap in the barrier: the open-ended carport separating our house and the garage/MIL apartment, which leads directly into our backyard, where I grow my tender and tasty garden crops, as well as flowers. Roses. Perennials. Fruit trees.

Most of the time the MIL's car is parked in the middle of the gap, and that is enough to deter deer. But every now and then, in late summer or early fall, when native browse is presumably dried up or simply not as alluring as the lush greenery in well-watered gardens, one or more bold baddies will thread the needle between car and house and make its evil-intended way back to my little Eden.

Don't try and tell me the deer were here first. In terms of the literal truth, no, I was here first. I have been gardening in this very spot for far longer than any of these deers' little deerish lifetimes, or their ancestors', back at least 20 generations. Besides, they wouldn't be hanging around the 'hood in the first place if people like my *%$#@!%# neighbor (possibly a perfectly nice woman in other ways, I haven't met her) hadn't started encouraging them to abandon their native fare.

'Deer chow' is apparently bad for deer anyway. Deer, like cows, are ruminants though they are browsers (designed to eat shrubby twigs, leaves, bark, etc) rather than grazers (designed to eat grasses and more tender green plant matter). Deer chow contains grains, seeds and sweeteners such as molasses, none of which are digested well by ruminants. Just as cattle fed on corn and other grains are basically sickened by such a diet (thus the quest by health-conscious eaters for 'grass-fed-only beef'), so are deer. And, when deer eat this highly addictive 'food', not only does it replace their normal diet, but it also disrupts their bodies' natural enzyme production so they may not be able to digest their natural winter diet later on. Grrrr. Feeding the deer is bad for the deer AND bad for the neighbors -- so why do it? Don't get me started.

Oh. I already am started. So I'll leave off my ranting and cut to the chase. Namely, my first attempt at a cure: 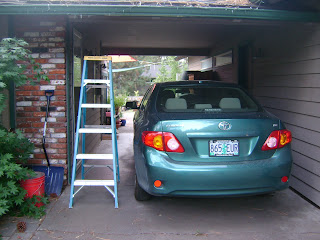 So far, no deer has been able to scale this ladder. I'll keep you posted.
Posted by Unknown at 9:45 AM