You just never know when higher education will come in handy.

40+ years ago, when I suffered through (squeaked through) my required Economics 101 class, freshman year in college, I would have sworn I was acquiring absolutely no concrete knowledge or understanding of the subject at hand. I was left with the impression that 'economics' was basically voodoo -- which, come to think of it, seems to have been proven right, the past few years. And I also first heard the phrase: 'laissez faire' -- which, being French, sounded quite important and elegant, if somewhat suspect as an economic system, if I remember correctly.

When I graduated, I thought I was leaving 'higher' education behind. But no. I was only letting go of a few rulebooks, and starting a life of 'trying it out in the real world' -- in both my work and in my newly awakened passion for gardening. For many years I ruefully thought of myself as a 'laissez faire' (defined as 'fairly lazy') gardener, as I attempted to keep to a certain standard of planning and order in my garden. I read a LOT of how-to books, and sought to emulate the energetic, well-organized work of their authors. I rarely succeeded. Too lazy!

Or so I thought. What I can now appreciate is that in truth what I have learned, through a combination of procrastination, inspiration, confusion, intuition, stupidity, dumb luck, and sheer gardenerly laziness, er.... I mean brilliance, is that nature is The Dude of balance, order and 'economic systems' in the green, growing world. All I have to do is listen some, plan some, do some minimum input, then stand back and admire.

Recently I thought to look up the actual definition of 'laissez faire' and found that it literally means 'to allow to do.' By mid-summer, this approach leads to waist-high weeds. But in early spring, when the silly snows and frosty days prevent much active gardening, my 'allowing Nature to do' produces a lovely early harvest. 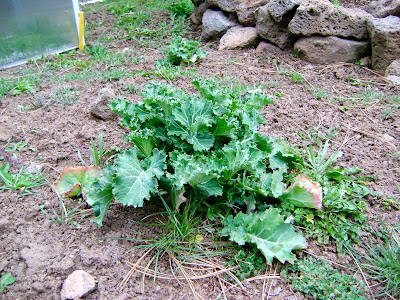 A hippie friend introduced me to kale 30 years ago or so and I have grown it in my garden ever since. It is probably my favorite vegetable of all time. Lately I see it trumpeted as high in calcium and of course all the other green veggie benefits. Here's what I love about it, besides all that: once you grow it, you never have to plant it again. This plant is a volunteer, one of many dozens that sprout each spring in my messy garden. I pull most of the sprouts as I prepare my beds for planting other things. But I leave the ones that aren't in the way, like this one, and come springtime, they feed us wonderful greens and eventually, sweet, delicious flowerbuds for a couple of months before anything else is edible.

Last year I dug up several plants in midsummer and crammed them together into a small bed, which I later covered with a small, portable cold frame. To use another excellent French word: voila! They stayed green and yummy all winter and currently they are bursting forth with new growth as the days grow longer. I will (accidentally) allow a few plants to go to seed this year, and the cycle will continue indefinitely. I also have several kinds of Chinese greens that self-sow around the garden.

Here's a volunteer that makes me laugh every time I see it: 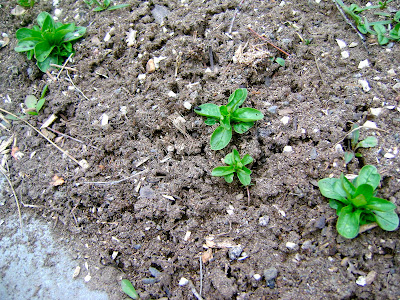 Although Bend is a pretty happenin' place as far as foodiness goes, it wasn't until about 10 years ago that a server in a fine restaurant proudly presented me with a plate of these 'weeds', braised to a fine turn and nestled up to some fancy-schmancy French lamb dish. I say 'weeds' because I recognized a pesky little annual that had mysteriously turned up in my garden a few years before, and which I had never been able to identify from 'Weeds of the West' or any other resource. "What is THIS?!" I asked the server and learned that it was --- ta da --- a Gourmet Vegetable known in France as 'mache' and elsewhere as 'corn salad'.

Hmm. I could have sworn I planted mache in my garden years ago, but it never came up. Or so I thought. Laissez faire strikes again? The instructions for planting mache had all stressed the need to plant it very early, while the soil was still quite cool. Apparently I had planted it too late, and those dear little seeds had just hung out, through a whole summer and fall, and come up obligingly the following spring --- but by then I had forgotten all about them and didn't recognize them. Stupidly, I had been pulling them up as weeds. I had even made a flower essence from them, labeled 'tiny white-flowered mystery plant'. hahahahaha

Nowadays I am a big mache fan -- it really does start growing very early, and is the mildest-flavored green out there. Another early early green I grow is claytonia, better known to Western wildflower lovers as 'miners' lettuce'. Also very mild-tasting, with sweet, yummy wee flowers coming up through the center of each leaf. 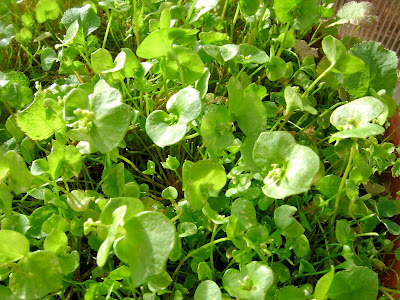 Another laissez faire trick I have stumbled upon is allowing the garden to tell me when to plant certain crops. For instance, peas are a tricky thing to grow in our climate. Plant too early, ie when most garden books advise (St. Patrick's Day) and they often rot. Plant too late, ie in mid May (when the local Extension Service advises) and they tend to get blasted by an early heat wave and fizzle out in an explosion of mildew without producing much.

So I keep a close eye on last year's pea patch as I wander through the early spring garden, and when I see this: 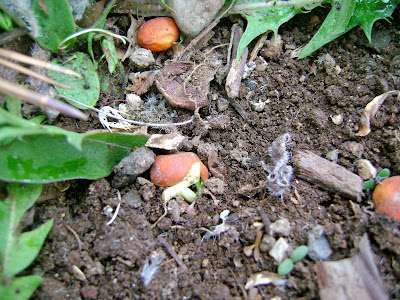 I get out my seed packets and plant.

This is an old variety of purple-podded drying peas, called 'Blauwshokkers' in Dutch, which I have grown for several years. No matter how carefully I pick, I always miss a few pods, and they happily hang until dry and then launch themselves into the surrounding soil in expectation of spring. So every year I have this handy 'pea clock' waiting for me in early April. This year, in a fit of scientific alertness, I have noted that the first dandelion blossoms are just now appearing, in synch with these pea sprouts. There is a nice scientific word for this, which I forget -- for timing the planting of certain crops based on simultaneous events. Like, 'when the first robin arrives, plant spinach' or 'when the lilac leaves are the size of a mouse's ear, plant carrots' etc. One of the benefits of living and gardening in the same spot for many years is that one can make up a version of this kind of botanical/zoological clock that is exactly tailored to the garden.