Most people I know, gardeners included, tend to think of March 20/21 -- the Vernal Equinox -- as the 'first day of spring', just as June 20/21 is thought of as the first day of summer, and so on. We gardeners, at least, should know better. Especially for those of us who live in a climate where 'spring' is of necessity a rather elastic term for the several months of .... varied .... weather leading up to summer, a keener eye set to subtler signals than a mere calendar date are needed to track the seasonal changes.

When I started gardening, I certainly thought in these more traditional terms. I read books and made my plans and charts based on what I gleaned from their pages, not having had any personal experience of gardening as a child, other than eating what my mother grew in the back yard. The urge to start gardening hit me quite suddenly and unexpectedly, just a couple of months after getting married. I was going through some of my parents' old books that summer and found my mother's copy of the Sunset Western Garden Book, probably the 1933 edition. Like lightning, I was struck with the nesting urge and proceeded to draw up the first of the possibly hundreds of garden plans/seed lists/planting schedules that have filled my garden journals in the nearly 40 years since.

For the record, said 'nesting urge' resulted in no human children, but I have had plant babies in abundance. Here's a photo I sent to my grandmother (Arabella, this blog's namesake) entitled 'your first great-granchild and me' in January 1974. 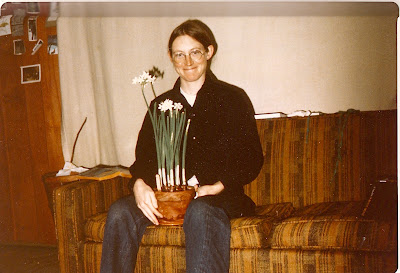 I was as proud as any parent of my darlings, which I always thought of as my children. Many early photos of me in the garden show me in similar embrace -- with tomato seedlings, fondling my first ear of corn, hugging a sprig of apple blossoms. My poor sweetheart soon became resigned to being dragged out in freezing cold or rain to gaze upon a field of freshly dug soil, then pulled along, foot by foot, to admire 'this will be carrots ...... over here will be onions ...... this is where the tomatoes will go next month ....'

As the years have passed, if I have shown no signs of waning enthusiasm for gardening, I have at least stopped pestering him like this. Well, not often. Now I take my wee digital camera out, point, shoot and pester YOU, dear readers, with such shots! Hahaha 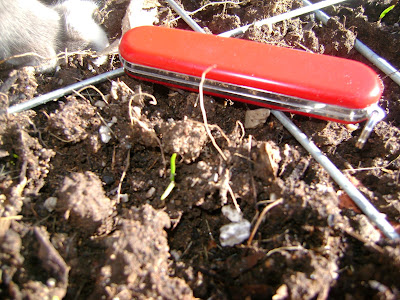 The photo shows a wee, wee spinach seedling, just popping up in the garlic bed a couple of days ago. On a whim I had thrown some spinach seed in an empty space at the end of the bed, after planting the garlic and shallots last fall. Being either lazy or wise, I have learned that the easiest way to gauge planting dates for early vegs like spinach, peas and hardy greens, is to pay attention to when overwintered volunteers germinate on their own, and then plant more ASAP. Here's the result: 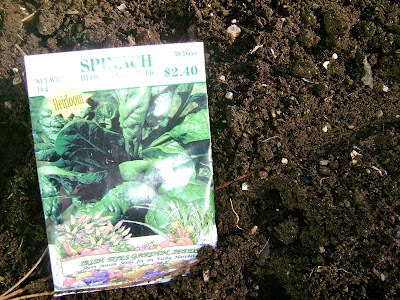 If this first sowing freezes or rots, it doesn't matter. It's certainly not taking the place of anything else, at this time of year. I never seem to plant spinach early enough, so maybe this year I will be lucky.

The point is, for me, and in my garden and climate, the old tradition of honoring the four other seasonal markers -- the so-called Cross-Quarter days, or Celtic Fire Festivals -- makes more sense as a garden planning device than the more obvious and well-noted Equinoxes and Solstices. Imbolc, the first festival of the ancient year, was celebrated at the point halfway between Winter Solstice and Vernal Equinox, on February 4 or 5. I have heard this described in other traditions as the time when 'the back of Old Man Winter is broken.' Modern American pop culture has trivialized this as 'Groundhog Day' but ignoring this silly, shallow media non-event, I am reminded to stop my winter dreaming and get on with serious garden planning for the new season just ahead.

Sure, we will have months (and months and months -- sigh) more of cold weather. But starting in late January/early February, we and the plants notice lengthening days. In the greenhouse, I begin fertilizing the wintered-over flower pots -- geraniums and other stalwarts -- and begin to take an interest in what might be sprouting out in the garden..... 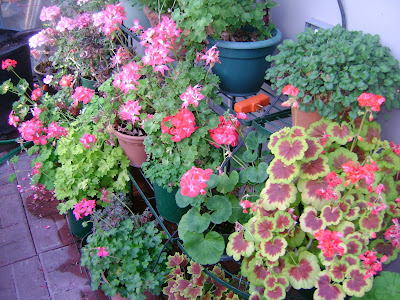