or, there's no need to panic just because I loaned my favorite seed catalogs to a friend, and am now going through withdrawal .......

When I first started gardening, at the tender age of 21, I was pretty much on my own for inspiration and information. No internet, no knowledgeable neighbors; just my mother (300 miles away and in a vastly different climate zone) and the garden books I found at the library. At the time I lived in a mild-winter area (northern California coast) and could pretty much plant year-round. I killed lots of plants and murdered a lot of seeds in my first stumbling efforts but had fun anyway. With the wisdom of hindsight, I can say that beginning gardeners should just plan on this happening, no matter where they live.

A few years later when we moved to Central Oregon, things got a bit dicier. The neighbors all said, 'you can't grow anything here' but I ignored them and planted anyway. A lot of things died as the local axiom 'frost is possible any day of the year' proved to be true. Blackened squash and bean vines in July -- oh my!

But I was determined and found a few resources for encouragement: legendary local OSU Extension Service agent, Marvin Young (with his list of vegetables that would indeed grow here), and a wizard gardening friend or two who astounded the community with beautiful perennial flower and vegetable gardens in the face of the common wisdom against such bountiful potential.

The only local source of seeds was the occasional rack in the hardware store, and there wasn't much of a selection, nor were most of the varieties particularly well-suited to our crazy climate. I became a seed catalog junkie, welcoming into my home the standard Burpee and Park seed companies back when they were still smallish and family-owned, along with a growing crowd of newcomers and new-to-me oldtimers: Johnny's, Nichols, Gurney's, Stokes..... I was soon able to turn up my nose at the pitiful local offerings, and order varieties that showed actual promise of surviving our short growing season. With the birth of the heritage seed movement, options expanded again: Seed Savers' Exchange, Seeds Trust (then High Altitude Gardens), and many more. Now there is an embarrassment of riches in the seed catalog world.

Early in December, I looked forward to the catalogs, which began to show up in my mailbox right after Christmas. They come earlier now, but I still feel a tingle of anticipation when the first one arrives. In my early garden journals, I noted the date of the first entry in what I thought of as the Seed Catalog Sweepstakes. I'm a bit more blase nowadays, but I still love to see them piling up on the shelf, awaiting the day I have time to sit down and start making lists of things I need. Want. Lust after. Whatever.

Luckily, I have help in sorting it all out. 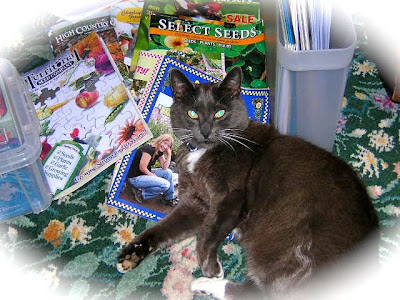