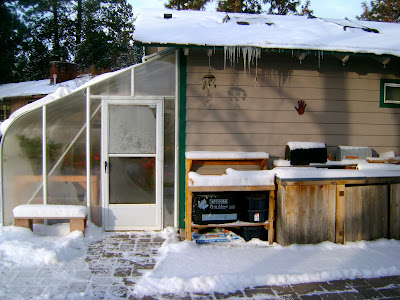 Can you tell by looking at this photo that the temperature outside is 0 degrees F? When I woke up yesterday morning, as per usual I quickly checked the indoor (in the greenhouse)/outdoor (in the carport outside it) thermometer and was shocked to see a reading of 30 degree INSIDE the greenhouse. Uh oh. And this was at 4:30 am, so the temps were still going down.

Although technically an 'unheated' greenhouse ie I don't keep it warm enough to grow orchids, I do keep a small space heater in it in the winter, hooked to a thermostat which is set at around 38 degrees. Since the greenhouse is attached to the MIL apartment's south-facing wall, it normally stays well above freezing most of the winter, even without auxiliary heat. I overwinter my geraniums and a few other tender perennials in containers, on a tiered stand right next to the wall. Other plants that will take light frost -- cymbidium orchids, a California ceanothus, potted maple and larch 'bonsai' -- are out farther from the building, next to the outside walls.

But every 2-3 years it gets really cold here, and then that heater is Life to the plants inside. Years ago I discovered that leaving a small fan on, 24/7, keeps cold (in winter) and hot (in summer) pockets from forming, and works amazingly well to keep things from freezing, even when the outside temperature is in the 'teens. But below 10 or so, that wee heater is necessary to keep things alive.

So I rushed out to see what was happening, and could see that, although Herbie (the 20 (30?) year-old oil-filled radiant heater) was working valiantly, he just couldn't put out enough BTUs. I grabbed the spare space heater -- one of those cheap, stand-up, oscillating ones and tried to plug it in. And promptly blew the fuse powering the fan and light. S---! Now it was 30/0 degrees and dark, and I was still fumbling to plug in the second heater. The electricians who put in this electrical plug carefully covered it with a 'waterproof' metal sheath, which alas, makes it nearly impossible to get actual electrical cords plugged in. I'm still in my nightgown at this point, not feeling the cold in my worry about my darlings, but I ran inside to enlist my manly guy for advice and assistance. He, still in his bathrobe peacefully reading by the fire, protested at first. But nobly (and this is why we are still married and madly in love after 40 years) he got up, put some proper clothes on, and came out to help.

Each of us was hampered by a different problem. After watching years of sci fi movies and shows, he claims to have become quite expert on advanced technology of all kinds. Unfortunately, since we are not on Battlestar Galactica, the Enterprise, or moving through the Stargate universe, most of what he has learned is useless. A Level Three Diagnostic did not help. The forward naselles could not be located. The inertial dampeners were offline. He was left with only a flashlight and a simple electrical cord to save the day.

I suffer from a different handicap. Despite being 60 years old, and having lived my entire life (bar a great deal camping, backpacking, and living in various cabins, Forest Service guard stations and the infamous 2 years in the pink trailer) using electricity, I still don't really ... get it. It seems unnatural and probably highly dangerous to me. In fact, I am the spiritual descendant of James Thurber's grandmother, who ....

"lived the latter years of her life in the horrible suspicion that electricity was dripping invisibly all over the house. it leaked, she contended, out of empty sockets if the wall switch had been left on. She would go around screwing in bulbs, and if they lighted up she would hastily and fearfully turn off the wall switch and go back to her (magazine), happy in the satisfaction that she had stopped not only a costly but a dangerous leakage. Nothing could clear this up for her." 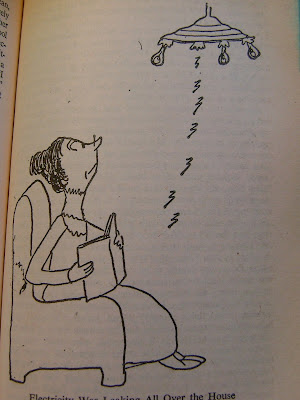 This explains why I still have the uneasy feeling, whenever I plug something in, that I will be electrocuted. And fishing around in the (cold) dark bowels of the greenhouse, where there could also be huge, hideous spiders, trying to jam the 2nd heater into the plug, gives me the willies. Although I suppose the spiders have probably packed their wee spidey suitcases long since and headed south for the winter.

Anyway, the plug went in, and thankfully, that circuit did not blow. The extra heater did the trick, and the oscillating motion fills the need to circulate air. Nothing froze and this morning, despite the temperature having fallen to (so far) -7 outside, it's a balmy 38 in there. My darlings are safe.
Posted by Unknown at 5:39 AM