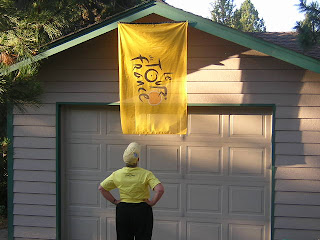 Every year when the first Saturday in July rolls around, our house turns yellow. The flag goes up, and the daily schedule shifts into race mode. For the next 3 weeks, we follow the Tour de France, the world's greatest bicycle race and the most widely-watched sporting event in the world, live. For those of us living on the West Coast, this means settling into place in our official Tour de France sofa at 5:30 am PDT, most days. The mountain stages require a bit more commitment, as coverage begins anywhere from 3:30 to 4:30 am. But don't ever doubt it: we'll be there.

It's only been since 2002 that we've been able to watch the race live, from home. That was the year we joined the modern world and got a satellite dish, solely to watch bike racing. This was a vast improvement over previous years, when we had to rely on friends to tape a few key stages for us, which we then had to watch long after the results were known -- and even this coverage was still new to the US. There was no tv coverage of any kind of professional bike racing until the mid-1980's. Americans have been painfully slow to recognize any sport that don't involve either a ball of some kind, or motor vehicles.

This year the race happens to begin on U.S. Independence Day. This means we've had to combine race viewing with pie-making, a happy union as it turned out. Manly Pie Man created his usual splendid dessert offering for the annual shop barbecue, and Lil Ned did the decor, perhaps my most glorious creation yet. 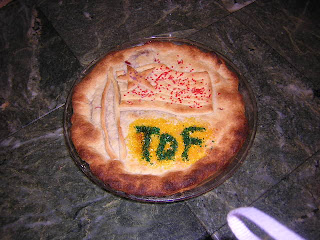 But this July is doubly yellow. July also includes the first annual Bend Piano Monster Concert, and the t-shirts are ..................... yellow! Can it be a coincidence? No way around it. July is YELLOW! 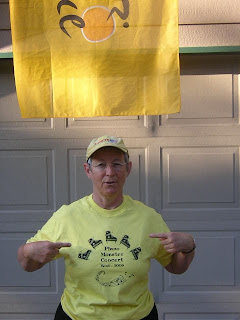