The Gentle Art of Bettying 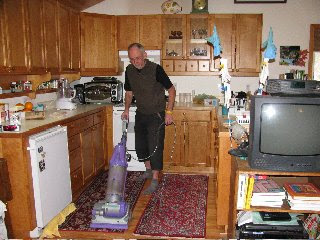 You won't find 'bettying' in any dictionary, but it is a splendidly useful and evocative word all the same. What started out as a family joke in the early 1970's has spread throughout the land to friends and family far and near. At the time I was newly married, and my younger sister was apparently having a hard time imagining me being anything as serious as a 'proper wife'. (That was well spotted; alas, I've never been very proper.)

But somehow 'Betty Housewife' stuck and as the years went on, 'betty' became more and more versatile. The 'housewife' part was dropped early on, and we now have a nearly universal root word that can serve as:

It also serves as an honorific, and as such is not limited to the female gender. Anyone can be a betty, if doing something bettistic. Thus we have Betty Pam, Betty Kathy, and Betty Jan, but also Betty Chuck, Betty Dave, and so on.

In our use of the word, we define 'bettying' as any of the traditional housework-type activities formerly considered the sole domain of The Wife, such as washing dishes, dusting, cleaning the silver, doing laundry, etc.

Not everyone is a betty, though most people pick up a modest number of bettying skills over time. And even the most hardcore betties have their slack times, when the paper piles, dust bunnies and unscoured bathroom sinks mount up. In fact, people who truly CARE about housework are probably not betties, either. Thus people whose floors are 'clean enough to eat off of' are not betties. They are in some other category I'll never know about.

And so in the above photo I bring you a true gentleman, a prime example of the best kind of betty: my sweetheart. Bettying, yes, but not just anyplace. He is vacuuming his MOTHER's place. Betty Son? Is this man a jewel, or what?
Posted by Unknown at 10:50 AM