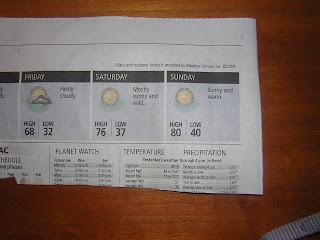 Bendites are a funny lot. Ask your average Bendonian, especially any of the 8 gazillion residents of 10 years or less, why they moved here, and they will say 'because of the weather'. On hearing this, you might be thinking, "wow, that's shallow". Consider also, that the local tourist-enhancement industry touts our fair city as having 360 sunny days a year.

Global warming notwithstanding, I think this is a bit of an overstatement. For instance, they probably counted yesterday as 'sunny' because the sun came out from behind the snow/hail/rain clouds for about an hour in the middle of the afternoon, thoughtfully melting the snow that had just fallen over the previous 15 minutes.

Still, we do get a lot more sunshine than the more populated, western third of the state, which gives Oregon its reputation as very green (as well as Green). Not here, baby. It's sagebrush and dry, sandy soil, and other than the odd thunderstorm, we rarely get actual rain.

So I've always been a bit puzzled by the nearly constant complaining I hear about the weather. In the midst of our glorious Indian Summer of September and October, local skiers start complaining because there's no snow. Our local ski area, Mt. Bachelor, closes down in April because of lack of interest, although we often have snow through June. By then everyone wants to play golf or ride their bike or go fishing.

Oddest of all, for a desert (less than 10" precip annually) where any kind of garden, lawn, or non-native landscaping requires irrigation from, minimally, May through September, even the lightest sprinkling of rain causes consternation and grumbling among Bendix of every stripe.

Me, I'm a gardener. I'm thrilled when it rains. And, despite yesterday's carping about the cold, I'm pretty philosophical about the weather. Still, a look ahead to the predicted weekend temps would make any of us somewhat schizoid. And that's a good reminder for us all, that's it's good to be flexible when living in a place named 'Bend'.
Posted by Unknown at 12:07 PM