I See Your Owl, and Raise You an Eagle

I think the people who write headlines for newspapers have the funnest job going.   Imagine the glee with which the headline writer for our local Bend paper, The Bulletin, created the above line.

In the same issue that saw a full-page article with photos about our newest wildlife icon, 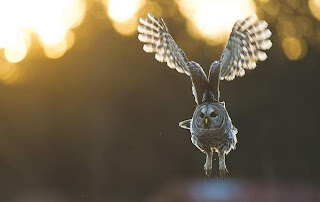 the barred owl that has recently taken up residence in a busy Bend river park, we were treated to the above headline 'I See Your Owl, and Raise You an Eagle' and the photo below: 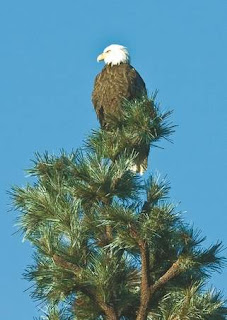 This is a bit of an insider joke for locals.  It is a real eagle, for sure, but the tall 'pine tree' it is perched on is a fake.  It is actually a 75-foot AT&T cell tower disguised as a pine tree to better blend in with the surrounding forest, just outside the city limits.  Some might describe it as an extremely tall artificial Christmas tree.   It's not a bad fake, and would be even more inconspicuous if it were planted in the middle of a forest.   This one stands apart from other trees, and although at first glance it could be mistaken for the real thing, a longer, second look makes it obvious it is faux.

Apparently this is the coming thing for cell towers in scenic and/or populated open areas.   Here's one made by the Nello Company of West Bend, Indiana, which calls them 'monopines'. 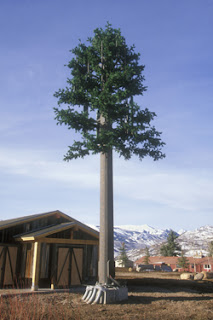 Here is another being assembled: 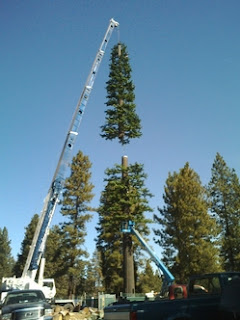