Perhaps at some point I will go back and update the chicken saga of the past 6 months. For now, let me introduce Maisie, one of The Nuggets, two young pullets I bought at a poultry swap in June to fill out my newly-reduced flock. 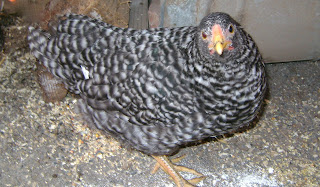 I brought Maisie (a Dominique) and her 'cousin', Sylvia (a Dominique/Blue Orpington cross) home together,

and they have been growing and settling in with the older girls fairly well. Both have just begun laying, and we have had the usual run of tiny, weird-shaped, bumpy 'pullet eggs' that all chickens produce while their newly-matured laying mechanism sorts itself out.

Four days ago, I noticed that Maisie seemed to be standing off by herself and was unusually quiet and uninterested in food. I didn't take too much notice because I was super busy and didn't get back out to check on her until I went out to put the girls away for the night, just before dark. Hmmmm, Maisie was definitely looking droopy, and she had some kind of yellow goo coming out of her vent. I had seen it that morning, but in the early light had mistaken it for wood shavings, which lines the nestboxes and sometimes sticks to the girls' bloomers after they've been on the nest. This was definitely goo. Goo is not good.

I went inside and read my 2 chicken books, looked at a couple of online chicken forums, and concluded she was probably eggbound. Sounds bad and it is bad. Apparently when a young pullet starts laying, sometimes the startup mechanism goes awry, and an egg is formed without a shell, or too brittle a shell, and the egg breaks inside the oviduct and gets stuck. If you are thinking, 'ow! ow! ow!' you are probably on the right track. And, since the chicken uses the same passageway (cloaca, aka the vent) for eggs and manure, this means an egg blocking the way also blocks pooping. And if you can't poop, you die.

When I was gearing up to get my first chickens, I read everything I could get my hands on about raising chickens. And although I read about what to do for various ailments, accidents and diseases they could get, I blithely assumed MY chickens would never get sick or have such gross problems.

But now my Maisie girl was in a bad way and none of my local chicken contacts was available. The main chicken guy at the feed store basically said, 'well, it's a chicken, it will either live or die. I don't know of anything you can do for that.' Yeah, yeah, I know, it's a farm animal, but ......... these are my girls and I'm willing to take more time and care than your average farmer with a flock of 200 hens.

Following the advice from my favorite chicken blogger, I took Maisie out of the coop and proceeded to a) give her a sort of sitz bath in warm water and epsom salts and b) dose her with olive oil -- in hopes of both getting things moving inside by relaxing the rear end and lubricating the front end. Good thing she didn't feel on top of her game -- the olive oil was pretty challenging even with her in an unusually subdued condition. We were both wet and well oiled when I was done.

Then I brought her into the back porch greenhouse and let her dry out under a warm plant light. She seemed only slightly better by bedtime, but I could hear little 'perking' noises coming from her gut. I worried about her and dreamed about her all night long.

Next morning (yesterday) she was the same, and I was getting pretty worried. This was the third day of her travail, and eggs come along on about a 24-26 hour cycle, so there should have been at least 2 eggs coming down the pike by then. I sat down with my flower essences and did a long session for all her symptoms. I emailed my long-distance energy healing group and asked for their assistance. By mid afternoon still no change. I moved her to a larger container, and changed her water, putting epsom salts in it as per my blog expert.

Soon after that she began pooping a little, with lots of water. (Graphic content, beware). Then, after I had started to give up all hope, about 7:30 last night, I went out to check on her and hooray! She had passed TWO eggs -- one, obviously the problem egg, was broken -- no wonder it had stuck. Oweeee. The second one, coming along behind, was complete, but had only a small amount of shell around it. 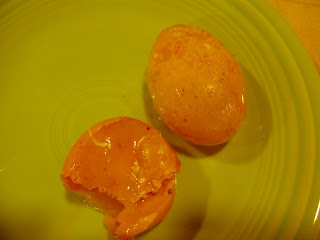 She was all perked up and eating like the famished hen she was. Here she is, head up and ready to party. 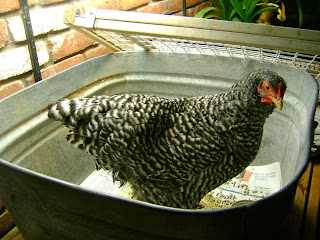 Today I put her back with the flock and she is a bit embarrassed by her still-goopy bum feathers, but otherwise seems normal. She is spending a lot of time on the inside roost, preening, and hiding from the other girls. In typical chicken fashion, they seem to have forgotten she belongs to the flock and have been whomping on her as an outsider. Pecking order is supreme! Even her former best pal, Sylvia, is whomping on her. I hope things mellow out, for her sake. She is probably the lowest hen on the pecking ladder, and it wasn't the best thing that she was the one to be gone for a couple of days.

But I am so relieved that things worked out -- and am feeling slightly proud that my first bumbling, amateur attempts at chicken doctoring worked out so well.
Posted by Unknown at 1:39 PM