I had seen them, the young quail couple, cruising the neighborhood for a couple of weeks, looking for a good nest spot. Mr. Quail went first, leading the way to first one prospective site, and then another, with Mrs. Quail following unenthusiastically. I kept imagining this conversation:

Mr Q: Right over here. I think you'll love it.
Mrs. Q: Hmph, so far I've seen nothing I like.
Mr Q: OK, here it is. What do you think?
Mrs. Q: No way. Forget it. You'll have to do better than that.
Mr. Q (undaunted): Well, ok, but I have another one over this way.
Mrs. Q (lagging behind and looking increasingly skeptical): Right. Well, let's see it.
Mr. Q: Nice, eh?
Mrs. Q: Uh uh. Forget it. Listen honey, time is running out. We've got to find a home, and soon.

This went on for days and days, but eventually they disappeared, and I figured they had finally found the perfect nest spot. I wondered where it was.

This morning I found out. Walking through the house, all the windows open to let in cool air before the heat of the day, I heard a terrible screeching and shrieking of birds. Oh damn, I thought, one of my cats has caught a baby bird, and I threw on some shoes & went out for a rescue.

But it wasn't my cat at all, it was one of the many neighborhood grey cats, on the street corner across from our house, having it out with my quail pair! This corner is covered with a deep, prickly, overgrown mat of juniper shrubs, and probably looked like great cover for a nest. Unfortunately, the nest had been discovered by the grey cat and the quail family was in complete disarray. The parent birds were on the ground, flying at the cat, which seemed to have confused it momentarily.

I ran across and chased the cat away, then went back into the street to watch the spectacle. Oh my word. The juniper bushes come right down to the street on one side, then give way to a rock wall and a bare gravel area in front of the house on the other side. The quail mother was down in the gravel, leading a covey of the tiniest babies I have ever seen, down along the rock wall away from the corner, to safety. The quail father was up on the rock wall above, encouraging them all, and the stream of babies out of the bushes seemed endless. Eventually I counted 15, maybe 16, and they were trying their best to follow mom, but they must have just hatched. They could barely stand up, much less run along behind mom. 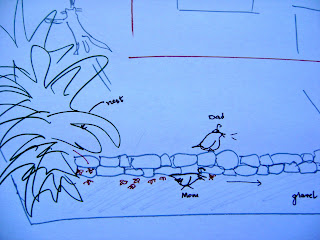 The line of cheeping, tumbling, falling, flopping babies stretched out farther and farther behind mom and dad. More kept popping out of the bushes, long after the parents were out of sight. The father kept up a constant cry of kadoo, kadoo, while the mother made encouraging chirping mom noises, and most of the babies were headed in the right direction.

It was hot and sunny and empty, out there along the rock wall, and a few got confused and turned back the wrong way. Some stumbled out into the gravel and fell over, exhausted. Still more came out of the bushes. I couldn't stand to watch, so I ran in and picked up two that had staggered behind a rock or twig, gotten stuck and frozen. They couldn't have been more than an inch long, each. I could have fit a half dozen in my hand without crowding them.

I followed the head of the parade at a distance, along the entire first yard, across the driveway of the next, and into the next yard. By then the parents had disappeared into the grass and I set my babies down to head for mom. The parents kept jumping up onto the rock wall, not understanding the babies couldn't do the same. They were game, though, and kept on, across the vast, hot waste of the asphalt driveway, up next to the second neighbor's rock wall and eventually onto the path next to the front of the house.

Meanwhile, I returned to the nest site, sure I had seen a couple going back that way. Despite walking slowly, looking carefully and peering into every cranny, I still missed two! Their camouflage is so perfect, they even disappeared into gravel of a different color. I rounded up the last singleton and went to find the parents.

Uh oh, I couldn't see them, and the male was by now on top of the roof of the neighbor's house, trying to chase dangerous me away. No sound of mom and babies. Then, as I walked up towards the front porch, I saw her. She was wedged into the farthest corner of flower bed, in the triangle between the house and the porch, with her wings outspread to make an amazing feathered fan. She didn't look like a bird at all, but some kind of abstract, geometric drawing. All I could see was a triangle of wings and her two beady little eyes locked on mine, daring me to get at her babies. 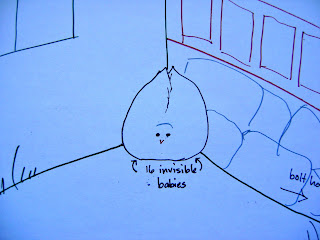 I bent over to set down the final chick, and as soon as it peeped, another popped out from right under my feet. The mother chirruped and both babies ran towards her. She lifted up her wings and I could see the whole brood, tucked underneath. More than a dozen tiny heads peeped out. Then she broke and ran, followed by the now compact stream of babies, along the base of the porch and into a hole beneath. Vanished!

I checked for stragglers as I returned to the corner, and crossed the street for home, but I think they were all accounted for. I chased the grey cat away again, and haven't seen him since.

i'm still amazed by the whole episode. I suppose I was interfering in what should have been a process of natural selection -- those babies not able to keep up were meant to die. But I figure domestic cats are not meant to be a part of a quail's normal environment, and perhaps my rescuing a small part of the flock will make up for that a bit.

I am left with a sense of wonder at the fragility and toughness of these tiny creatures. They can't have been more than a day old, down barely dry, and yet most of them managed to follow their parents across a vast distance of alien, hostile terrain without help from me.

I don't know what I would have done if I had been left holding the last wee chick, unable to find the parents. I suppose I would have tried to put it under one of my hens. Fortunately, it didn't come to that. I am merely a proud quail auntie with no further responsibilities. But I'm keeping my eye out for that gray cat.
Posted by Unknown at 2:05 PM