Goodbye to the Three Sisters 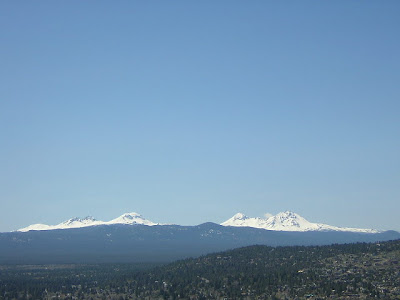 No, not The Three Sisters, the familiar mountains seen on our evening skyline about 20 miles west of town. They are still there, in all their snowy winter whiteness.

The Three Sisters I refer to are -- or were -- three tall white birch trees that we inherited with the rest of the plantings, when we moved into this house 32 years ago. We loved them, with their graceful, pendant branches of bright green leaves that turned a glowing yellow in the fall; their white papery bark that contrasted with summer grass and shone silver on sunny winter days.

European white birch, Betula pendula, was a popular landscaping choice in Bend gardens in the first half of the 20th Century. The previous owner of our house probably planted these three, nicely clumped together in the middle of the lawn, in the early 1960's, right after our house was built. Birches are not long-lived trees at best, and have their character flaws. As we discovered soon enough.

After our initial oohings and aaaahings over our beautiful trees, we discovered that birch trees are messy and brittle! They drop a continuous litter of twigs, branchlets and alas -- aphid rain. Better known as honeydew. I think it's really aphid pee. This falls as a continuous light spray on anything and everything (and everybody) standing within range of the branch canopy. It creates a clear coating of sticky stuff which then turns black. Charming.

Still, as a true laissez faire (ie fairly lazy) gardener, I learned that if I just waited a month or so, the local ladybugs would crank up on laying eggs, babies would hatch and soon devour most of the aphids by summer's end. Plus, the honeydew is basically sugar, so it rinses off with a stream of water from a hose.

And so the seasons came and went, all of us happy here in the forests of Northern Russia. I mean, here in the desert of Central Oregon. Hmmm -- what's wrong with this picture? Let's see, how are those two climates similar? Siberia: long, cold winters with cool, wet summers vs Bend: not-so-long, dry winters, with hot, dry summers.......

The trees did ok for a long while, but a few years ago they began to get The Dwindles. Branches started turning black and dying, every year a few more. Our tree guy, Andy, came out to prune off the dead branches (before they fell on us) and look for causes. No bugs, no obvious diseases.

Year by year the branches died, and then the tops starting dying. Bronze birch borers struck the county hard, and countless huge, mature birch trees around town died practically overnight and were cut down. Andy looked and looked but couldn't find any borers in our trees. The mystery deepened.

Finally this year I had had enough of the increasingly pathetic-looking trees. All three tops were dead and their demise seemed inevitable. 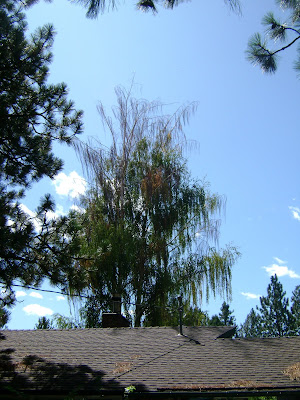 We concluded that the trees had suffered stress over the past 10 years, following a careful, but apparently not quite careful enough, house expansion which put the walls within 10 feet of the tree trunks. They looked lovely through the living room window. But alas, the trees were not happy.

So we called in the tree wizard and his crew (Andy's Gang) and they arrived bright and early yesterday morning to take down the Three Sisters. One last shot of the trees, from garden level: 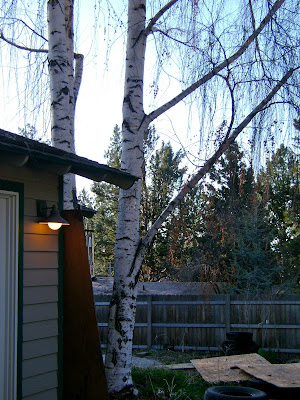 Then the lads put tires and plywood sheeting over the garden and windows. 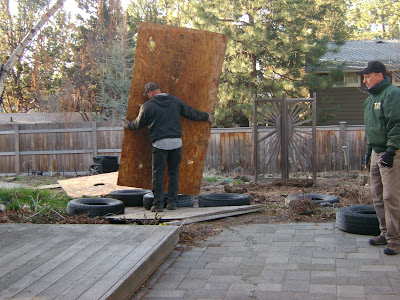 One down, two to go 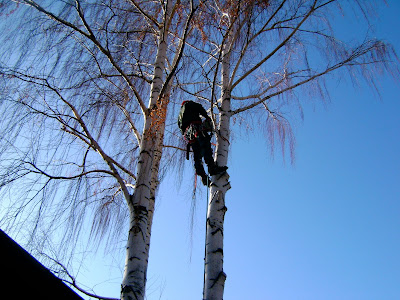 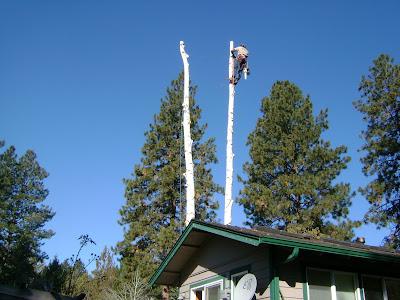 It was quite exciting to watch. Mark, up in the tree, tied each section to a rope before cutting, then lowered it, using a pulley attached to the other tree, to Steve, the catcher, below. 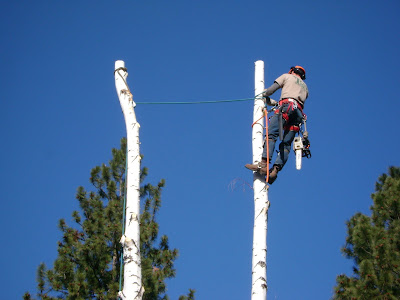 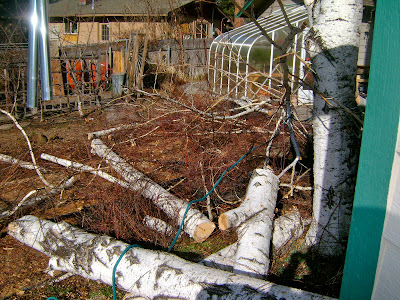 a giant pile of pick-up-sticks? 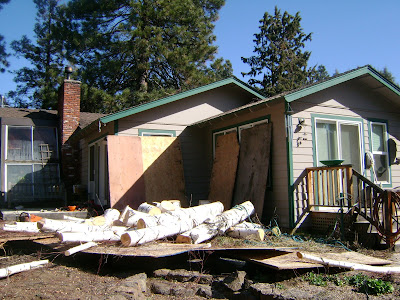 Steve cut up the logs into rounds 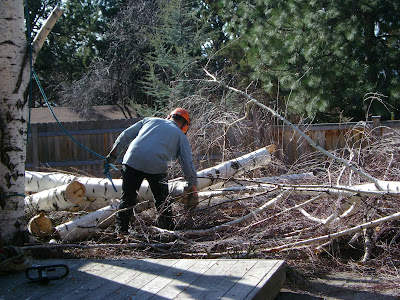 stacked them for firewood 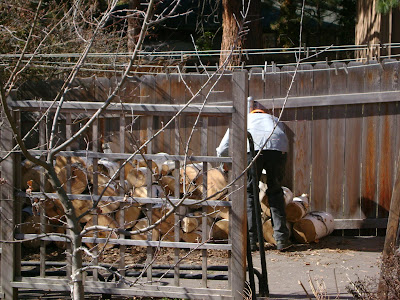 and hauled the branchlets to the chipper (aptly named 'Tornado' brand) 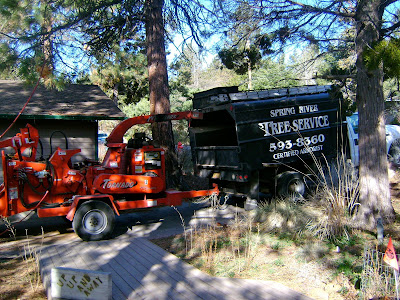 Not everyone was pleased with the events of the day. The Brave Rupert hid under the bed. Alex went under too, to see what was happening. 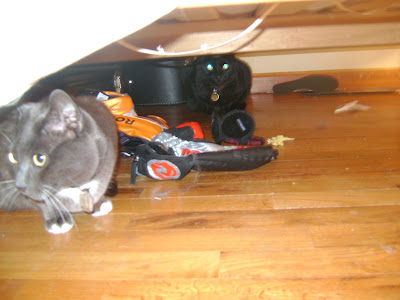 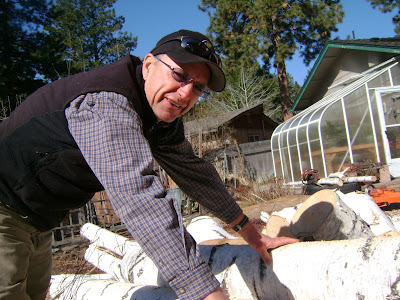 The results? Here are some Before and After photos for comparison. 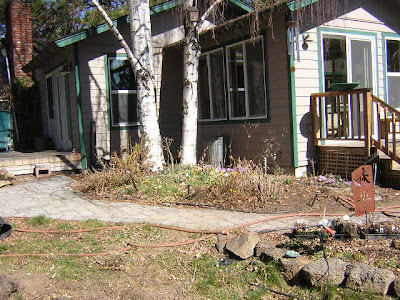 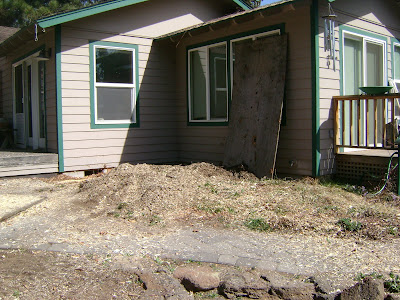 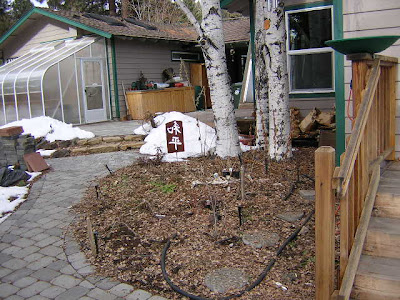 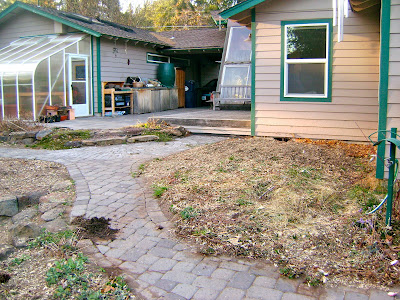 The verdict? I LOVE the new look! Lots of light, lots of space, and hmm, a new place to play.
Posted by Unknown at 10:05 PM