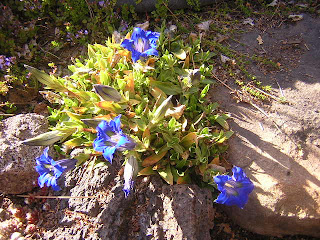 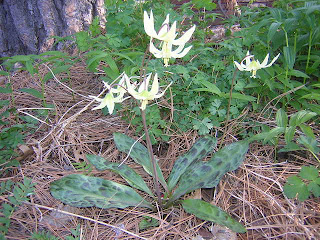 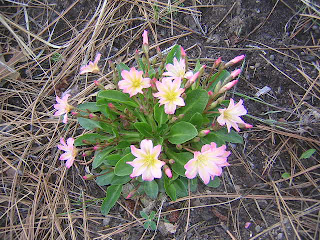 Every year I have a certain amount of amnesia about what I have growing in my garden. Some of this is the result of an aging memory. I still have vivid memories of plants long departed. The glorious old apple tree that was here when we moved in, which created a heavenly cloud of blossom each May -- until it developed some kind of slow, creeping death and had to be cut down anyway to make way for a house addition. I used to climb up into the tree and lean, eyes closed, against the trunk, breathing in the delicate fragrance of hundreds of pale pink blooms, and drinking in the sound of hundreds of happy honeybees.

I still miss that tree. I have planted three smaller apple trees nearby, but they are still young and will never reach the size of that old girl, being only semi-dwarf varieties.

Some of the amnesia comes from distraction -- spending the winter focused on a much smaller, indoor green world: my (mostly) unheated tiny greenhouses, where I carry over geraniums and fuchsias and begonias, and my dining room windowsill, where I abuse my collection of long-suffering orchids.

The shift to the larger, outdoor garden is gradual, and in the spring I greet each new sprout with joy and sometimes, as this year, a certain amount of surprise.

Being a lifelong procrastinator and perfectionist, I struggle with the annual opposing pulls of 'get out! plant something! it's spring!' and 'no, gotta make a plan first. the perfect plan. can't do anything until I know everything.'

As a result of this, I often have vast numbers of sad, patient (except for the ones that give up and croak) containers full of perennials, waiting to be planted. I have to admit that in the past, some things have waited YEARS before finally getting into the ground.

Well, there are some advantages to this, er, system. Anything that survives our winters in a container is pretty much hardy. I have also accidentally created a few 'bonsai' this way.

Last year I was exceptionally piggish in the annual spring nursery forays, and had a large collection of mostly native perennials languishing beside the back door for much of the summer. Last fall our normally glorious, long Indian Summer continued well into November, and even into early December. This allowed me to actually plant everything still in their nursery pots.

The final push came on the eve of a predicted light snowfall, to be followed by near-zero degrees (F) temperatures. I planted 50+ perennials, shrubs, and wildflower seed varieties in 2 days. Actually, 'slammed into the ground' would be a better description. As darkness fell on Dec 12, I literally threw the last seeds around, labelling only some of them, then sprinted into the back garden to dig the last carrots. The first snowflakes were white on the ground when I finally made it inside. Whew.

After that it snowed, then got really cold and that was it. Winter happened. An unusually late, cool, dry spring has followed, with everything greening up and leafing out and blooming much more slowly than in the average year.

And I keep finding surprises like the ones in the photos above. Things I forgot I had planted, like the Lewisia tweedyii (bottom photo), native to the Wenatchee Mountains in Washington state, that I got from my friend David Stetson, and the Erythronium sp I bought from a guy at the Eugene Farmer's Market over 10 years ago. Others, like the unnamed gentian in the top photo, just knock me out every year with their intense, heart-stopping blue color.

Today I expect my other heart-grabbingly blue plant, Penstemon nitidis, to open.

Meanwhile, it's back out to the front yard to see what other surprises I might have waiting for me.
Posted by Unknown at 6:46 AM